Art & Culture Arts
TOP“I Have To Be Myself”: Why Comedian Shiori Fujiwara is Dropping her Stage Name and Swapping Japan for Italy “I Have To Be Myself”: Why Comedian Shiori Fujiwara is Dropping her Stage Name and Swapping Japan for Italy

It’s been more than three years since the release of Shiori Fujiwara’s “3.5 Billion” hit comedy routine and in that time the popular entertainer hasn’t really changed that much. It’s to be expected, though. “If you try to stifle yourself,” she explains, “or push your true self down, then your heart will become sick. That’s why I have to be myself.” Indeed, talking to TW at the Italian ambassador’s residence in Tokyo, Fujiwara was as poised, confident and at ease with herself as she was in her 2017 sketch. Performed under the stage name, Chiemi Buruzon, it saw Fujiwara acting as a confident career woman who threw documents around for her eye-candy subordinates to pick up and so on. She would compare her character to a flower that refuses to chase the bee, and men to gum that you throw away when it loses its flavor before moving on to a new piece. Then, as she reminded everyone that it’s all okay because “there are 3.5 billion men” in the world, her underlings would take off their shirts, exposing the title of the routine written on their backs.

The combination of Fujiwara’s unbridled confidence and her rejection of female subservience, which still permeates the Japanese workplace, resonated with audiences across Japan. In short time, “3.5 Billion” was nominated for Japan’s buzzword of the year at the 2017 U-Can Shingo Ryukogo Taisho (2017 U-Can New Words and Buzzword Awards) while Fujiwara herself appeared on the popular Fuji TV series Hito wa Mitame ga 100 Percent (“It’s All About the Looks”) and accumulated millions of Instagram followers.

Fast forward to the present and the performer is preparing for the next chapter of her life, which will be written outside Japan after she uproots her life and moves to Italy. “Two years ago,” she says, “I went privately to Italy, visiting Rome, Florence and Milan, and it wasn’t exactly love at first sight but I felt, deep inside me, that I want to live there. There are so many things I want to do in Italy but it’s like having a crush on someone, you know? You don’t really need a reason to want to be near that person.”

“It wasn’t exactly love at first sight but I felt, deep inside me, that I want to live there”

That’s not to say Fujiwara is moving abroad without a plan. Her goal is to start a series of YouTube videos about her life in Italy. “I think that a lot of people would be very interested in that, especially young people like those who want to study in Europe or just travel through it. This would be a channel for them. They’d learn all about living in a foreign country from the videos. Maybe I’ll discover another reason to be in Italy once I actually start living there. But getting there is the most important thing right now.” Besides her home country, another thing that Fujiwara is planning to leave behind is the name Chiemi Buruzon. Although that’s the moniker by which most fans know her, the performer won’t be able to use it after she leaves her current talent agency and heads off on her solo European adventure. It may seem like a small thing but it will in fact be a huge change.

“I actually started to feel that my real name, Shiori Fujiwara, was too girly. It didn’t feel like me”

“It feels sad and a little lonely to abandon that name. It might have come to me in an instant – a colleague at my agency came up with it in, like, three seconds – but over time I think I became Chiemi Buruzon. That persona was more real to me than my real name. I actually started to feel that my real name, Shiori Fujiwara, was too girly. It didn’t feel like me. Shiori is a little girl, and that’s just not me. I’m almost 30 so I’ve been trying to catch up to the idea of being Shiori Fujiwara in my mind, but I don’t know if I’m there yet.”

Fujiwara did consider a different stage name, possibly another one based on clothes (a “blouson,” pronounced “buruzon” in Japanese, is a short loose-fitting jacket) such as “Shiori Cardigan.” But she decided against it in order to start her new life on the right foot. “Now I’m letting go of Chiemi Buruzon and entering life without a lie in it. I want to live … honestly.”

“A lot of people think of me as just a comedian,” she adds, expanding on the legacy of her stage name and leaving the past behind. “They think I should stick to comedy. But that’s so limiting. I want to do a lot of things in my life. I want to have a lot of fun, try a little bit of everything and leave my mark across many different areas. I do hope to reach a lot of young people and show them the kind of person they may hope to become one day. I want them to get excited about the future, about their future. To get excited about life. That’s what I hope to achieve with my videos.”

But, of course, it’s not like Fujiwara is heading to Italy just for the benefit of others. There are many things there that she cannot wait to experience on a daily basis, from gnocchi dumplings to historical sites, authentic Italian cafés, operas… “I am very Japanese,” she says. “Punctual to a fault. And I think that going to Italy and living there will help me relax more and become less Japanese, but in a good way. I am also learning Italian. My favorite words must be bravissimo or favolosa. The second one means fabulous. What I love about Italian is that it’s so cheerful and energetic. You also really have to use your hands while talking but luckily that’s how I speak Japanese.” [Laughs]

Even with all that to look forward to, a move halfway across the world is a huge undertaking that’s going to require a lot of willpower. In the past, Fujiwara derived a lot of that kind of energy from her name, which she admits sounded strong and powerful, “like someone who never gives up.” But even as Shiori Fujiwara, there’s no doubt that she will continue to be unwavering about her new path in life because it is exactly what she wants to do.

“That’s my ultimate goal in life. To do what I want with my life, and I can’t let anyone stand in the way of that. All over the world, there are negative people who will try to bring you down. I’ve dealt with them all my life, like when I decided to quit university or to become an entertainer. A lot of people were telling me that I wouldn’t make it. If I’d listened to them then, Chiemi Buruzon would never have existed. It’s important to listen to people’s advice but you can’t ignore your heart. That’s where you’ll find the answer to your most pressing questions. Believe in yourself. And if you feel unsure or anxious about your life, contact me. DM me. Whatever. I will always support your dreams.” 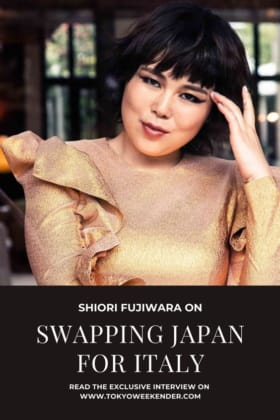