He’s the number-one ranked male climber on the planet, the current world champion and world cup holder in the combined event (speed climbing, bouldering and lead). So, in Tokyo this summer, anything less than a top-place finish for 23-year-old Tomoa Narasaki would be seen as a disappointment.

With the Games just months away, is the man nicknamed “Ninja” starting to feel the pressure?

“I suffered badly with nerves when I was younger,” admits Narasaki. “I overthought things, focusing too much on potential negatives. It made me stiff going into competitions. These days, I still have butterflies, but it’s a positive energy.”

“I visualize finishing on top of the podium and imagine how I would feel if I could win,” continues the climber. “To be successful I feel I need to have that thought process. It gives me confidence. That’s what will be going through my mind before the tournament begins in Tokyo. My objective is to win gold and I believe I can do it.” From a young age, Narasaki dreamed about becoming a sports star. At elementary school, he took up artistic gymnastics but stopped in the fourth grade because he suddenly found one of the routines daunting.

Searching for something new, he decided to take up climbing after watching his older brother – and his younger sibling also soon followed suit. Enjoying the sense of freedom climbing gave him, he steadily improved and at 16 represented Japan at the World Youth Championships, finishing fourth in the lead event. Two years later, he decided to turn pro.

“I was told to give it a go for two years and if things didn’t work out, then I should go to university, though what I would have studied I don’t know”

“My parents were supportive,” recalls Narasaki. “At the same time, they were naturally cautious as it’s not exactly a reliable profession. I was told to give it a go for two years and if things didn’t work out, then I should go to university, though what I would have studied I don’t know.” [Laughs]

His first major tournament as a professional was at the 2014 Climbing World Championships in Germany where he finished 10th in the bouldering event. “While it wasn’t exactly the result I was hoping for, it did give me a good insight into the kind of level I would be competing against. I felt at that point I was capable of winning in the future,” he says.

Narasaki’s self-belief certainly wasn’t misplaced. After winning domestic and Asian junior titles, his breakthrough year as a professional came in 2016 when he lifted the bouldering Climbing World Cup (an annual competition that takes place in a variety of cities over several weeks) for the first time.

He followed that up by taking home the gold in the same discipline at the Climbing World Championships in Paris where he finished ahead of the Czech Republic’s Adam Ondra, a man described as the “leading climber of his generation.”

A month before Narasaki’s victory in France came the news that climbing would be one of five sports added to the 2020 Olympics program. Though its inclusion was generally welcomed, many were disappointed that the proposed format featured just one event each for male and female competitors (it will be two each at the 2024 Paris Olympics).

The decision to combine the three main disciplines of lead climbing, speed climbing and bouldering has been criticized by various competitors such as American climber Lynn Hill who said it was like “asking a middle-distance runner to compete in the sprint.”

“The challenge is tough because the three disciplines require different skill sets, but that’s something I enjoy”

Narasaki, however, sees it as an exciting prospect. “The challenge is tough because the three disciplines require different skill sets, but that’s something I enjoy,” he tells TW. “There’s a lot of work involved. At the moment, I’m training five days a week. I usually start at around 10 or 11 in the morning with some speed exercises. Then, after lunch, I move on to bouldering before finishing with lead in the evening. It will be the same order at the Olympics.”

Of the three disciplines, bouldering is arguably his strongest while speed climbing is the where he tends to finish lower down the field. Preparing for the Games this summer, the Japanese athlete is trying to devote an equal amount of time to each category and is happy with the way preparations are going.

Since 2017, he has lifted two world cups in the combined event and last year triumphed at the Climbing World Championships in Hachioji, a competition that also served as a qualifying event for the Olympics with the top seven climbers automatically gaining a spot at the Games.

“I finished outside the medals at the previous championship in Austria after a false start in speed climbing, so I was determined to make up for that in Japan,” says Narasaki. “The fact that there were Olympic places up for grabs gave the tournament an extra edge but for me, it was all about winning my first combined world title.”

The victory elevated the Ninja to the top of the world rankings above Ondra and Austria’s Jakob Schubert, the two men he feels could present the biggest threat in Tokyo. The 23-year-old also expects a tough challenge from competitors closer to home, though there is some confusion as to how many places will be available for Japan at the Games.

Initially, it was said to be two spots for the host nation with Kai Harada securing the second one in the men’s competition, however, there is a possibility that the allocation could increase, keeping alive the dreams of athletes such as Kokoro Fujii and Narasaki’s brother, Meichi.

“Climbing in this country is so strong right now,” opines Narasaki. “We have many men and women who are capable of contesting for medals, it’s a shame for those that have to miss out. Of course, it would be amazing to go up against my brother on the biggest stage as we often train together and enjoy the rivalry. That said, I’ll be happy for whoever makes the team.”

“There is a close bond between the Japanese climbers,” adds the Utsunomiya native. “In between competitions, we play games together, go out for dinner, that kind of thing. We always support each other and it will be the same in Tokyo even though everyone will be focused on their own performance. Hopefully, we’ll have some medals to show for it at the end.” 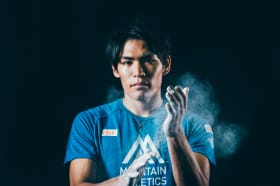 Miho Nonaka
A rising star in sport climbing, Miho Nonaka won her first bouldering title at the Climbing World Cup in 2018. She has finished in fifth place in the combined competition at the last two Climbing World Championships.

Kai Harada
A surprise winner in the bouldering category of the 2018 Climbing World Championships, Kai Harada finished just outside the medals in the combined event at the 2019 tournament in Hachioji.

Meichi Narasaki and Kokoro Fujii also finished in the top 10 in the men’s combined event at the 2019 Climbing World Championships, as did Ai Mori and Futaba Ito in the women’s competition, underlining Japan’s strength in climbing.