The Great East Japan Earthquake of 2011, the vicious tsunami that followed it and the widespread destruction left in their wake, dominated global headlines that year. Eight years on, the cities along Honshu’s northeast Pacific coastline are still in the throes of recovery.

Miracle Pine, a lone pine tree on the shores of Rikuzentakata City that stood resolute in the face of monstrous waves that destroyed every one of its brethren, has become a symbol of the recovery. I visited this most unlikely of monuments in late August to get a gauge for how the city is coping with the reconstruction, and to learn about the significance of Miracle Pine. Reconstruction is most certainly the word of the day in Rikuzentakata, an Iwate Prefecture fishing village of approximately 20,000. Everywhere you look, the land is barren, populated with temporary housing, scaffolding and heavy machinery. Diggers, compactors and wheel loaders trundle around shifting and shaping the turf in large, empty lots. Builders and form workers clad in hardhats potter about with power tools, measuring devices and clipboards. Everything is somewhere between beginning construction and half-built.

But half-built is something; which, I think most of us would freely concede, is better than nothing. It signifies progress, while being an ever-present reminder that the job is far from done.

Takashi Igosawa, reconstruction promotion section chief from Iwate Prefecture’s Recovery Bureau, says the reconstruction is about “sending a message to future generations.” As such, one of their key focus areas is disaster prevention.

Rikuzentakata suffers from a couple of geographical factors: it’s mountainous – what little flat land they have is by the sea – resulting in a dense population, and it just happens to be located along one of the world’s most tectonically active plate boundaries. This is a recipe for “natural” disaster, but it hasn’t deterred the local authorities from devising a comprehensive future plan for the city. The deputy mayor of the city, Masayuki Okamoto, emphasizes that the reconstruction goals are aimed at “creating a better city,” while ensuring the “safety of current and future generations.” Putting the Plan into Action

While the 2011 earthquake was a mighty tremor indeed at magnitude 9.0 – a record for Japan – it was the subsequent tsunami that caused most of the damage. To that end, building new tidal walls, raising the ground level of the city and constructing buildings on raised foundations are integral parts of the plan. Along the coastline a huge sloping sea wall has been erected with a latticework of metal designed to slow the progress of water in the event that another tsunami breaches it. And under-construction raised levees can be seen cushioning the urban limits.

The plan equally focuses on reconstructing and improving damaged transport networks along the coastline, re-establishing affected local businesses and empowering the disaster-struck agricultural and fishing industries which used to thrive in the area. Hospitals and mental health facilities have also been moved to less disaster-prone locations.

There is a hope that these collective efforts will foster a better environment for tourists which, in the age of the dark tourism trend, have steadily increased since the tsunami struck. 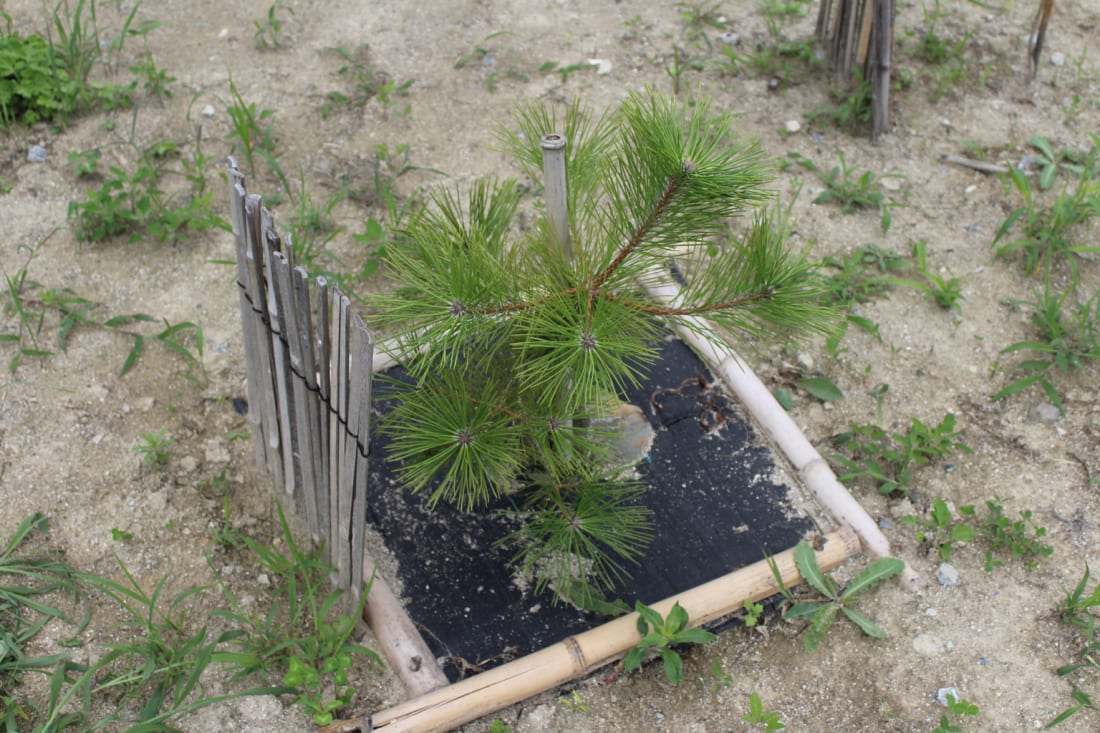 The Takatamatsubara Memorial Park for Tsunami Disaster, the location of Miracle Pine, has become a beacon of hope for the affected populous. The thin-trunked palm tree, one of 70,000 along the Rikuzentakata coastline, was “miraculously” the only one to withstand the force of the tsunami – to put it into perspective, the waves were, at times, as high as 40 meters and travelling well over 400 mph. How the tree managed to stay upright, genuinely beggars belief.

Though the tree’s roots had been poisoned by salt water, the base of the tree remained relatively unscathed. The tree was taken down and embalmed to prevent it from decay, before a metallic rod was erected through the hollowed-out trunk in the same – now slightly curved – shape of the pine. It is this taxidermized version of Miracle Pine that we see today, rising triumphantly towards the heavens from the flat ground beneath. Says Deputy Mayor Okamoto, “We want to use it as a memory of Rikuzentakata City.”

While Miracle Pine is the indelible symbol of the park, the entire area will be designated as a national park set to open in September 2022. The park, designed in the same style as Hiroshima’s Peace Memorial Park, will be filled with open stretches of greenery and lakes connected by bridges and a promenade along the sea wall, while groves of newly-planted pines will bank the waters’ edge. Along with Miracle Pine, there will be a museum-style memorial building on the site (which has yet to be officially named).

The recovery of Rikuzentakata is far from complete, but the current efforts and dedication are inspiring to behold. And when doubts are cast, they can always look to Miracle Pine as a constant reminder that extraordinary things can happen.