Opening the packages storing the prints of his latest artwork was like a neo-Tokyo, cyberpunk Christmas for Mad Dog Jones. Here in Tokyo was the first time the Toronto-based artist held in his hands many of the neon- and citrus-toned pieces he created over the past two years.

“I can’t think of a place that I would be more excited to launch my career than here,” says Jones, surrounded by 15 of his prints the day before his world premiere exhibition at Diesel Art Gallery in Shibuya. Throughout history struggling artists have gravitated to whatever medium was available to them to grab the attention of their audience. Jean Paul Basquiat sold homemade postcards on the streets of Brooklyn. Banksy started as a freehand graffiti artist in Bristol.

Today, Instagram has served as a boon for designers and photographers looking to showcase their work. Groundbreaking (Canadian) digital artists like Mad Dog Jones, FvckRender and Victor Mosquera are making the most of modern technology to create futuristic art.

“I started my style for Instagram,” says Jones (whose moniker is an anagram of sorts of his given name, Michah Dowbak). “I was like, if I want to do this professionally, what do I need to do? Well, I need to get a bunch of followers on Instagram. I need to get people excited about my art.” Jones’ artwork starts as photographs or hand drawings of urban viscera such as buildings, street signs or traffic pylons which he then morphs through collage, coloring and illustrating into a cyberpunk scene on his iPad.

With short-cropped red hair and beard, Jones is like a hip-hop Vincent Van Gogh wearing Adidas Samba sneakers and rose-tinted glasses as he peruses his artwork hanging on a gallery wall for the first time. (Since all of Jones’ artwork is originally backlit, he says he was nervous how the images would appear in print.)

Each image has a specific story, and Jones points out the whimsical piece, “I’m sure the cat is fine.” A missing cat notice (written in French) is posted to a Tokyo traffic sign, and in Jones’ imagination he envisions the conversation between the couple that own the cat (Gaston), one of them in near apocalyptic fear about the feline’s fate, while the other nonchalantly says, “I’m sure the cat’s fine.” For the exhibition’s signature piece, “Citrus,” Jones photographed the model at a studio in his apartment, and then created an urban landscape through photographs he snapped of eight different buildings.

Yet natural elements are a critical aesthetic to Jones’ visionary dreamworlds. He says the mess of overhead powerlines in the piece “Internal Reflection” are like a fallen birch tree, with gangly branches cascading down. The light reflecting off the windows of the towering building shimmer like the surface of a pristine lake.

“People mimic nature a lot more than they realize,” he says. “The way a river cuts across an old stone bed. We are using those curves in a stairway. Those natural bends come in a subway tunnel.” By the Shores of Lake Superior

Jones’ Instagram account, launched in 2017, is rapidly approaching 200,000 followers, nearly twice the population of his hometown of Thunder Bay in Ontario. Growing up at the former French trading post on the banks of Lake Superior, Jones’ childhood was embedded in nature, with days spent hiking the trails and paddling a canoe through the hundreds of lakes that make up the nearby Quetico Provincial Park.

Jones’ father is a stained-glass artist and professional musician who built the family home with the help of friends on 75 acres of old-growth forest. The house is 100 percent wood-heated throughout the Canadian winter, and neighbors include beaver, deer, black bear and moose.

“I am really lucky to have a family that is so artistic, and that’s really allowed me to be confident in pursuing art,” says Jones. “I really lived off day-old doughnuts and on a shoestring budget for years to be an artist. I truly grinded.” Top of the Charts

On the opposite shore of Lake Superior at the University of Guelph Jones earned his degree with honors in human kinetics. His first job was helping seniors at a care center run through their daily exercises (“I loved it”).

While art was always with him, so was music and for two years he recorded and toured as DJ, keyboardist and percussionist with fellow Thunder Bay native Coleman Hell. Their 2015 song “2 Heads,” a club anthem with a folk banjo hook, went quadruple platinum in Canada and reached number five on Billboard’s US alternative rock chart. The North American tour saw the group share the road with Robert DeLong and Twenty One Pilots. Along with Hell and fellow Canadian artists La+ch and Shan Vincent De Paul, Jones founded the Toronto-based collective Sideways (whose name is tattooed across Jones’ left forearm).

His illustrations, many following the stained-glass patterns he learned from his father, started to gain traction, and he was contacted through DM to produce artwork for Maroon 5. When the tour ended, the Mad Dog Jones Instagram account was launched. 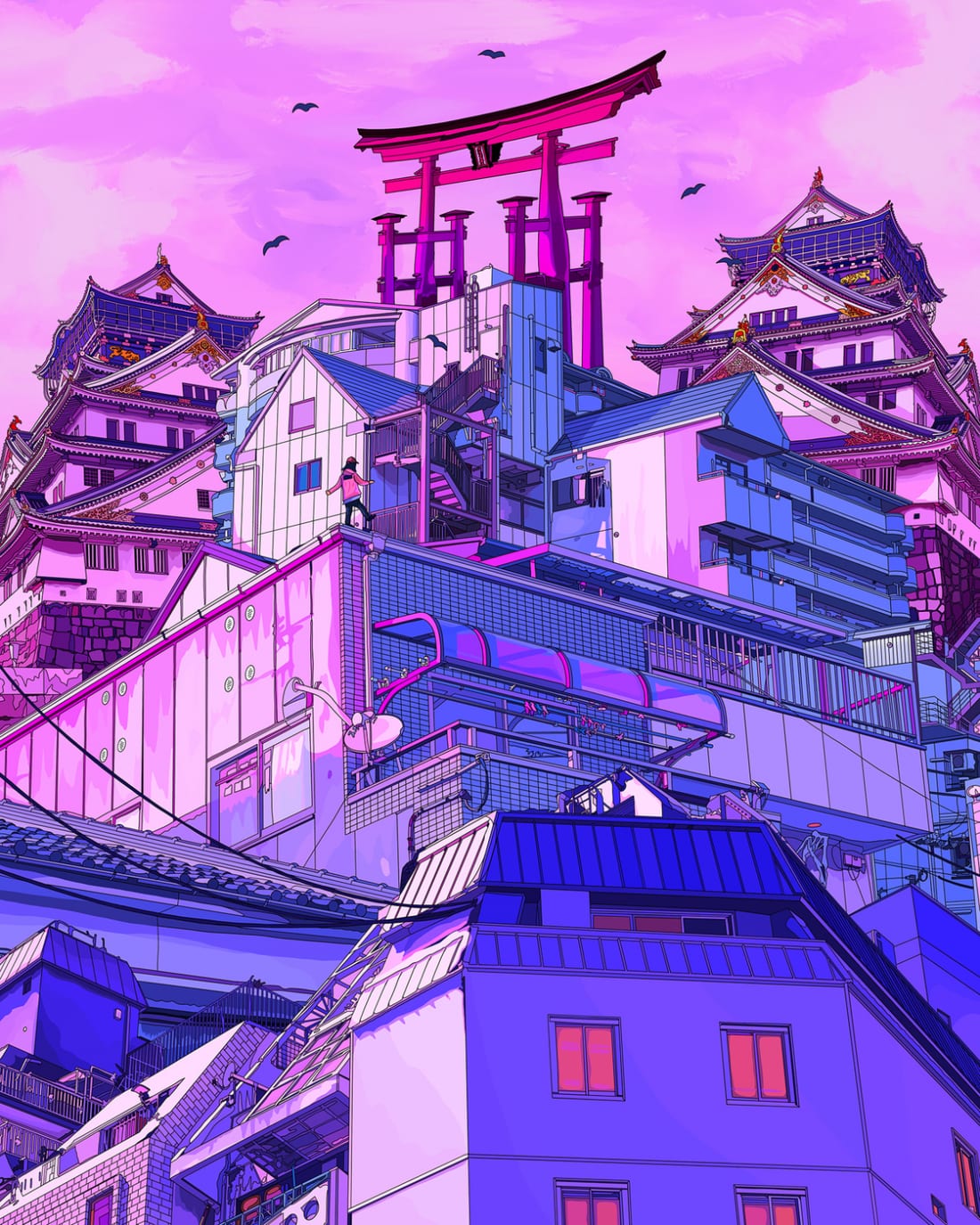 Following his Tokyo exhibition, Jones says he will continue to release new art on his Instagram account, but he will also look to expand into other art galleries, enhancing the value of the physical pieces by producing a limited number. He says he is also interested in moving into the worlds of fashion and music video.

In the meantime, he roams Tokyo back alleys with his camera, finding bicycle spokes and tire rims to take pictures of during golden hour. He says he loves the way intentionality of design is created by the city’s denizens, such as the elegant coordination of a flower garden to match the surrounding buildings.

“Sometimes it’s just really cool to appreciate what this humble humanoid has made and built over the last 2,000 years and just where we have gone,” says Jones. “Especially in Tokyo.”