How to avoid the post-festive-season anticlimax? Start planning your next holiday now with our roundup of extraordinary destinations.

Established in 1977, this private garden is only open to the public for a few weeks between late April and mid-May, and during maple leaf season in autumn. Located deep in the mountains of Kitakyushu, visitors can enjoy two beautiful wisteria tunnels and various other structures featuring more than 20 varieties of the flower including some blossoming trees which are over 100 years old. The admission price varies depending on the bloom of the flowers, but it’s well worth the cost and the effort to reach the remote location in order
to experience the spectacular violet canopies overhead.

How to Get There: The most convenient way to visit is to rent a car from Fukuoka, with the drive from there taking just over an hour. However, considering traffic jams and parking problems, it might be a better idea to take public transport. Head to Yahata Station, then catch a bus to Kamishigeta, and walk for approximately 50 minutes to the garden. Make sure to thoroughly plan your route and check the opening times in advance, and if you want to avoid the crowds, then try to avoid a weekend trip. During peak season, tickets (¥500-¥1,500) must be bought in advance too. kawachi-fujien.com The appropriately named Hell Valley is just a 20-minute walk from the Noboribetsu Onsen town, providing magnificent landscapes clouded in bursts of ominous steam. There are several walking trails around the hills and valley incorporating the various local sights and natural attractions. Nearby volcanic activity is the source of the area’s hot steam vents, spring waters, and Oyunuma, a sulfurous pond (with a temperature of around 50 degrees Celcius) that creates natural hot streams flowing through the forest – perfect for a mid-hike footbath to revive tired feet. The most popular time to visit is around mid-October when the autumn colors reach their peak, and just before the first snow fall arrives. Whilst the hot springs are open all year round, take into account that some of the higher trails might not be accessible during the winter months.

How to Get There: If you’re arriving at New Chitose Airport you can take an Airport Limousine Bus directly to the Noboribetsu Onsen, or drive from Sapporo City in approximately 90 minutes. noboribetsu-spa.jp Edo Towns Magome and Tsumago in the Kiso Valley, Nagano

Magome and Tsumago are old post towns along Nakasendou, an ancient road connecting Tokyo and Kyoto during the Edo period. Both towns have preserved their historical charms, with electrical wires and modern conveniences mostly hidden from view, creating an almost authentic Edo atmosphere (don’t worry, the ryokan inns are up to speed with all mod cons). The high end of Magome offers panoramic views over the mountains, but while picturesque, it has a more touristy feel in comparison to Tsumago, which boasts a shrine, temple and castle amongst its assets. If trekking in the outdoors is your thing, then you can follow an eight-kilometer walking trail connecting the two towns, with a handy luggage forwarding service offered at each of the local tourist offices. Download an English hiking map at tinyurl.com/TWnakasendou-hike

How to Get There: Despite the rural setting, there are multiple ways to access the area. Highway buses to Magome run from Nagoya (90 minutes) and Tokyo (around 4.5 hours), or you can take the shinkansen followed by local trains to Nagiso via Nakatsugawa. Local bus services and taxis also operate between the towns and nearby stations. Palm trees, a warm climate all year round, and a jungle habitat – and all just an hour’s flight from Tokyo. If you’re looking for an alternative to an Okinawan getaway, then Hachijojima, the southernmost of the Izu islands, can offer you a slice of paradise surprisingly close to Tokyo. This unique subtropical island has cinematic ocean views, lush green mountains, and volcanic terrain with incredible scenery surrounding you in every direction. You can enjoy a wide variety of activities from diving and snorkeling with tropical fish amongst the coral to relaxing in one of the many natural onsen baths. Cultural attractions include the Native History and Traditional Crafts Museum, and the Osato district, which preserves some of the island’s darker history as an exile for criminals. If you’re still wanting more, how about a botanical park exhibiting rare glowing bioluminescent mushrooms?

How to Get There: The island has its own airport with three flights a day from Haneda Airport, but if you have time to spare and fancy relaxing on the water then you can take the 10.5-hour overnight Tokai Kisen ferry from Tokyo’s Takeshiba Terminal. tokaikisen.co.jp/english/ A UNESCO World Heritage location incorporating Japan’s tallest waterfall (133m) and a series of religious sites including Kumano Nachi Taisha Shrine and the majestic three-story Seigantoji Pagoda. The close proximity of the structures is a rare example of the harmonious amalgamation of Buddhism and Shinto (known as shinbutsu shugo), which was commonplace before the two religions were forcefully separated in 1868. The site’s earliest incarnation was most likely as a place for nature worship, and for most of their history the buildings have functioned as one combined religious institution. The temple is the first stop of the Saigoku Kannon Pilgrimage, which covers 33 Buddhist temples, and is undoubtedly a rewarding location for any visitor who cares to make the trip.

How to Get There: The main shrine is a 30-minute bus ride from Kii-Katsuura Station, which is a 90-minute train journey from Shirahama Airport (direct flights from Haneda Airport), or about three to four hours if you’re traveling from Nagoya, Osaka or Kyoto. For a slightly more arduous pilgrimage, you could opt for a 10-hour bus ride from Shinjuku, straight to the Katsuura Onsen area. kumanonachitaisha.or.jp The rugged cliffs at Tojinbo are one of only three similar kinds of rock formations existing in the world. The columnar rocks were originally formed around 13 million years ago from volcanic activity, further shaped by coastal erosion, making this a unique and dynamic part of the Fukui coastline stretching over one kilometer. Various local legends tell some macabre tales about ghosts haunting the area, but thankfully these days a retired police officer and volunteers are working together to prevent possible suicides and keep it a happier tourist destination. The awe-inspiring spot provides impressive views from the top of the cliffs, or if you want to get a closer look you can take a short pleasure boat trip around the rocks.

How to Get There: Traveling by train takes around four hours from Tokyo to Fukui Station, followed by another 45-minute journey to Mikuni Minato Station. From there, take a local bus arriving near the cliffs in about 10 minutes, or walk there in just over half an hour. Alternatively, you could make a 6.5-hour road trip from Tokyo. toujinbou-yuransen.jp 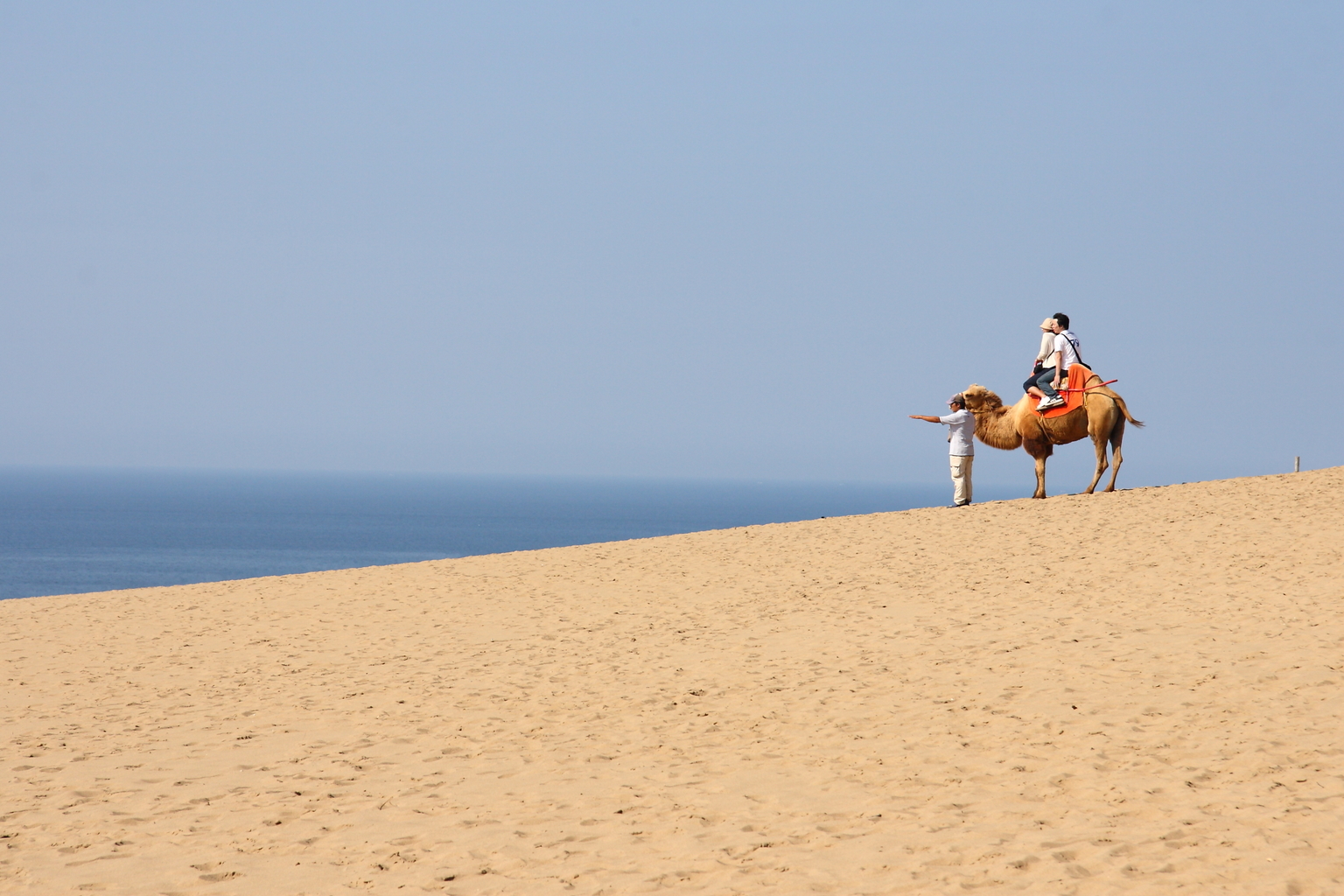 Spanning over 30 km², these spectacular sand dunes are the only example of this type of landscape in the country. Ash and sediment from the mountains were brought into the sea from the Sendai River where sea currents and winds bring it up the shore, forming the constantly reshaping and rippling dunes. Hills of sand can reach heights of up to 50m offering remarkable views of the surrounding sea and land. Ten years ago a Sand Museum was opened, heralding itself as Japan’s only open-air museum exhibiting “sand sculptures,” which due to their medium are always temporary. While the dunes have existed for over 100,000 years, recently their scale has noticeably decreased due to a various causes thought to include natural disasters as well as the high frequency of visitors to the area, so tread with caution.

How to Get There: Fly from Haneda Airport to Tottori Airport (75 minutes), then take a bus from the airport to Tottori Station (20 minutes). From the station, take a local bus bound for Tottori Sakyu and get off at the last stop (20 minutes). To get around the sand dunes you can enjoy camel riding or a tour in a horse-drawn carriage, and you can even try paragliding and sandboarding. tottori-tour.jp/en