Evolution and vision are perennial buzzwords at motor shows around the world. Two years ago at the Tokyo Motor Show, we saw some glimpses into the future of electric and hybrid powered vehicles, which are now rapidly becoming reality.

The dominant concept this time around, though, is the total motor experience, not only for the driver, but for passengers as well. There’s still plenty of eye-candy to be had at TMS, as you can see on these two pages, but along with a look ahead into future technology, we’re getting a prediction of what transportation will mean in the cities of the future, and what we’ll be doing as we go from A to B.

You could say that TMS 2015 is holding up a mirror to our current needs and behavior, and showing us our future selves: think of it as an automotive selfie set a decade in the future. Concepts like the Mercedes Vision look less like the inside of an automobile and more like a trendy new age lounge, where friends sit, chat, and check out the latest apps via hologram displays, as they make their social media-broadcasted way to their destinations. Driverless technology means that we may end up with large round tables inside our vehicles, where we can all gather and sit across from each other, and maybe even enjoy a meal. The question is: will anyone be able to look up from their digital devices to make eye contact? While you chew on that future prospect, here are a few of the vehicular visions of the future that grabbed our attention. Imagine a futuristic people carrier/minivan that drives itself, putting the real emphasis on passenger entertainment. The Mercedes Tokyo Vision Concept is all about the smooth, almost dream-like ride. In this ride you won’t even be looking at the roads or picturesque scenery on your travels—let alone playing a game of “I Spy.” You’ll be navigating your way around the central holographic entertainment system, with the kids hypnotized by the sci-fi colors and LED screens all around them. We don’t expect you’d hear many “are we there yets?” in this metallic luxury carriage. In its press release, Mercedes imagines that the car will be “a chill-out zone in the midst of megacity traffic mayhem.” Think of it like a party on the way to a party, a lounge environment with a VIP wraparound couch: who needs actual seats. Exclusive privacy is ensured by by “Alubeam” windows, which let light into the cabin while shielding the occupants from the outside world. For many PlayStation enthusiasts this car may look familiar: The Nissan Concept 2020 Vision GT was first revealed in 2014 and makes an appearance in the legendary racing game “Gran Turismo 6.” Co-developed with Polyphony Digital, the actual Concept 2020 Vision GT vehicle differs little from the digital racer and I dare to say, it is the most outrageous design Nissan has ever produced. The 2020 Vision GT began its life as challenge for Nissan designers who were given the chance to create a supercar of their dreams. And the result speaks for itself: it’s a supercar that looks so powerful, it could make an Italian “raging bull” cry and beg for mercy. According to Nissan, “This is a look at what a high performance supercar from Nissan may look like in the future”—and we are all looking forward to that. The red beast from Nissan dream garage is definitely a must see. When you hear Yamaha, you think motorcycles, pianos, and maybe the drums. Yamaha a truly versatile company, and they have branched out into new terrain with their new Sports Ride Concept. The Sports Ride looks like a “Mini-Me” version of the McLaren F1, with muscular, edgy curves and a central tail-light column. This may not come as a surprise since the Sports Ride concept is designed to work with the iStream manufacturing and design process pioneered by Gordon Murray, the man behind the legendary McLaren F1. The two-seater coupe has a stitched leather interior that looks like a case for an orchestral piece of hardware, and for good measure, they even propped a shiny gold trumpet (Yamaha, of course) on the seat! Yamaha promises the Sports Ride feels more like a motorcycle than like a car from behind the wheel. Bravo to one of the stars of the show! Anyone who has ever driven a Mazda RX will tell you what a blast it is. It’s ultra responsive, has that sporty edge and is, quite simply, hard to stop driving. Well, the boys from Hiroshima will have you fiending for more of that RX goodness with the RX-Vision. Word from Mazda is that it “represents a vision of the future that Mazda hopes to one day make into reality: a front-engine, rear-wheel drive sports car … powered by the next-generation SKYACTIV-R rotary engine.” Although the rotary engine was shelved in 2012, it looks as though research and development have continued since then, but the RX-Vision, or RX-9 as it could be rightly called, will have to battle through rehabilitation on three fronts—poor efficiency, poor emissions, and poor reliability—to make it back onto the playing field. Sounds like a tall order, and most concepts never make it to production, but we have high hopes for this svelte-looking machine. The Kikai reminds us exactly what a car is: a machine. “Kikai,” which means “machine” in Japanese, is the extrovert Toyota concept that is more than happy to show you all its parts. It flaunts most of its physical machinery on the outside of the chassis, so you can see how the suspension, wheels, gauges and all the other naughty parts work. It’s not the sexiest automobile at the show—in fact, it looks like the love child of a dune buggy and “Brum”—but by going against the grain, the Kikai reminds us of the fundamental technology that actually makes cars work. “While most vehicles conceal their inner workings beneath smooth sheet metal,” says Toyota in a press release, “this concept encourages us to appreciate the complex beauty of the mechanical aspects of cars. More broadly, it reminds us of the appeal of the physical and tactile in a digital age.” Maybe it really is what’s on the outside that counts…

Here are a few more of the vehicles that caught our eyes over at Tokyo Big Sight…which one is your favorite? And to drop by the Motor Show for yourself, here are some event details. 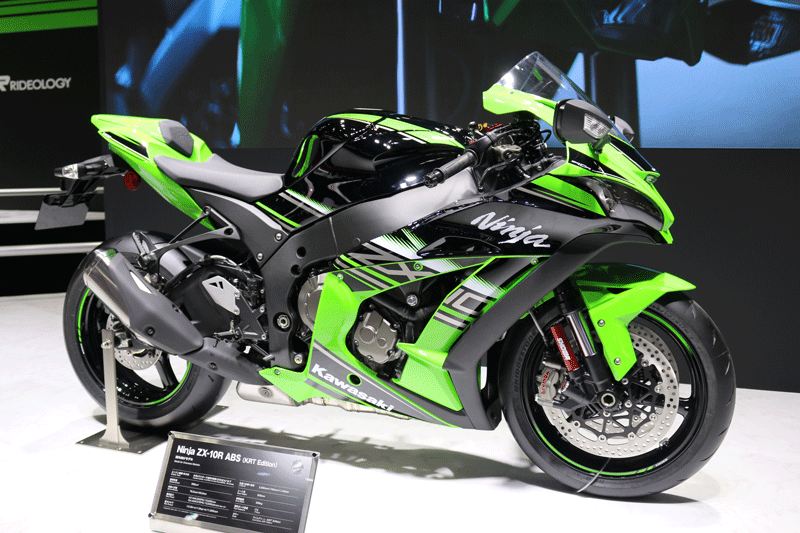