Summer in Japan is synonymous with traditional Japanese festivals, matsuri food stalls, fireworks and yukata under the stars. Slip on your geta and brave the crowds to experience these must-see events.

What is it?
By far the oldest and largest (not to mention busiest) fireworks display in Tokyo, the Sumida River Fireworks Festival is one of the most popular events in summer. The last Saturday of July is always synonymous with a night sky filled with dazzling shades, and packed crowds below trying to get the best spot to view them. Nearly a million spectators gather every year to see the colorful explosions, which come in an array of patterns, shapes and sizes.

A bit of history
Apparently, the tradition of the Sumidagawa fireworks festival can be traced back to 1732, when fireworks were launched as part of festivals for the dead.

What’s happening?
The best spots to view the fireworks are along Sumida River and from the various bridges across it, but unless you want to get squashed by the other Tokyoites who had the same idea, we recommend sticking around Asakusa, and even further away as the fireworks can be seen from numerous areas of the city, especially in tall buildings. The show starts at 19:05. The event will be canceled in case of rain. 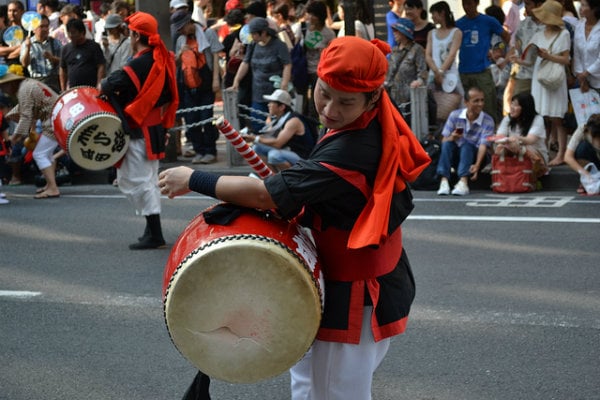 What is it?
This cheery festival has all kinds of flavors from Okinawa—with dancing, drumming, and of course, food. Eisa is a form of folk dance from the southern islands, and is usually performed by young men and women accompanied by song, fancy footwork and percussion, and even folk songs played on the sanshin—a three-stringed Okinawan instrument.

A bit of history
Eisa was traditionally performed around obon to honor ancestral spirits, but these days it’s just another excuse to celebrate.

What’s happening?
The parade will feature dancers swaying across the Shinjuku roads wearing eye-catching, bright costumes, and playing portable taiko drums. The matsuri is expecting over 20 dance troupes from all over the country (Okinawa and Tohoku included) to take part in this noisy, intoxicating celebration. Thousands are people should be in attendance as it’s one of the summer’s most popular events, so get there early to snag a prime spot to view the procession (and crowd-watch, which is always interesting in Shinjuku), which will continue on well after sunset.

What is it?
Just about the biggest party in Tokyo, Koenji’s annual street dance festival crams the streets to capacity for a weekend of raucous revelry.

A bit of history
The origins of Awaodori (400 years ago in Tokushima, Shikoku) are unclear, but some of the moves the older guys still pull hint at some kind of alcohol having been involved…

What’s happening?
Around 12,000 Awa dancers and countless more members of the public will descend upon the neighborhood to take in the parades that snake through nine different routes along the narrow, atmospheric streets. JR Koenji Station is particularly busy but you’re better off heading for Shin Koenji Station—head out of the subway entrance and right into the action, but get there early for the best views. Youngsters are in on the action too, though, and the sight of many of the troupes’ multigenerational casts might just inspire you to join in!

What is it?
The annual Asakusa Samba Carnival sees dancers wiggling their way through downtown Tokyo and shaking their feathers to the beat in what is possibly the city’s sexiest summer festival. Troupes of dancers will parade through the traditional quarters of Asakusa, going from Sensoji Temple to Tawaramachi Station. The whole event is modeled on the iconic Rio de Janeiro Carnival, and will hold a contest for the dance performers. Samba beats, churrasco grills and some Brazilian exuberance are sure to spice up the end of the summer.

A bit of history
The Asakusa Samba Carnival was first held back in 1981, in an effort to revitalize what was then a somewhat run-down area.

What’s happening?
The Asakusa Samba Carnival may not have much in common with other festivals you’ve seen throughout the summer, but it might be one of the liveliest. Expect plenty of tropical vibes, shaking hips, exposed stomachs, glitter and sequins, and hordes of Japanese men with zoom lenses…