Patrick Newell on TED in Tokyo and Businesses with Heart

Social entrepreneur Patrick Newell reveals how following your heart can lead to good business decisions, and why acting your age isn’t always the right answer.

One weekend in early October, while Typhoon Phanfone was making its approach from southern Japan, I found myself on a southbound Ito Line train, churning its way through heavy rain and rising winds, past bubble-era onsen resorts, looming hills, and expansive views of the Pacific. I hadn’t planned on riding a train towards a typhoon when I’d arranged to meet up with Patrick Newell in the Izu Peninsula beach town of Shimoda, where he was working on a new book. But given the pace and energy that this social entrepreneur brings to most situations, being in the vicinity of a storm seemed like a fitting background for finding out more about the California native. Newell has founded nine different organizations over the past two decades in Japan: this tally includes schools, a Tokyo chapter of the TED Conference, and a program that supports children’s homes around Japan.

Most recently, he has been working as a creative consultant for governments, businesses and schools, sharing the principles of “21st century skills,” an educational framework that is designed to prepare students for the work and social environments of a technologically advanced society. This has led to creating a nationwide curriculum for preschools and after-schools programs alongside Sumitomo Trading Company, authoring a 21st century skills book for parents with Shogakukan Publishing House, and organizing corporate workshops, among several other projects.

But he manages to enjoy himself at the same time. During the past six months alone, he’s made his way out to the TED Conference in Vancouver, the World Cup in Brazil, spent time in Mexico diving with whale sharks, delivered a talk about creating a sustainable economic system in Brisbane, and dropped in on the Burning Man festival in Nevada, USA.

Looking at what you’ve done over the past few years—or just this year alone—it’s hard not to wonder, “how is this guy managing to get involved with all of these different projects?”
For me, it’s really a question of finding the points of synergy among these various organizations and projects. One of the things that I notice is that all of the efforts that I’m involved with are connected to learning and sharing, which I see as two of our most basic human needs. I think it’s also important to be able to trust your intuition, and keep a youthful frame of mind. One of the concepts that I’ve been playing with recently is what I call toshi-han, or toshi-hanbun—keeping the mindset of someone half your age, and letting your inner child out. It can be more powerful than you think.

Starting with one of your first businesses in Japan, how did things get started with Tokyo International School?
We were already running English schools and tutoring programs for international school students, so we had a clear understanding about their curriculum. When our children started getting ready for preschool, we realized that launching our own school was the best way to ensure our children would receive the education that aligned with our beliefs. When I was digging into possible names for the school, I did some research into names that were already taken. I couldn’t believe that anybody had taken the name Tokyo International School. I remember saying to myself, “I’d really have to do a terrible job not to be successful with a name like this!” Of course, there were many challenges along the way, one of them being that I hadn’t studied education, but I think my lack of experience worked to my advantage, because it forced me to approach curriculum development with a fresh perspective. I actually think that’s one of the reasons we’ve become the success that we have.

Nearly 10 years after starting TIS, you founded Living Dreams, a program designed to help abused children and orphans living in children’s homes—kids who are living at the opposite end of the economic spectrum from TIS students. What was the inspiration behind this organization?
There are more than 30,000 students living in these environments, and society sets very low expectations for them. For example, even though we’re not living in a developing country, only 5% of these kids have access to the internet, and only 9% go to college. Growing up as the child of a single mother, I went through my share of hard times early in life. I knew that I wanted to create opportunities for kids from less privileged backgrounds like myself to have the chance to develop the skills that will help them achieve their dreams. Many people and organizations have gotten involved, and we just started a one-to-one laptop pilot program using cloud computing with 10 of these homes. I think this program could have a huge impact.

One of the things that I notice is that all of the efforts that I’m involved with are connected to learning and sharing, which I see as two of our most basic human needs.

The TEDx program has taken the original spark of the Conference and spread it around the world. How did you get involved with setting up its first international meeting, here in Tokyo?
I started going to the TED Conference in 2008, before the TEDx program got started. As you know, the motto behind the TED Conference is “Ideas worth Sharing,” and I thought that the chance to bring the TED format to Tokyo was an opportunity for Japan to have a chance to develop its creative confidence. This country innovates in many ways, but doesn’t do the best job of marketing those innovations.
Like TIS, it brought its own set of challenges and was a huge responsibility, but thrilling at the same time. I still laugh to myself when I think that I ended up writing a book about the power of TED, and the kinds of public speaking techniques, because when I was in high school and college, I avoided any classes that involved public speaking. I was horrified by it: I’m pretty sure that I was the top 10 most nervous speaker that you could ever ask to see.
As the head of TIS, speeches were what I had to do; I had no choice but to improve. It was part of the process. But when we started TEDxTokyo, I had to develop a different style of public speaking that required an open, flexible style of communication. Now I will emcee the whole day with almost no script at all.
Being closely involved in the organization of TEDxTokyo has also given me an excellent workshop for seeing creativity in action. For example, when I’m curating the TEDxTokyo speaker lineup of 36 speakers and entertainers, my intention is to make the order of that lineup as disconnected and illogical as possible. The people in the audience then have to start thinking about ways to connect all of these disparate elements and ideas, to find some chain of logic that unites them. That’s really where the a-ha moment can happen.

That sounds a lot like discovering a good business idea.
Definitely. Often the best ideas come when you are connecting the unconnected. I focus a lot on discovering ways to foster this within myself as well within the organizations I collaborate with. Of course, it’s one thing to find creative ways to make money by approaching things in a way that other people haven’t thought about before—it’s something else to see a business or an organization address some kind of social need with that same kind of creativity and business intelligence.
Right now many corporations are trying to figure out how to work more from the heart. Meanwhile, NPOs and NGOs are so generous, and their hearts are huge—they’re trying to make a difference in the lives of others, but they haven’t figured out the model of being financially sustainable. So there’s an interesting merging of two different worlds, both trying to find their balance. This is one of the reasons why social entrepreneurship is such a rapidly growing trend.

Any suggestions on how to get the current generation of Japanese corporate leaders to help usher in a new culture of innovation?
The Japanese corporate world is about building lifelong relationships or growing old together without taking any risk. By the time people reach positions where they have the power to make a real impact in their organizations, they’re hard-wired not to take risks and to some degree close their hearts. They protect themselves and their lifelong friends and block innovation. I call them jama oji or jama no oji-san. They’re the bottleneck to change and moving forward, but the sad part is most of them don’t realize what they’re doing. It would be interesting to see if they could let go of their fear, follow their hearts, let their inner child out to play, and try something new. Today’s world requires it. 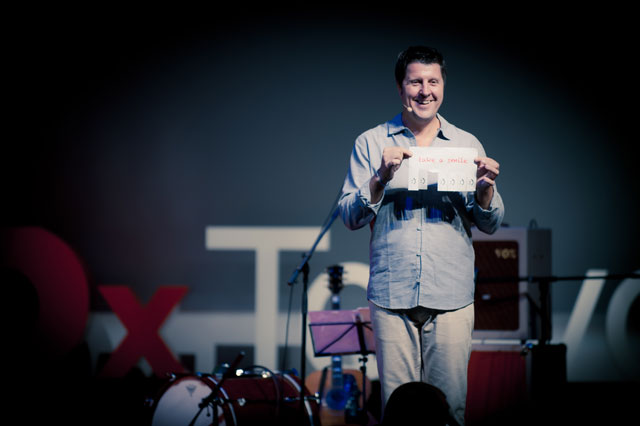