From the measures he’s pushed through to let us use our smartphones on Tokyo’s subway system, to his breaking down barriers – both bureaucratic and physical – our conversation with Tokyo Governor Naoki Inose at his office in Shinjuku last month was wide ranging.

It was impossible to ignore his intellect, especially when we touched on to the topic of Inose’s books (Inose calls himself ‘Writer/Governor of Tokyo’ on his Twitter profile – more of that later) but his passion for Tokyo and the continual idea that the city should evolve and shape the country was something that shone through. He talks straight and leads us through his ideas about the importance of change – and of being eccentric – with an assuring clarity.

After just a few months in the job, Inose certainly has confidence in his ability to govern, and knows what qualities he wants to bring to the job:

Naoki Inose over the years

2002: Dips his toes in political waters on a committee discussing possible privatization of quasi-governmental highway operators.

2007: Becomes vice-Governor of Tokyo under Shintaro Ishihara. He is the first person in 58 years without bureaucratic or political experience to take up the role.

2009: His 1993 book, The Century of Black Ships, is published in English. The book explores the historical relationship between Japan and the US and the historical context of their parallel empire building. 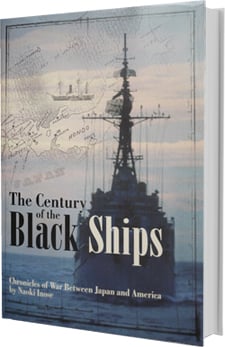 2012: Sweeps to the top job in Tokyo. His more than 4 million votes ensure a landslide victory – in part due to the lack of a high-profile candidate amongst his competition, who had to scrap together with little time, and backing from the LDP, which won its own easy victory in the national elections.

In his victory speech Inose promises to continue the bid for a 2020 Tokyo Olympic Games and hints that reforming TEPCO will be high on his list of things to do.

2013: On February 24, Inose fires the starting gun at the Tokyo Marathon – this time he watches from the officials’ enclosure after finishing himself in a time of 6h40:29 in 2012.

“Well, I need to play two roles, those of governor and vice governor. Actually, I have two vice governors who have worked up the ranks of the metropolitan bureaucracy, but if the vice governor is not a person who can create a new world as a novelist, new development cannot be expected. Familiarity with Japanese history and in particular the process of modernisation over the past 150 years is a very crucial point for our future.”

This understanding of the past is tied with a lot of what Inose says, but it is the future to which we are going and to get there, Inose thinks, Tokyo needs to reform:

“We have already reached an ultimate point – a certain ultimate world – from where we have no more to seek,” Inose suggests. We could easily, on the surface, be satisfied with the sophisticated city we live in, he says, “but if we don’t push on and have no growth, we will meet dead ends.”

Watchers of Ishihara, Inose’s predecessor who we spoke with before he resigned, keenly look for the similarities and differences between the two men, and views on immigration have in the past been a major talking point to say the least: “There are too few immigrants in Japan,” Inose says.

“I think that a society like Japan’s needs to have policies that accept foreign cultures. Currently we are accepting medical staff from Indonesia and the Philippines but the government is forcing them to pass incredibly hard exams – even native Japanese can’t pass such difficult tests! We should loosen regulations, but no such decisions are coming out of the bureaucracy in Kasumigaseki.”

There is a level of frustration with bureaucracy in national government that perhaps comes with the job. One thing that Ishihara said he aimed to do was ‘change Japan from Tokyo,’ and Inose agrees:

“I follow that idea. I would like to make changes from Tokyo to the whole nation. Matters like immigration are really something for Kasumigaseki but as you know, the USA is the United ‘States’ of America; Japan is the United ‘Ministries’ of Japan. Tokyo is the one and only ‘state’ in Japan. Kasumigaseki consists of 12 ministries, and they cannot change themselves by themselves. So Tokyo creates a model first, then shows the model to Kasumigaseki, to change the whole nation.”

“The private sectors should push forward the employment of foreigners,” Inose says. “Uniqlo, for instance, is positively employing capable non-Japanese staff. That is their idea. Perhaps employing non-Japanese as a national policy does not make sense, but each company should hire foreigners so as to grow in the future. I also think we should accept more highly skilled immigrants such as IT experts from India.”

Improved communication seems a key point. “After I became governor, I obliged all the departments of the metropolitan government to start using Twitter [Inose himself met Dick Costolo, CEO of Twitter, in March to “discuss the important role of the service in case of disaster”] and I am positively dispatching information.”

“Olympic related information is already dispatched in English but I think we need to increase that. The Tokyo Metropolitan Government should become an extraordinary administrative institution, Inose says: “We need to become like a private sector company.”

Happy to have met Mr.Costolo in the time of cherry blossoms.We discussed about the important role of Twitter in case of disaster.@dickc

Though he has plans to ensure more and more Japanese companies positively hire foreigners, Inose also sees barriers rooted in employment culture that will need to be moved. Changing position within a company or organization every two years promotes ‘generalists’ rather than ‘specialists’ and has long been a policy in Japan.

“But if we keep this system,” Inose says, “there is no space for foreign workers. We have to change the very basics of the employment system. I think companies like Softbank and Uniqlo are not following the old traditional system and I hope those new companies with new systems will grow in the future. Actually, we (the metropolitan government) may also employ foreign people in the future, right? But as long as we keep the status quo, there is no future. We have to bring up more experts and give them more priorities.”

Another way Japan can grow and have foreign influence at the heart of that is with the new Special Zone for Asian Headquarters, which will mean reduced corporate tax for companies setting up in this specific district of Tokyo.

The idea is that here in Tokyo we have what a paper on the plan calls ‘key enabling factors’ for successful business – skilled human resources, a wealth of information, superior technologies and solutions, a robust financial sector, a vibrant market and one of the best infrastructures in the world – and that we should be making better use of them.

Tokyo could, if the plan works, be transformed into the preferred and core hub of business headquarters and R&D centres in the Asian region. To compete with other cities – Inose names Seoul and Singapore – the Tokyo government will collaborate with the national government on what the document we were given calls “bold deregulation and a generous package of fiscal and financial assistance to foreign companies newly headquartered in this zone of central Tokyo.” Inose highlights a reduction in corporate tax from 40% to 28.9%.

The importance of being eccentric

Inose has said before than he was a supporter of Junichiro Koizumi and of course Shintaro Ishihara and we ask him what their qualities were: “Only eccentric people ask me to work for them,” Inose says. “The ratio of eccentric people in Japan is far too low, people just imitate the genius next to them. Japanese often say ‘group thinking’ is important but that means individuals never take any responsibility.”

But with all this talk of change, Inose wouldn’t want to position himself too close to his predecessor: “I am quite different from Ishihara-san because I ran 42.195km, a full marathon, on the February 26 last year,” Inose jokes. “He just watched the runners at the starting point, but I actually ran!” He didn’t this year, but does show us an app on his smartphone and tells us, “the day before yesterday I ran 4km. I usually run 80km per month and my goal is to run 1,000km annually – people should do that more, especially as we hope to get the Olympics in 2020. You know, Ishihara-san was not familiar with smartphones; he was actually using the cell phone upside down,” Inose laughs. “It’s not his fault, of course, it was just a matter of era and generation.” Perhaps we can blame Inose’s ‘generation’ for the chain-smoking that runs through our interview.

“I am quite different from Ishihara-san because I ran 42.195km, a full marathon, on February 26 last year, he just watched the runners at the starting point, but I actually ran!”

“I am a generation younger than Ishihara-san so my ideas too are different in some ways. I would like to proceed with some more specific innovations for the city. For example, there are currently two underground companies (Tokyo Metro and Toei) and I would like to unite them as soon as possible.” Inose has achieved part of his aim, with the recent removal of what he called the “fools wall” separating the two lines at Kudanshita station. “I’d also like to restructure TEPCO, which would mean the liberation of electricity. I am not yet sure how I can do that but I am talking with Kasumigaseki about measures we can take.”

The future for Tokyo?

Back — or indeed forward — to the Olympics, the man who now leads the city had some interesting ideas on how to persuade the world Tokyo is ready, and they come from some idiosyncratic places. He tells us how when in London recently he framed his rallying call for Tokyo’s bid in literary references – mentioning how Barthes saw Japan in the 1960s.

“I wrote about Barthes and his view of Tokyo in my book “Mikado No Shozo” and I said in London that Japan has a modern business side and strong tradition and the relationship between these two things can lead us to our innovation. People seemed to understand what that meant [that Japan’s unique culture can give birth to innovation] – I think it is important to use words as a seasoned writer would, to express the ideas clearly.”

Whether or not you go on Naoki Inose’s literary or philosophical journey, on this evidence he strikes us as a politician who could get elected to govern any major western city, something few in Japanese politics are progressive or liberally minded enough to even consider.