National Stadium gets a makeover

Japan’s National Stadium is getting a new design – and will potentially form the centre of a Tokyo Olympic Games in 2020.

Owners of the Kasumigaoka National Stadium, near Sendagaya, held a competition for architects from around the world and last night announced the winning design, which you can see in the pictures above and below (Photos by Japan Sport Council.) What do you think?

The winning architect is British based Zaha Hadid Architects, led by Zaha Hadid. Hadid was the first woman to be awarded the Pritzker Architecture Prize, in 2004 (Bridge Pavilion in Zaragoza, Spain) but is perhaps more famous recently for designing the Aquatics Centre at the London Olympics.

Renovations to the Stadium are to be completed in March 2019, its owners announced, before the opening of the 2019 Rugby World Cup in Tokyo. The Japan Sport Council, its owners, has set the construction budget at 130 billion yen ($1.62 billion).

To put that figure into perspective, London’s Olympic Stadium cost a reported £486 million (around $700 million) and renovations in Rio to make the Maracana ready for the 2014 World Cup and 2016 Olympic Games are estimated at $425m.

Land prices and other factors are at play, of course, and there is no doubt Tokyo needs a world-class stadium if it is to compete into the future. Public reaction has so far been mixed, with the usual budgetary concerns against those excited by sport but it is early days.

The news is sure to be buried by the latest political goings on in Tokyo but we feel that this is potentially something to get excited about.

Tsunekazu Takeda, IOC member and President of both the Japanese Olympic Committee (JOC) and Tokyo 2020, said in a release to mark the anouncement: “Japan’s newly refurbished stadium will be the best of the best. It will have one of the largest spectator capacities in the world, and will also offer the finest hospitality. A state-of-the-art stadium like Kasumigaoka (which also has a retractable roof) is another indication that Tokyo is ready to deliver a dynamic celebration that reinforces and renews the Olympic Values for a new generation.”

We will have to wait until the 7th of September 2013 to know whether the Olympics will indeed be coming to Tokyo (or whether Madrid or Istanbul win the bid) so there will be plenty of fingernail biting over the next few months, but Japan’s Bid Committee will hope the new arena can give them a boost. 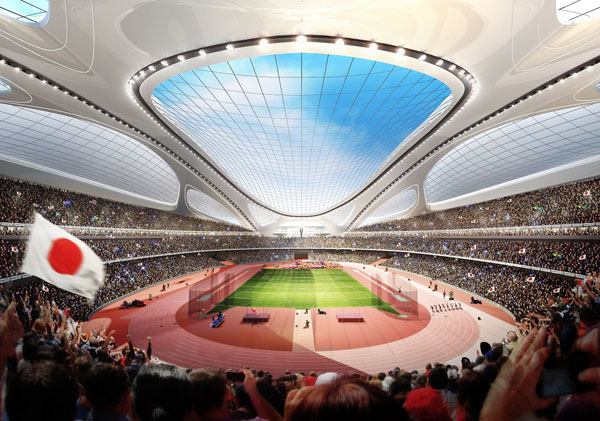