A colonial feast in 1621 celebrating a bountiful harvest seems, on the surface, to have little relevance to life in Tokyo. However, the traditions of the annual American Thanksgiving celebration are alive and thriving in this modern metropolis, and is one of many festivities celebrated by the foreign community. Occasions from Valentines Day to Christmas are hosted by restaurants and bars all over Tokyo. But what place does Japanese culture have in these festivities? “Thanksgiving at Fujimamas is a home-style celebration,” says Lauren Shannon, director at the restaurant. “Traditional food is served from shared plates on the tables, the way you would serve it if you were hosting at home.”

Breaking with tradition, although perhaps closer to the original Pilgrim celebration which lasted three nights, the  Thanksgiving celebration at the Pink Cow in Shibuya was held over two nights on Nov. 25 and 26. Thanksgiving is the biggest annual celebration held at the Pink Cow rivalling even Christmas, the holiday for which many foreigners living in Tokyo return to their home countries. The most popular aspect of the celebration, according to owner Traci Consoli, is the comfortable atmosphere. “You don’t feel like you’re so far away from home,” she says.

This atmosphere is maintained in all of the festivities hosted by the Pink Cow. As Traci says, “The Pink Cow is an extension of my living room. We celebrate the holidays I always celebrate.” These holidays include Christmas, New Years Eve, Valentines Day, American Independence Day and Halloween. While the events are usually celebrated in a traditional way, turkey for Thanksgiving, a tree and yuletide decorations for Christmas, Traci believes that the non-traditional element of each event is the people who attend. With the Pink Cow’s creative clientele, she says, “you always have interesting conversations!” 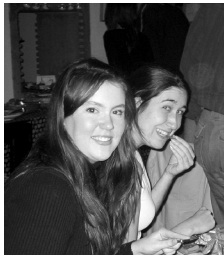 Guests at Fujimamas enjoyed celebrating the Thanksgiving custom in a casual, friendly environment without the stress of preparing the meal themselves. Pink Cow customers were thrilled with the traditional turkey ceremoniously carved by the chef and the variety of pies — pumpkin, pecan and cherry!

The festivities celebrated at Fujimamas, such as Christmas, New Year’s Eve and Easter, are all Western holidays. Lauren believes the fusion of food, the international staff and the flexibility of the restaurant space appeals to Japanese people who are able to explore Western culture in a trendy, fun environment, “We take what we like to remember from back home and what we like from Tokyo.” This approach is proving to be a success for Fujimamas which boasts a global crowd – half foreigner, half Japanese.

While more and more Japanese people attend these celebrations and participate in the international environment cultivated by venues such as the Pink Cow and Fujimamas, there is a distinct lack of acknowledgement of the traditional festivities of the Japanese culture. Japan has no shortage of festivals including its own version of Thanksgiving called kinro kansha no hi, or Labour Day, on Nov. 23. The rich culture of the adopted home of people from around the world is largely overlooked by many so-called international restaurants in Tokyo. This may be indicative of a lack of interest in the culture by the foreign community. Then again, restaurants simply may not be an appropriate venue to mark festivities which are traditionally celebrated with family at their homes or at shrines.

Things can change. Both the Pink Cow and Fujimamas are happy to hear ideas for other events to be hosted at the venue, be they public or private functions. It would be great to see foreigners living in Tokyo be able to explore Japanese cultures in environments such as these.

For information on upcoming events at the Pink Cow, check out their website: www.thepinkcow.com