“Now let me try to get this straight,” demanded Binky like a mean cross-examiner in a murder one trial. “Does she mean she’s ‘a broad,’ Charlie Jake? Or just that she’s ‘abroad?’” Her light Iowa twang plucked out damn near a full syllable for each letter of b-r-o-a-d. At least she knew something about Caroline when I told her the Weekender shall rise again.

Damned if I didn’t think I’d be able to retire from this restaurant writing business. Can’t say why but Caroline and the crew wanted this old coot. But I’ll level with you. I was happier than a flea at a dog show to be called back here.

The timing was good. Around that time, my old pals Fred Flintstein and Bernie Reubel from Dallas headquarters had been posted to Tokyo, so I’d have someone to help me out with all the chow what you gotta order when you’re sizing up a place. We’d worked together on a project I can’t tell you nothing about, and we had a lot of catching up to do. I couldn’t expense dinner on the company dime, so it had to be on the cheap side. And knowing Fred and Bernie, the food had to be spicy.

“Why don’t we check out this Indian place near Tokyo Station? Found it last week, on my way back from this little beer joint,” I offered. “Called Dhaba India, and they got all the spicy heat you want.”

“Yeah, let’s yabba Dhaba do it,” Bernie chimed in. Couple a jokers, these guys. I heard they used to do a comedy act together in college. Got pretty famous as “the paleo-comedians,” I don’t know why.

That Saturday night we went into Dhaba India and it was way more than I’d expected. For starters, it didn’t look like your average Indian restaurant in Tokyo. Instead of the cathouse décor in reds and golds, the place was blue inside, soft and cool. Except for the three of us, and a Japanese couple at a small table in a dark corner, all the other customers were Indian folks, families of them. Well, it sure looked like we’d come to the right place for Indian food. 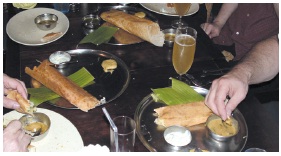 I’d heard it was mainly southern Indian food, so we made sure to have one of the specialties of the Deep South — dosa, kinda like a big huge tortilla but lighter and crispier, stuffed with curried vegetables. They landed and we dug in.

The guys started to talk about the flight over from the Big D. Fred said General Strategics ponied up for first class, and across the aisle were some arrogant ranchers what got a few drinks into themselves and started bragging about their places. One boasted his Bar T ranch got 20,000 head on eight square miles, and the other said his Triple S ranch got 28,000 on 14. One guy then turns to Fred and Bernie and says “How about you boys, how many head are you running?”

“I got no cattle, and only about 80 acres,” said Bernie modestly. The guy kinda sneered and went on to ask Bernie the name of his ranch.

“Well…” Bernie drawled out, “the place don’t got no name. Most folks just call it downtown Dallas.” Sure shut them big-hat sumbitches up the rest of the flight.

I asked them why they chose to live near Yoyogi Koen. “Well… we wanted places near each other, and close to the JCC,” explained Fred, “so the agency showed us a place in Azabu Juban.”

“Somehow the place gave us the creeps,” chuckled Bernie. “We weren’t so sure our kind of people were welcome in the neighborhood.”

“Yeah, must have been the name,” admitted Fred, with a serious grin.

“But a name like Koen made us feel at home, ” chortled Bernie, raising his forefinger. 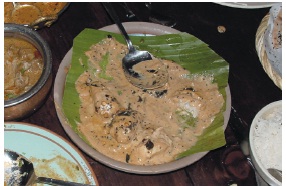 The curry landed chased down by a few plates of that naan bread. Glad I ordered the okra curry; it was good but coulda been a bit hotter. The lamb curry was more our style, while the chicken curry what liked to blow your eyeballs out it was so damn hot. No problemo, we had beers and beers of beers. Then some.

Dhaba India’s different from most other Indian joints in Tokyo because each curry tastes pretty different from the next, and the spices seem real fresh and interesting. I’m sure their chef could teach us Texans a thing or two about how to make a good bowl of red. Enough good food and beer to make you burst cost us about ¥5,000 a head. Charlie Jake sez two thumbs up.