Roppongi, light of my life, fire of my loins. My sin, my soul. Ro-pon-gi: The tip of the tongue taking a trip of three steps down the palate to tap, at three, on the teeth. Ro. Pon. Gi.

Well, not quite, but the name sure has a ring to it. So much easier to say than “Shiodome” or “Marunouchi,” and so much more memorable. What had you heard of before you arrived in Tokyo? Roppongi. What will you tell people about in years to come? Roppongi.

In a 17-year-long stroke of genius, Mr. “Minato” Mori has hijacked the name and created a new brand with it. Now you almost expect to hear “Hills” when someone says the word. The original “six trees” on the hills of Roppongi have long gone. It is the six circles of that logo you see planted all over these hills.

The corner of Roppongi that Mori has taken over, 6-chome, supplies the other six. Putting 6 and 6 together, they came up with 66, the nickname for the Roppongi 6-Chome Redevelopment Project you see everywhere as you walk through.

And what about those numbers on the corner? Ever thor­ough in our research, we went down and sat in front of the numbers, looking for a pattern, a meaning. Two hours of puzzling it out later, we came to the conclusion they were random. A quick call to the folks at Mori Building confirmed our findings, and we learned it is a work of art by Tatsuo Miyajima.

But our theme was born, and we decided numbers were a pretty good way of filling in some of the blanks you might have, wandering around the vast complex.

“We didn’t expect this high level of visitors. We’re asking ourselves how it can be so, and it’s because people can find all the things they want here,” says Toru Nagamori, Mori Building spokesman.

They are coming for the shops, more than 200 of them. Perhaps this explains why 60 percent of visitors are women.

More than 1,000 businesses applied for a shop space, and this was whittled down to the ones you find; the proviso being shops and restaurants had to be “special.” The lucky 200 are expected to pake $333 million in annual sales. Looking around the shops, the most expensive item we could find was silver necklace at Mikimoto for ¥18 million.

It’s not just the shops in Roppongi Hills reaping the benefits. Major retail areas close to the complex, such as Azabu Juban, have doubled their revenues.

“We are getting a very good response from the community and we are proud of that,” says Nagamori. “We are prosper­ing together.”

The visitors are also flock­ing to see the view from the 52nd floor Tokyo city view observation deck. More than 460,000 people have spent ¥1,500 each to admire the ‘Tokyo skyline from 250 meters above sea level, and the 4 a.m. weekend opening time is popular with Roppongi night owls.

Culture vultures also have many reasons to fly by. The Academy Hills library has more than 300 members, with 400 students at the school. More than 22,000 people have visited events at Academy Hills so far. Coming soon is the Mori Arts Center, which opens Oct. 18, with the entrance fee a reason­able ¥1,500.

Movie buffs can choose from nine screens that go all night Thursday to Saturday at Virgin Cinema.

All these visitors need infor­mation. The ¥400 handbook on Roppongi Hills has just sold out its first print run of 50,000 and is now on its second print run. The Roppongi Hills website www.roppongihills.com is still receiv­ing 300,000 page views a day, and Roppongi Hills community passport/town card and mem­bership stands at 150,000.

On the office space side, 85 percent has been leased, albeit with rumored reduced rent sweeteners for some companies. There are 4,500 unobstructed square meters on each floor. And the offices are filling up with the right companies: Goldman Sachs, Lehman Brothers and Yahoo!, to name but three.

Not all of the people are visitors or workers. Eighty per­cent of residences had been pre-leased. This figure is twice as high as Mori Building’s prelimi­nary expectations. No matter that rental units start at ¥600,000 per month, and the most expen­sive pads cost ¥4,000,000 per month. The majority of apartments have been snapped up already.

It’s still early days, but the reported $800 million from Mori Building’s own coffers spent on the complex appears to be money well spent. Hotels across Asia are reel­ing from SARS and ter­rorism, and companies everywhere are cutting back on corporate travel and entertain­ment. Hardly the time to be opening a luxury hotel, you may think. But the Grand Hyatt peo­ple were confident they could fill 65 percent of their rooms on opening, with special rates of ¥30,000 (weekdays) and ¥33,000 (weekends) for a “Grand Room.” They didn’t count on doing 85 percent. 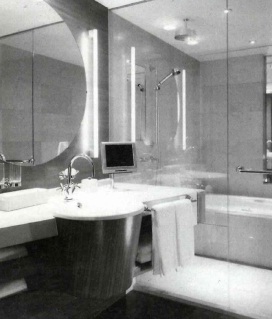 General Manager Xavier Destribats happily complained about being understaffed in the “crazy” first month. And the out­going Frenchman actually thanks SARS for filling his rooms with Japanese guests, spending their tourist yen domestically this summer. Fifty-six days after opening, 17,000 rooms had been used, and 150,000 people had eaten in one of the eight restau­rants and bars.

Grand room rates will go up to ¥46,000 on Sept. 16 (executive rooms to ¥100,000), so get in before then if you want to sample luxury at a great price. You’ll be in one of 390 sleek, contemporary rooms. Your mattress will have an extra six cm. padding, and your Egyptian cotton linen sheets will have a 300-thread count. Kick back and watch the 30-inch flat screen TV and, if you get bored while washing your hands, there’s a 13-inch TV in the bathroom.

Get online in your room at 100 megabytes per second. Have a bath – the taps are similarly high speed, filling the beige lime­stone tubs in five minutes.

If you fancy a bit more pam­pering, hit the Nagomi Spa on the fifth floor, covering 1,300 square meters. Guests can use it free, and we recommend you try it this way, because to join as a private member you will need to come up with ¥3,360,000.

After paying that, you may need a stiff drink. The Maduro bar has about 50 rare whiskeys and ports, and nightly live music for a ¥1,500 cover charge. For free entertainment, stand outside the Juniper restaurant, where there are four 42-inch flat screens showing the lively goings-on in the kitchen.

Oh yes, I almost forgot the Presidential suite, occupying the entire 1,356 square feet of the top floor. The long list of attrac­tions includes an indoor Japanese Zen garden and out­door 14-meter pool, and four TVs with a combined 114 inch­es. Not bad, but it will set you back a cool ¥470,000 a night.

Public Relations Manager Mark Kobayashi keeps his cards close to his chest when asked about who has stayed there. But around about the time of the “Matrix Reloaded” premiere, and then again at the time when Posh and Becks were in town, the 21st floor lights were on.

“Happiness is finding two olives in your martini when you’re hungry.”

Never a truer word said, Mr. Carson. Parking up at the Roppongi Hills Club main bar (the fifty-one club), with my stomach doing cartwheels after a day of work, obento, coffee and more work, the bonus olive (always two here) is the only sus­tenance keeping me from passing out and causing a scene.

Dinner couldn’t come soon enough. It is to be in The Undercurrent, one of the eight restaurants in the Club. Walking to my seat, I am told the bar adja­cent to the restaurant serves 21 types of martinis. (Is 42 olives an acceptable dinner alternative? I wonder.)

Considering the inevitable fall-out that would occur from my working through the martinis, I decide to leave this for another time (and for some­where less salubrious).

Thus, I sit down for dinner and start to crunch my way through more of the Club numbers, fueled by the excellent seafood and white wines ferried to the table by the waitress so beautiful that, to paraphrase Woody Allen, I can hardly keep my eyes on the numbers.

She is one of 280 people working at the Club, with train­ing of the staff starting two years before the opening of the Club.

Currently they are at the beck-and-call of more than 1,900 members. When the Club opened on Apr. 25, pre-opening membership stood at 680. The Club has far exceeded its initial targets.

“We are very happy with the growth in the membership thus far,” says Kiyoshi Kamata, General Manager at the Club.

Of the members who have joined so far, 20 percent are for­eign. The aim is to have a foreign membership consisting of 35 percent or more, and Kamata can see this happening.

“Our vision was to provide a place where people from all walks of life can meet and mingle. I think we’ve accomplished that, and we look forward to continued diversity at the club,” he says.

There’s also a diverse age range, according to Kamata. “Our members have used the club for business entertainment, private use and, with their fami­lies and in that time period, I’ve regularly witnessed three gener­ations of people, all at the same table,” he says. “It is this variety that sets us apart.”

If you want variety, the club has got it in spades. There is the glass wine cabinet that holds more than 1,500 bottles, the most expensive being the Montrachet (DRC) 1999 at ¥240,000 a bottle.

In the sake bar, there are 200 types of sake to choose from, and where I’m sitting now, post dinner in The Undercurrent bar and lounge, there is the afore­mentioned array of martinis, always served with two olives. Does a martini qualify as dessert? I wonder.