Japanofile Jack Seward tells what they all mean…

With the beginning of a new year, it’s a certainty that a large number of new arrivals to Japan are beginning the endless task of coping with what we’ve come to call Things Japanese. One thing is sure for new­comers: You will have a communications prob­lem. Just how serious this problem will be de­pends on where you go and how long you stay and whether or not you travel in the company of a Japanese-speaking friend. But no matter what you do, you will have this problem at least to some extent.

What should be done? Give up your hopes to enjoy your stay in Japan? No, that would be going too far, since Japan is a marvelous ex­perience.

With about seven percent of the Japanese population knowing enough English to lend a linguistic hand to a forlorn foreigner, you will sooner or later find one of them to help you solve your problem, although you may meet several blank looks before you reach that one person in 14 you are seeking.

What can you do in the beginning? Use some gestures.

Fine, you say, and you begin reviewing those gestures we have all used since childhood: thumbs up, thumbs down, V for victory, middle finger in the air, clenched fist, A-O.K. sign, the finger-pinched nostrils and so forth.

But wait. Are these gestures universal? Or, more to the point, are they used by the Japanese?

Unfortunately, no. Japanese gestures are a world of their own, just as their language is. They seldom coincide in meaning with the gestures of any other country. You must resign yourself, therefore, to learning entirely new gestures, but be not dismayed. It’s a lot easier to learn the gesture than it is to pronounce and remember the phrase you would have to use to convey the meaning of the gesture.

There is another reason why gestures, which are called temane or teburi in Japanese, are important in this country, but we will come to that in due course.

Form a circle with the thumb and index finger of your right hand. To us, this would mean everything is O.K., it’s all right; to a Japanese this finger-formed circle is a standard reference to money. 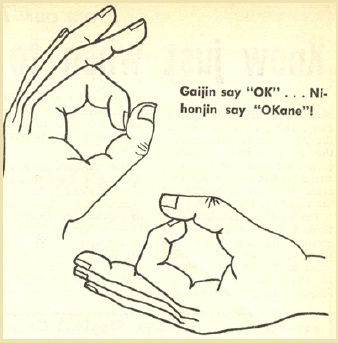 Now quickly memorize one more gesture. Wave your open hand back and forth in front of you, as if you were chasing a mosquito away from your nose. (Your hand can be right up against your nose or it can be held 10 or 12 inches away from your face.) This is the sign for No, none, not, negative, I haven’t any, I don’t want any. Suppose you are in a store where a sales clerk tries to sell you a pearl necklace that costs $500. You don’t have nearly that much money, but you can’t make this persistent clerk understand. Solve the problem by using the first gesture above and then the second. Make the sign for money and then the negative wave of the open hand. He will understand, believe me.

Clench your fist tightly. If you shake that clenched fist at an American, he would know you are angrily threatening him. To the Japanese, however, you are making the sign for someone who is stingy and close with his money. In fact, this should be easy to remember since we have the expression “tight-fisted” that means the same thing.

If an American husband takes his I wife out shopping in Japan and they’re shown the same $500 pearl necklace as above, he may protest in tones of outrage that the price is entirely too high and that he would never con­sider buying such a souvenir. This is the moment for the bereft wife to clench her right fist and point past it toward the husband with her left index finger. It may bring the house down—but mystify His Nibs.

When one of those many non-English-speaking Japanese finds that he somehow has to com­municate with you, his first compulsion may be to try to use gestures and, since these will in­evitably be Japanese gestures, it behooves you all the more to learn the basics.

Traditionally, the Japanese have regarded the stomach as the abode of the spirit or soul (not the region of the heart), but they have felt that (he nose is the entrance leading eventually to the lower abode. Accordingly, when referring to themselves, they will often point to their noses, whereas we point to our chests. There is the story of the foreigner who was studying Japanese in a language school and on the second day of classes he heard the teacher say “watakushi” and point to his nose.

Assuming that watakushi was the word for “nose,” he proceeded to use it that way: “My ‘watakushi’ itches” and “My ‘watakushi’ tells me dinner is ready,” thoroughly mystifying the teach­er and his Japanese friends.

Watakushi, of course, is the word for I, me, self.

On to more gestures. If you are talking about someone and crook your index finger at the same time, you are saying that the person has the unfortunate habit of taking objects not rightfully his. The little finger pointing straight up in the air originally meant a baby, but nowadays it is more commonly used to mean girlfriend, mistress or wife. The right thumb held straight up in a similar manner means boyfriend, father, husband or master. The first two fingers of the hand tapped lightly against the lips is a reference to kissing.

Now this next gesture is very useful, but is one you must be careful about. We often signal goodbye by extending our right arm straight to the front and waving the fingers up and down, but the Japanese have a similar gesture which is used when they want to call someone to their side. The only difference is that in the Japanese gesture the fingers are moved while pointing at a slight downward angle and not held straight out. 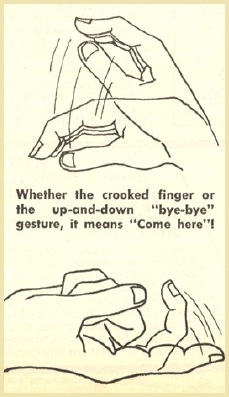 Having just finished lunch one day in the Fujiya Hotel in Miyanoshita, I strolled outside in the fine mountain air in time to see a Japanese girl guide and her flock of 50 or so elderly Amer­ican tourists whom she had brought to that resort by bus. Evidently it was time to board the bus and press on to greater wonders, so the young Japanese lady took up a position in the middle of the parking space in front of the hotel and blew that whistle all true guides carry. This got the attention of the 50 scattered tourists, but they made no move to gather around her so she put her hand straight out in front of her and made the fluttering motion of the fingers just described.

The 50 Americans, however, thought that she was waving goodbye, that she was telling them to go on and wander about in the streets and shops of Miyanoshita for a while longer. Taking her at the ap­parent word, they started off in all directions, leaving the girl guide putting a hand to her head with her fingers out­stretched.

Had she been an American, she might have wrung her hands to signal despair or stood akimbo with wide-planted feet to express her frustration or blown a lock of her hair out of her eyes to let off steam, but she was Japanese and so she put her right hand to her hair as if she were about to scratch her head — to express her consternation at having made the wrong gesture.

When a Japanese rapidly crosses his two index fingers, he is telling you there is bad blood between the two people being discussed. The thumb rubbed against the side of the nose means a card game called hana, the name deriving from the pictures of flowers on the backs of the playing cards. Hana is the word for nose as well as for flower.

Some Westerners still use the old gesture (from the Middle Ages) of sticking the two fore­fingers out from the forehead, like horns, to suggest that someone is messing around with another man’s wife.

The expression was “to put horns on a husband.” This would be a reasonable cause for jealousy, so it is a con­venient mnemonic to help us remember that the same gesture in Japan is a sign for jealousy. The white cloth headdress worn by Japanese brides is called a tsuno-kakushi or “horn-hider,” and the bride wears it to signify she will hide her horns or not be jealous of her husband after marriage, no mailer how mightily he philanders or tries to put horns on other husbands.

If you visit a Ginza bar and propose to one of the charming hostesses there that the two of you spend the next weekend in Alarm or Nikko, she may make the sign of the horns with her index fingers, look at you quiz­zically, and ask “Okusan wa?” (or “How about your wife?”)

Moving your thumb back and forth is a reference to the up­right pinball game of pachinko, which has been tremendously popular in Japan during the post-war period. In this game, the thumb is used in that man­ner to operate the lever of the pinball machine.

Cupping the left hand just below the level of the mouth with the right hand going through the motions of using chopsticks is a readily under­stood reference to food or to eating.

One reason, referred to earlier, that gestures are especially important in Japan is that they reflect the pervading Japanese fondness for communication without words, which have never been highly valued in Japan, Kato Shuichi has said, “A strong distrust develops be­tween Japanese if they try to express everything through words” and Nitobe Inazo once wrote, “To give in so many words one’s deepest thoughts and feelings is taken by us as an unmistakable sign that they are neither profound nor very sincere.”

In place of words, the Japan­ese rely on ishin denshin, a kind of mental telepathy that seems to be possible in such a homogeneous race isolated from the rest of the world for many centuries—and on ges­tures. Hence, their importance.

Although it utilizes the torso in lieu of the hands, the how is nonetheless a gesture—and a very important one at that.

(The young women who bow the customers onto escalators and into elevators in depart­ment stores in Japan are said to bow as many as two or three thousand times every working day.) Simply put, the bow indi­cates respect or appreciation. So often do the Japanese bow that it has become a reflex motion for many of them, the newcomer can occasionally see a Japanese bow when he is speaking on the telephone. The question for the fresh arrival to Japan is, of course, when to bow — or if to bow at all. The best advice is probably to bow your head slightly when bowed to, but for the most part stick to your own code of man­ners, if your visit is to be one of short duration.

Pointing the forefinger at one’s ear or temple and making a circular motion with it has two meanings, depending on the direction of the finger move­ment. If the forefinger moves counter-clockwise, the gesture refers to a perverse, eccentric or mentally unstable person. Moving the finger in the op­posite direction, or clockwise, equals vanity.

If one holds his stiff right hand in front of his face with the palm facing to the left, he is asking indulgence for cross­ing the path of another or for passing between two persons. Accompanied with a slight bow of the head, this is a very frequently used gesture and should stand you in good stead in crowded Japan.