This is the second and final part of our news review looking back at some of the stories that made headlines this year in Japan. Focusing on the months from July through to December, we begin with an incident that stunned the nation. As the news started filtering through just after 11:30am on July 8, it seemed almost too shocking to be true. Shinzo Abe, Japan’s longest serving prime minister, had been shot while delivering a campaign speech in Nara Prefecture. Showing no vital signs, his death was confirmed a few hours later. He was 67. The perpetrator, Tetsuya Yamagami, a former member of the Maritime Self-Defense Force, used a homemade gun. After missing with his first shot, he then hit the ex-PM in the neck and chest area. The suspect told the police he targeted Abe because of his association to the Unification Church, a controversial religious organization founded by Sun Myung Moon in Seoul in 1954.

Yamagami’s mother reportedly donated huge amounts to the church, leaving the family’s finances in ruins. Due to Covid-19 restrictions, he was unable to fly to South Korea to kill his original target, the organization’s leader Dr. Hak Ja Han Moon, so focused on Abe instead. He believed the former PM’s grandfather, Nobusuke Kishi, who also served as prime minister, was instrumental in bringing the group to Japan. Despite the Unification Church controversy, the LDP retained a comfortable majority in the Upper House election. Also in July, Japan ranked 116th in gender gap report while in sport, two-time Olympic champion Yuzuru Hanyu announced his retirement from competitive figure skating. At the Athletics World Championships, Japan won four medals, including a gold for 20-kilometer walker Toshikazu Yamanishi. The fallout from Abe’s assassination continued in August. Tomohiro Tanaka, leader of the Unification Church in Japan, revealed that followers of the religion had been abused and received death threats since the shooting. The approval rating for Prime Minister Fumio Kishida’s cabinet slumped, mainly due to the LDP’s links to the church. As a result, the PM decided on a reshuffle a month earlier than expected. Several high-profile members connected to the religious organization were dismissed, including Abe’s younger brother Nobuo Kishi. According to a survey by Kyodo News, at least 106 lawmakers had ties to the group with LDP members accounting for around 80 percent of the total.

Another major issue for the government concerned national security. Japan’s used to North Korea launching projectiles into its waters, but not China. At the beginning of August, Beijing fired five ballistic missiles into the Japanese Exclusive Economic Zone for the first time. In Myanmar, Japanese documentary filmmaker Toru Kubota was arrested for filming demonstrators at a flash protest. There was sad news in the fashion industry as trailblazing designers Hanae Mori and Issey Miyake both passed away.  Former Tokyo Olympic organizing committee executive Haruyuki Takahashi was arrested for allegedly receiving bribes from suit retailer Aoki (as well as Kadokawa, Daiko Advertising and ADK Holdings). In sport, Shohei Ohtani became the first MLB player to reach double digits in wins as a pitcher and home runs as a batter since Babe Ruth in 1918. 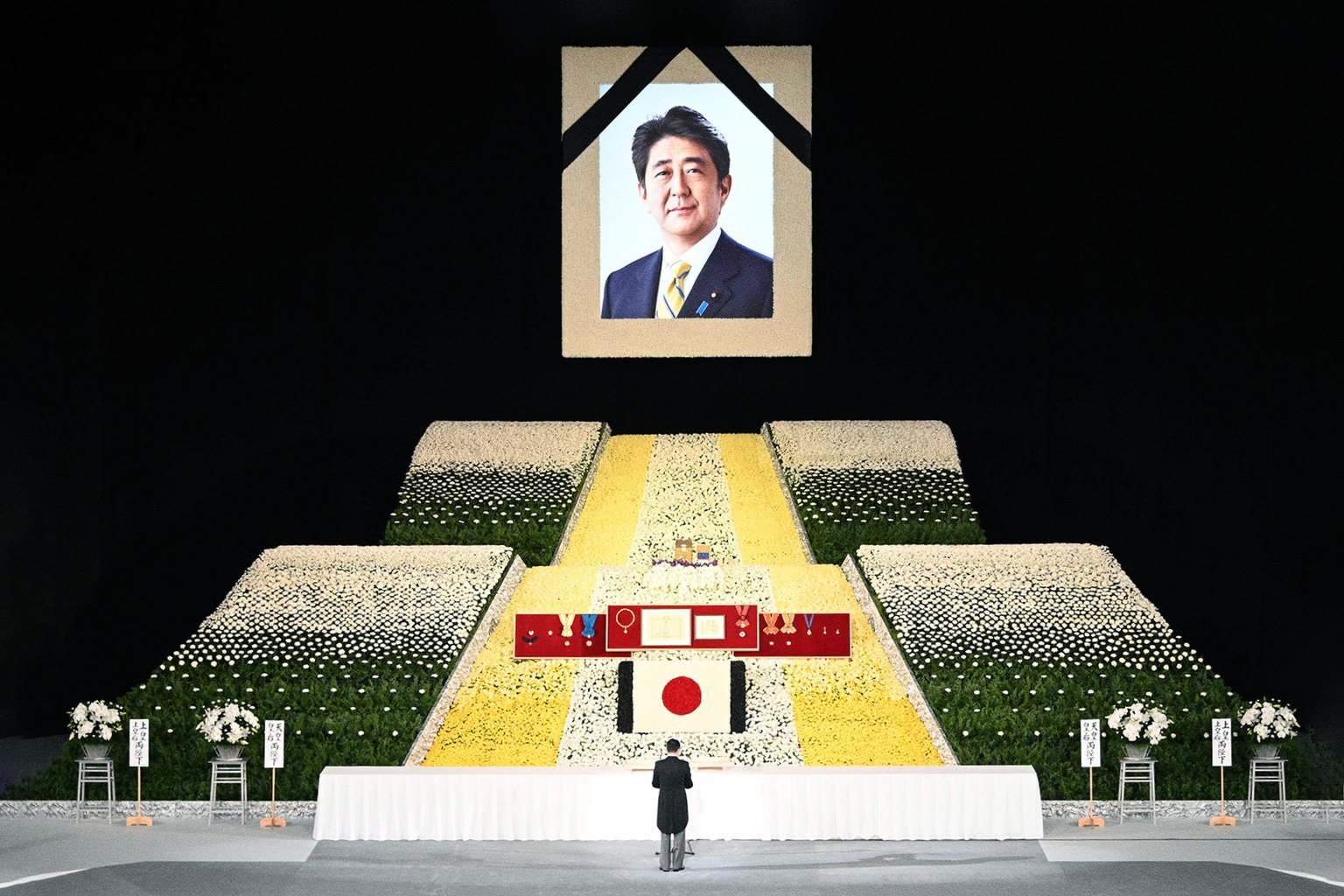 The controversial state funeral for Shinzo Abe was held on September 27. More than 4,300 guests were in attendance at the Nippon Budokan Arena. Among them were over 50 current and former world leaders including the likes of Narendra Modi, Anthony Albanese, Justin Trudeau, Theresa May and Nicolas Sarkozy. Near the venue thousands lined up to lay flowers and offer prayers. Many protesters also gathered in areas surrounding the Budokan to express their dissatisfaction at such an extravagant ceremony for a man who split opinion. Some reports suggested it was more expensive than Queen Elizabeth II’s funeral, which took place a week earlier. Revolution+1, a Masao Adachi film about Abe’s killer, aired a day before the ceremony.

An internal investigation by Japan’s Ground Self-Defense Force found that Rina Gonoi endured physical and verbal sexual harassment on a daily basis between autumn 2020 and August 2021. The Former SDF member filed a case with the defense ministry a year earlier, but it was dropped. There were several tragedies involving children in September. The dead body of Reon Takashima, aged just 2, was found floating in Toyama Bay. In Chiba Prefecture, 7-year-old Saya Minami went missing after heading to the park. Her body was later discovered in the Edo River. And in Shizuoka Prefecture, China Kawamoto, 3, died after being left on a kindergarten bus for five hours. In sport, Mongolian sumo wrestler Tamawashi became the oldest ever winner of the Emperor’s Cup. After over two years of isolation, Japan finally opened its doors to visa-free independent tourists from overseas on October 11. Short-term travelers previously had to book their trips through a travel agency that would manage the itineraries. The 50,000-person daily entry cap was also lifted. It was a huge boost for the tourism industry here as the number of foreign visitors more than doubled from the previous month. From a financial perspective, it was a good time to come as the Japanese yen continued to depreciate, falling below the 150-mark against the US dollar for the first time since August 1990. As a result, Japan spent a record ¥6.35 trillion on currency intervention in October to prop it up.

Alarms began bleating from cellphones and public speakers in northern Japan as North Korea fired a missile over the country for the first time since 2017. People were advised to seek shelter. The Hwasong-12 IRBM flew around 4,600 kilometers, the longest distance ever traveled by a North Korean missile. Antonio Inoki, who brought pro wrestling to Pyongyang, died of heart failure at the beginning of the month. He was 79. In South Korea, 158 people were killed due to crushing in the Itaewon neighborhood of Seoul, including two Japanese. At a cinema in Tokyo, 178 Hirokazu Tanakas gathered to break a world record previously held by 164 Martha Stewarts. In sport, Japan won 16 medals, including six golds at the Judo World Championships. Problems continued to mount for Prime Minister Kishida. On November 20, Minoru Terada quit his post as internal affairs minister, becoming the third member of the PM’s cabinet forced to resign in less than a month. He’d been under fire for various accounting and funding irregularities, including listing a dead person as the supervising accountant on a political funding report. Earlier in the month, Yasuhiro Hanashi was dismissed as justice minister after making a joke about the death penalty. Prior to that, Daishiro Yamagiwa stepped down as economic revitalization minister as he failed to explain his relationship with the Unification Church. “I apologize for the series of resignations. I’m aware of my heavy responsibility for their appointment,” Kishida told reporters.

The controversial Qatar FIFA World Cup kicked off on November 20. Japan began its campaign against four-time champions Germany. The European side deservedly led 1-0 at the break through an Ilkay Gundogan penalty. Then came Hajime Moriyasu’s substitutions. Ritsu Doan and Takuma Asano made a huge impact from the bench, scoring the goals to give the Samurai Blue a historic 2-1 victory. It was the team’s greatest ever result in the competition. The next match, against Costa Rica, was arguably the most disappointing. Expectations were high going into the encounter, but it turned out to be a damp squib. Moriyasu surprisingly made five changes from the Germany game. The decision backfired as Keysher Fuller punished slack Japanese defending to give Costa Rica a 1-0 win. That Costa Rica result meant Moriyasu’s men needed a win against 2010 winners Spain to qualify. It seemed like an even tougher ask than the opening game against Germany, particularly after Alvaro Morata headed home for the Spanish side. Again, it was Moriyasu’s bench that changed everything. Doan equalized with a powerful drive while fellow sub Kaoru Mitoma set up the winner for his childhood friend Ao Tanaka. Another historic night for the Samurai Blue. It set up a second-round tie against Croatia. Daizen Maeda fired the Asian team ahead before Ivan Perišić levelled. A tight game, it was eventually settled by a penalty shootout. The Japanese players didn’t look confident, tamely missing three of the four they took. The journey was over in heartbreaking fashion.

In Shizuoka Prefecture, three nursery schoolteachers were arrested on suspicion of assaulting children. Offenses included holding a boy upside down, slapping the head of another, pushing a girl in the face and threatening kids with a cutter knife. In northwestern Japan, at least three people died as a result of heavy snow. Hundreds of drivers left their vehicles stranded on highways and thousands of homes were without electricity due to the extreme weather. The kanji “sen,” meaning “war,” was chosen as the symbol of 2022, while “Murakami-Sama,” the nickname given to Tokyo Yakult Swallows slugger Munetaka Murakami, was named as the buzzword of the year. In boxing, Naoya Inoue became the first undisputed bantamweight champion in 50 years after outclassing Britain’s Paul Butler.