The last tendrils of morning mist rise through the boughs of the cedar trees and are gone. There is the distant sound of water tumbling down a rocky streambed. A bright green frog peers warily out of a carpet of moss. The tranquility is almost a tangible thing. It has been this way in the steep-sided valleys overlooking the town of Ohara for millennia. And that is primarily because visitors flock to Kyoto — just 15 kilometers to the south — for their fill of culture, history, art and stunning religious artifacts. As a result, they bypass a community that used to be home to royalty, warriors and religious leaders.

Arguably the most famous inhabitant of Ohara was Kenreimon-in (also known as Taira no Tokuko), the empress and wife of Emperor Takakura and the mother of his successor, Emperor Antoku. Antoku entered a 14th-century convent on the outskirts of the town and lived through some of Japan’s most tumultuous times. 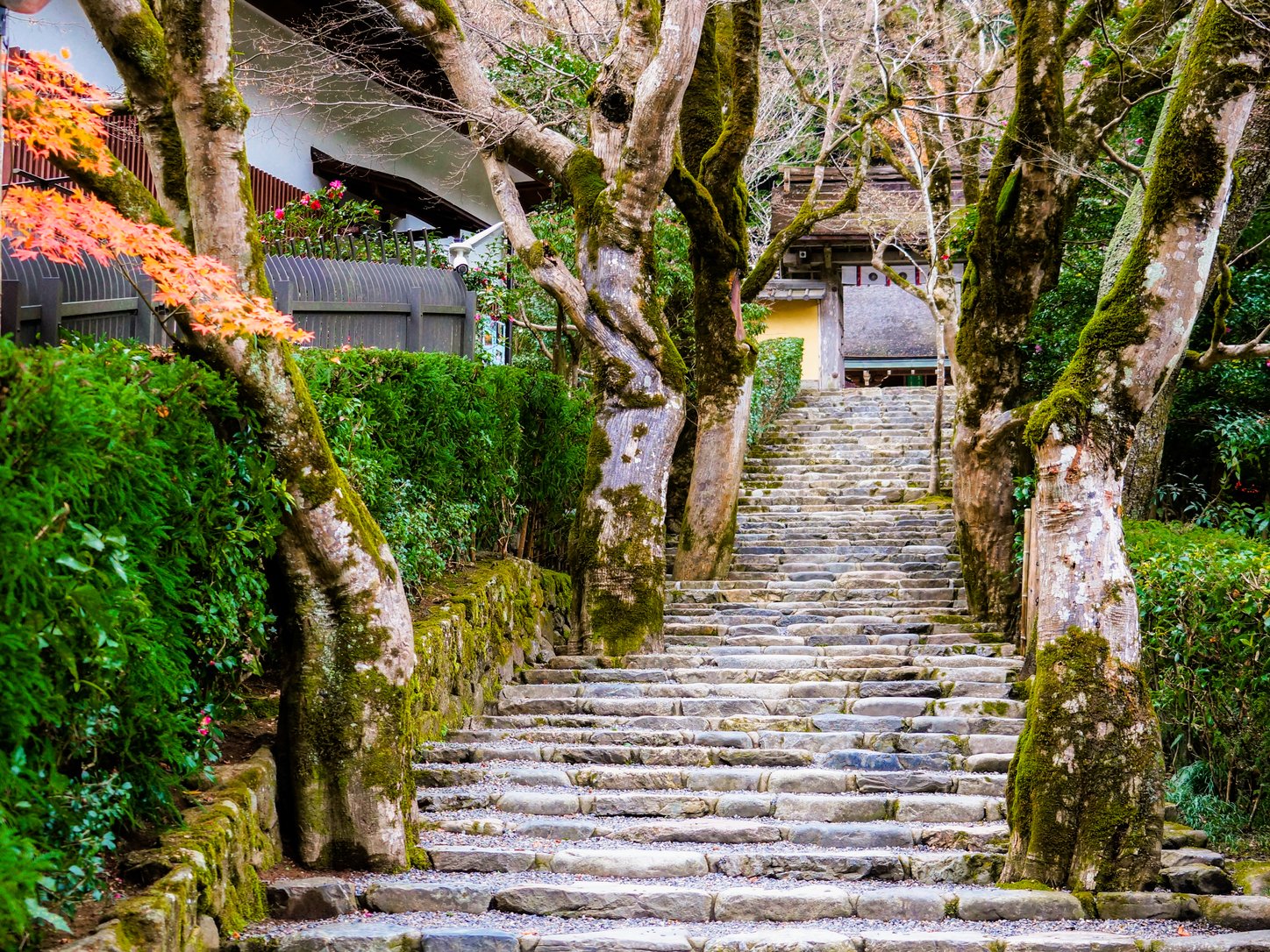 Jakkoin Temple: Rebuilt from the Ashes

Today known as Jakkoin Temple, this compound was established as a convent of the Tendai sect of Buddhism in 594 by Prince Shotoku to honor the soul of his father, the Emperor Yomei. The complex has a tea house overlooking a pond where dragonflies hover above the surface, a series of perfectly manicured gardens and a bronze bell in a wooden tower.

The temple’s original main building was destroyed in a fire in 2000. A Bodhisattva statue that was registered as an important cultural property of the nation was badly charred in the flames. It now stands in a nearby treasure hall along with several thousand carved figures, all of which are approximately 10 centimeters in height. A replacement hall stands on the same spot today. It’s identical to the original, meaning that it would be immediately recognizable to Empress Kenreimon-in. She took up residence there after the Taira clan was defeated in April 1185 by the rival Minamoto clan in the sea battle of Dan-no-ura, near present-day Shimonoseki in Yamaguchi Prefecture.

According to legend, Kenreimon-in tried to drown herself after the defeat but was pulled from the ocean by a rake that caught her long hair.

In September of the same year, she shaved her head, became a nun and took up residence in Jakkoin Temple. She spent her time praying for the soul of her son, who was drowned aged six and the other members of the Taira clan. She died seven years later at the age of 36 and her remains are interred in the temple’s grounds.

Every May, dozens of local women in traditional clothing walk the 2 kilometers from Jakkoin to Sanzenin Temple, in a festival that recreates the journey that villagers took between Ohara and Kyoto to sell firewood.

The trade started in the Muromachi Period (1336-1573) and continued into the Meiji Era (1868-1912). It only came to a halt when gas was introduced to provide heat and lighting in the city.

According to local lore, each woman could carry as much as 60 kilograms of firewood on her head for the two-hour walk alongside the Takano River to Kyoto. They then returned to Ohara with items that they had purchased, such as fresh fish. The Gardens of Sanzenin Temple

Established between 782 and 806, Sanzenin is the most influential temple in Ohara. Members of the imperial family served as abbots from the 12th century and the Shinden main hall served as their residence.

Alongside its extensive temple grounds are the graves of two emperors from the Kamakura Period (1185-1333), Go-Toba and his son, Juntoku. Both former rulers were sent into exile, where they died, but their remains were reunited at this site in 1919. Former Emperor Akihito, who abdicated in April 2019, visited the graves to pay his respects while he was still crown prince. 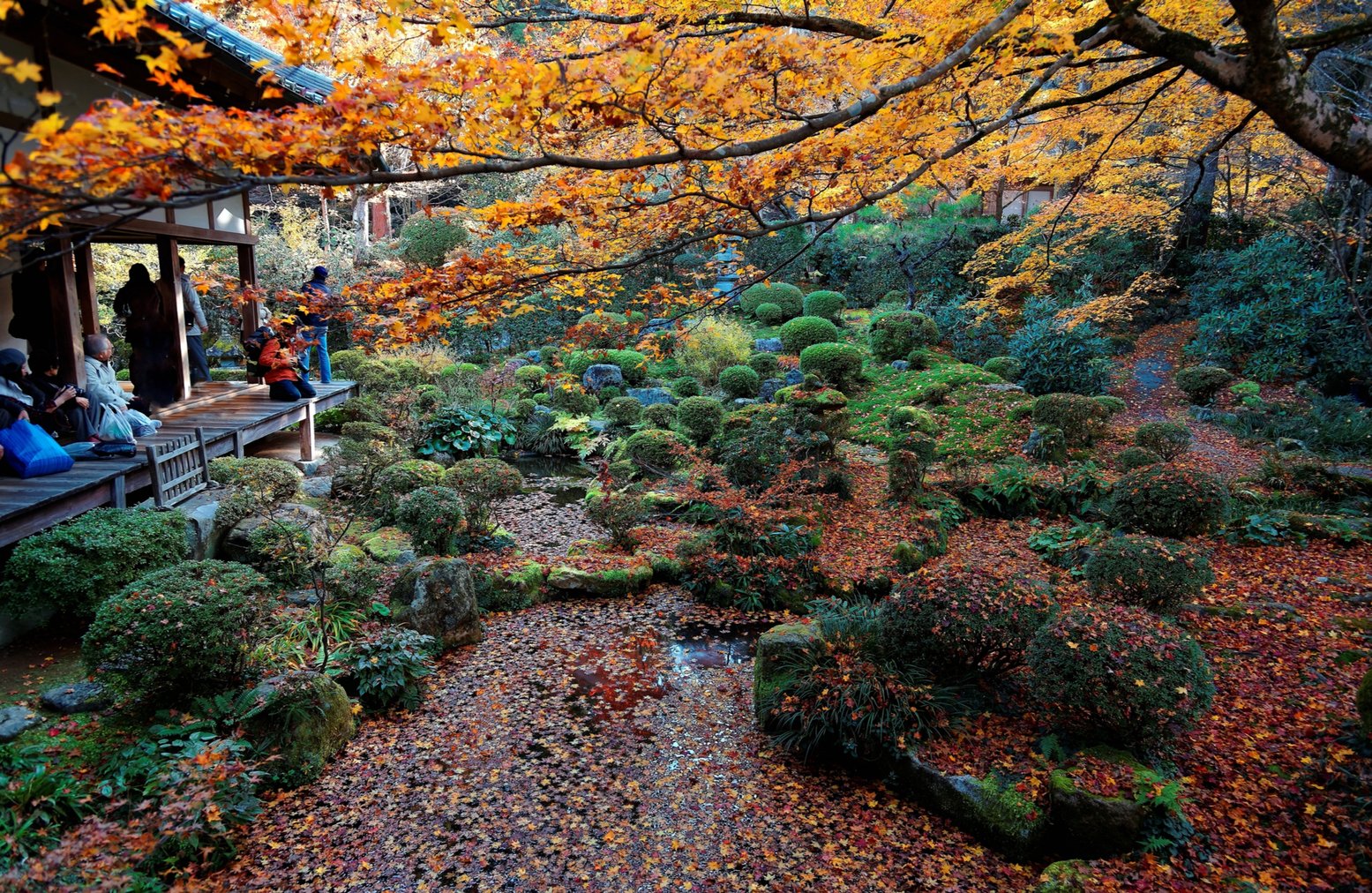 Sanzenin temple looks out across the Yusei-en Garden, a style of traditional garden that is best enjoyed by strolling along its gravel paths. The ground is covered by thick moss, punctuated by cedar and maple trees that are best admired when their leaves are taking on the colors of autumn.

In contrast to the Yusei-en Garden, the Shuheki-en Garden is a place where visitors sit and appreciate the form and flow of the landscape. The optimum position for admiring the garden is on the tatami mats towards the back of the Kyakuden Hall. This spot permits the viewer to take in a panoramic view of the garden directly in front, with the pond, islands and stone lanterns framed by the wooden veranda.

A short distance away is Housenin Temple, which is famous for its gardens. Particularly a pine tree that is believed to be 700 years old. This temple is also known for blood-soaked gruesome floorboards that hold history. They recall the last moments of 380 samurai warriors loyal to the shogun Tokugawa Ieyasu. They opted to commit suicide within Fushimi Castle in August 1600.

Surrounded by a 40,000-strong army of warlord Ishida Mitsunari, the defenders held out for two weeks until the castle was set on fire. Ieyasu’s surviving troops gathered in the keep for a final stand but, when it became clear that their task was hopeless, they committed ritual seppuku. The blood coated the wood and there are clearly defined footprints, as well as marks left by a helmet or armored breastplate. In one area, a human face is faintly discernible, while in another section there are scrabbled fingerprints in the blood where a samurai drew his final breaths.

Further up the heavily wooded hill beyond Sanzenin is Jorengein temple. It’s famous for being the origin of “shomyo” Japanese Buddhist chants after this form of worship was introduced from China around 1,200 years ago.

The chants were brought to Japan during the Nara Period (710-794) by a number of monks, including Saicho, the founder of the Tendai school of Buddhism and Ennin, a priest of the Tendai sect.

The word “shomyo” combines the characters for “voice” and “wisdom.” This form of chanting is regarded as fundamental to all later traditional forms of Japanese music. A “shomyo” piece has 12 notes and is constructed of melody patterns each sung with one breath. When sung by monks, the chants express their religious piety.

Read more about the travel spots near Kyoto that many make the mistake of overlooking:

Kyoto by the Sea: Discover the Origins of Japan’s Cultural Traditions