10 Japanese Castles Where You Can Walk in Samurai Footsteps

Transport yourself to feudal Japan by walking around these castle grounds

Japan witnessed 150 years of widespread warfare during the 13th and 14th centuries as feudal lords jostled for political positioning, leading many noble families to hole up in their manors for weeks at a time, resulting in the adaptation of defensive fortifications.

This architectural development led to the classic Japanese castle design, which was defined by Azuchi Castle, built by Japanese daimyo Oda Nobunaga in the hills overlooking Lake Biwa. The strategic positioning allowed for surveillance of the roads leading into Kyoto, and the extravagant interior allowed Nobunaga to enjoy a lavish lifestyle.

While only the ruins of Azuchi Castle remain, many examples (and replicas) of historic castles inspired by the design and architecture of Nobunaga’s humble abode can be visited throughout Japan. Built in the 15th century, Odawara Castle was ruled for the most part under the Hojo clan, who used it as a strategic point to keep an eye on the surrounding regions. In 1590 the clan was defeated by Toyotomi Hideyoshi, who with this and many other victories reunited Japan. Throughout the following centuries, the castle was destroyed and rebuilt a few times, and the current structure dates from 1960.

Odawara Castle is the town’s pride and joy – and for a good reason. Located less than a 10-minute walk from Odawara Station, the striking white structure stands over cherry blossoms in the spring, making a prime destination for fellow hanami goers but its neighboring park and cafe make for a great day trip from the capital year-round. It is one of the closest castles you can visit if you live in Tokyo.

For more on what to do in Odawara, check out this guide. Arguably the most recognizable structure in Kyushu, Kumamoto Castle was originally built in the 17th century. The main structure stands tall, surrounded by vast castle grounds with many buildings remaining from times now past. Many say that Kumamoto Castle offers one of the best castle experiences in Japan and that you can truly get a feel of life in the Meiji era, shortly after the Satsuma Rebellion.

Kumamoto Castle sadly crumbled after a severe earthquake in 2016 and there are still brilliant efforts being put towards its reconstruction. Until then, visitors can partially visit the area. At the time of writing, the second unavailing of the reconstruction is scheduled for April 26, 2021.

Plan a future trip to Kumamoto with our helpful guide. 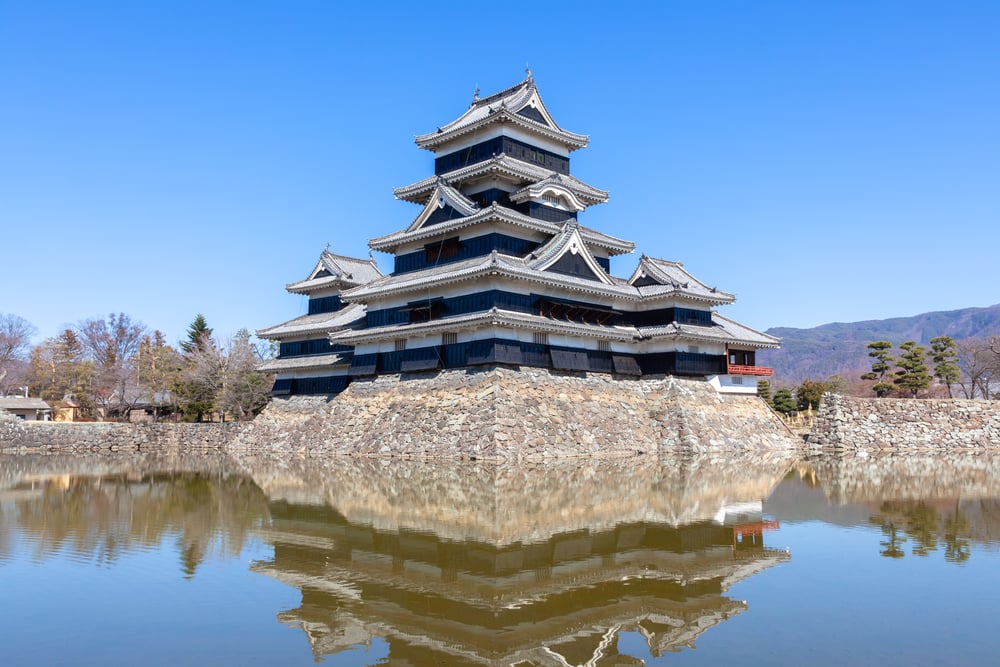 Dating back to 1593, Matsumoto Castle is the oldest castle remaining in Japan and one of the few castles designated as a National Treasure, along with Kumamoto and Himeji castles. Home to historical documents, artifacts and samurai armor on display, history-buffs make this sightseeing spot a must-see.

The beauty of this castle rests in the vast surrounding waters, where visitors can often see swans swimming away, and its dark colors stand out beautifully against the snowy Nagano winter. In the spring, Matsumoto Castle is also a popular cherry blossom viewing (hanami) spot for locals and domestic travelers.

See what else there is to discover in Nagano here. Okayama Castle’s construction dates back to the late 16th century when local daimyo Hideie Ukita. This castle boasts a black-lacquered wood construction, which later gave it the nickname of “Crow Castle”. What is particularly interesting about it is that when the castle was built, a lot of labor was put into making way for the nearby Asahi River to flow to the rear of the castle, forming a natural moat.

Climbing the castle stairs and inspecting the historical exhibits inside the building, you can feel the spirit of the ages past. While the castle itself is a beautiful sight, especially during the fall, here you’ll also find a variety of activities, from samurai armor try-ons to pottery workshops.

Learn more about what to do in Okayama here. Perched on top of Mt. Torafusu, at the mouth of the Kinokawa River, Wakayama Castle was first built in the 16th century. It was originally named Ota Castle, belonging to Saiga Ikki, before it was captured by Hideyoshi and rebuilt later as Wakayama Castle. Later in the Edo period, the castle served as an important branch of the Tokugawa government.

The castle was destroyed during World War II only to be rebuilt 13 years later using concrete, but don’t let this fool you into thinking the structure doesn’t faithfully recreate the presence of the original building. This will hopefully preserve the structure through future earthquakes and other natural disasters to come. At its feet, find blooming cherry trees in the spring.

See what else there is to do in Wakayama City here. 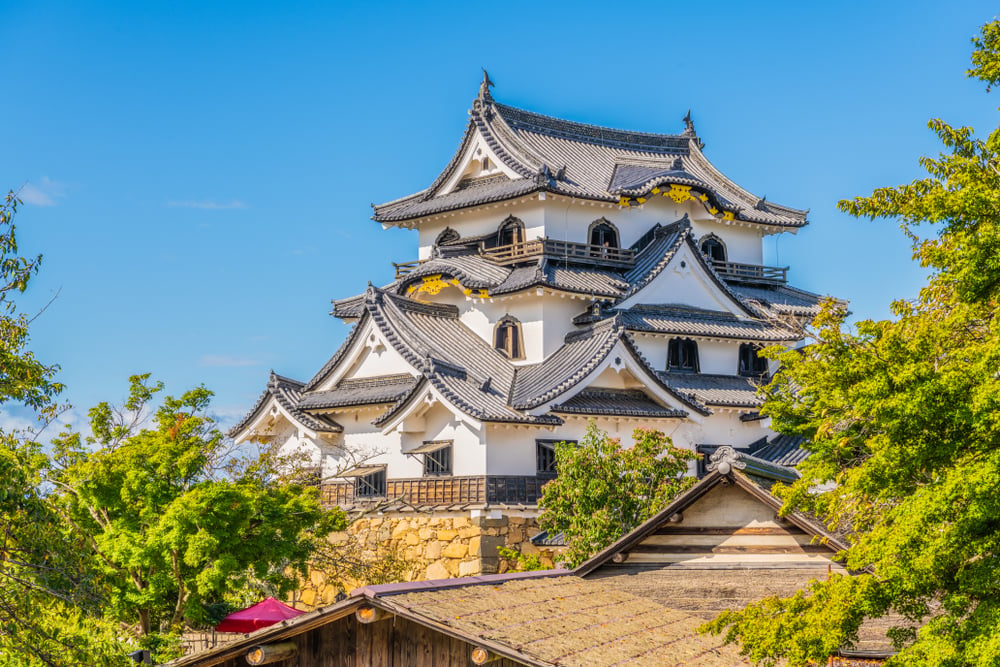 Completed in 1622, this castle has survived wars and natural disasters with only some of its parts reconstructed. Although small in size, Hikone Castle is one of the five castles designated as a national treasure, thanks to blending multiple architectural styles and is considered the most important historical building in Shiga Prefecture.

The Genkyuen Garden next to the castle was originally built as part of it, but nowadays tickets to the garden are sold separately. Other than the circular trail, the view of Hikone’s castle main keep from the garden is also worth visiting. For even more picturesque scenery, try to schedule your visit during the cherry blossoms season and enjoy the festival held at the castle’s grounds.

Plan a day in Shiga with this handy guide. There is not much left of this castle located in Asago city. Time had its toll on the castle as it was abandoned and left to disintegrate in the 17th century with some ruins being restored in the ‘70s and ‘80s before becoming a tourist site. What does make the Takeda Castle ruins are the views of it being engulfed in thick fog, making it seem like it is floating in the sky. Also known as the Machu Picchu of Japan, the Takeda Castle is believed to have been the inspiration for settings in Studio Ghibli’s movie Laputa: Castle in the Sky.

To increase your chances of seeing the castle floating, try to visit in autumn, from September through early December. The sea of clouds is usually visible from dawn to 8 am on days when a high difference in temperature is observed. This castle is hard to access, we’ll admit, but it is well worth the hassle. After the renovation work in 2011, the color of the roof was restored to the original, and unique for Japan, brick red that it had before it was destroyed as a result of the revolution against the military government of the Edo Period. The oldest on this list, the construction of the castle started in the 14th century.

At the Tsuruga Castle Park, you can also visit the Rinkaku Tea House and try some green tea yourself. During cherry blossom season in April, have a picnic on the well-tended lawn. Do not miss the samurai exhibition inside the castle and the view of the park from the top!

See what else there is to do in Fukushima here. Himeji Castle is, by all means, the star among Japanese castles. One of the twelve original castles, a designated national treasure, and a UNESCO heritage site, it is often considered to be the most beautiful in the country. Its exterior resembles the type of castle you see in classic Disney Movies and the cherry blossoms around it only add to its beauty when in full bloom.

Also known as the White Heron Castle due to its shape resembling that of a heron taking off, it has also served as a setting for a few movies like James Bond: You Only Live Twice. Check for events such as illuminations or projections onto the castle before you go as they take place regularly. Shuri Castle is by far the most recognizable castle in Okinawa but the Nakagusuku Castle ruins are truly the sign of the wealth and grandeur of the Ryukyu Kindom. The Ryukyu Kingdom dominated maritime trade with China during its reign and unified the Okinawan islands.

While there isn’t much of the castle left today, walking among the vast ruins will still take you about 30 minutes and even on a cloudy day, you can appreciate the resilient construction and masonry. It is rare to be able to get so close to history but here, visitors can walk through the multitude of areas and even walk along the walls. As a bonus, visitors are rewarded with beautiful views of the surrounding city.

Traveling to Okinawa, here are more things to see and do.