Whether it is the untamed grandiosity of its natural scenery, the deeply reserved and yet curious and friendly vibe of its people, or perhaps other reasons altogether, Kumamoto Prefecture has long drawn adventurers and seekers into its fold.

Swordsman Musashi Miyamoto made his way to Kumamoto Prefecture in the year 1640 where he meditated and wrote The Book of Five Rings, his famous account of martial arts, inside the Reigando (Spirit Rock Cave), which is located in western Kumamoto city at the foot of Mount Kinpo. He passed away inside the same cave in 1645.

Hoping to encourage both tourism and relocation to Kumamoto following the devastating earthquakes that struck the area in 2016, the prefectural government released a promotional campaign video in 2017 depicting Miyamoto’s move to the region. Departing at night on a creaky wooden boat amidst an atmospheric scene of floating candles, Miyamoto is seen shouting up to his admirers, who have assembled on a bridge to bid him farewell: “Kumamoto experienced two large earthquakes in Genna Year 5 [1619] and Kan’ei Year 2 [1625], but they recovered beautifully, and they rebuilt the Kumamoto Castle. I want to go and see with my own eyes a region with this kind of strength – and pain. I’m going to Kumamoto! And I want you all to someday go there too!”

Kumamoto Castle, which is located in Kumamoto city, is presently being rebuilt following the 2016 earthquakes, just as it was in the 1600s. Now partially closed to the public for repairs to the damage it sustained, its stone walls are being meticulously restored to their exact positioning.

Adjacent to the castle is the former home of Irish-Greek writer Lafcadio Hearn (known in Japanese as Koizumi Yakumo), another global wanderer who made Kumamoto his home for three years.

Fascinated with ghost stories and the underworld, Hearn was also firmly a man of the common people. He was once quoted as saying with regard to his adopted home, “The future of the greatness of Japan will depend on the preservation of that Kyushu or Kumamoto spirit, the love of what is plain and good and simple, and the hatred of useless luxury and extravagance in life.”

Indeed, it has been this attraction to a slower and more authentic pace of life that has drawn – and continues to draw – many a curious spirit to Kumamoto city and surrounding areas.

The region of Mount Aso, located some 50km to the northeast of Kumamoto city, has served as a muse for artists, organic farmers, healers and self-professed hippies to create communities centered around natural living. This trend accelerated following the triple earthquake, tsunami and nuclear disaster of 2011 in Tohoku, when people in the disaster area (as well as in nearby regions such as Kanto) took the incident as a wake-up call to leave their urban environments in order to source their own food and live in harmony with the land.

A visit to Mount Aso itself, an active volcano featuring soaring peaks and a massive circular caldera, provides picturesque views that make it a gorgeous place to visit from any vantage point. One such point is Mount Daikanbo, located on the northern end of the caldera, which offers views of Aso Gogaku (five peaks) and the rolling green Kusa-Senrigahama plains.

Aso Shrine, a government-designated National Treasure with a 2,500-year-old history, is presently recovering from damage sustained in the 2016 earthquakes, although visitors are able to come here to worship. Here the natural spring water is sacred and promises qualities such as longevity to those who drink it.

The onsen villages surrounding Mount Aso are enchanting destinations where visitors can lose themselves in the healing vapors of secluded hot springs and the stunning mountain atmosphere.

While five different onsen are scattered at the foot of Mount Aso, the most accessible, and perhaps most alluring, is Uchinomaki Onsen. The therapeutic waters of Uchinomaki’s hot springs are drawn from deep within the heart of Mount Aso.

After a relaxed stroll around the Uchinomaki Onsen district, a quaint area lined with shops, restaurants and bars, now is as good a time as ever to get over any squeamishness and sample basashi – that love-it-or-hate-it local delicacy of raw horse meat.

Located about 20km north of Mount Aso is Kurokawa Onsen, a hot springs resort town with a multitude of pristine outdoor baths to choose from. A well-coordinated community effort has kept the town rustic, clean and free of dilapidated buildings or neon signs.

Winding your way through Kurokawa Onsen’s atmospheric streets, you will find nearly 30 ryokan (local inns) to choose from. Enjoy onsen-hopping with the town’s system of wooden passes that allow visitors to enter up to three additional onsen.

Most proprietors of Kurokawa Onsen’s quaint cafés are happy to oblige visiting tourists, as well as offer unique treats such as banana-cucumber smoothies – a bizarre-sounding combination that is in fact amazingly delicious. Be sure to indulge in the Kumamoto specialty of akaushi beef.

Off the west coast of Kumamoto Prefecture is Amakusa, a remote island group consisting of two large islands and hundreds of smaller islands. It’s hard to believe that bucolic Amakusa – where dolphins play amongst the gentle waves and the affable locals warmly greet strangers on the street – was once the site of one of Japan’s greatest massacres.

Rich with rural and natural scenery, the region’s isolation allowed missionaries to convert the local feudal lord and a majority of the islanders to Christianity before the religion was banned in the early Edo period. While this circumstance later led to bloodshed, today the islands are dotted with historic churches and museums dedicated to this unique period in history.

History, in other words, continues to weave its way through each of these stories of adventurers who have made the various corners of Kumamoto Prefecture their home, and who, in doing so, have also paved the way for others who will continue to come after them. 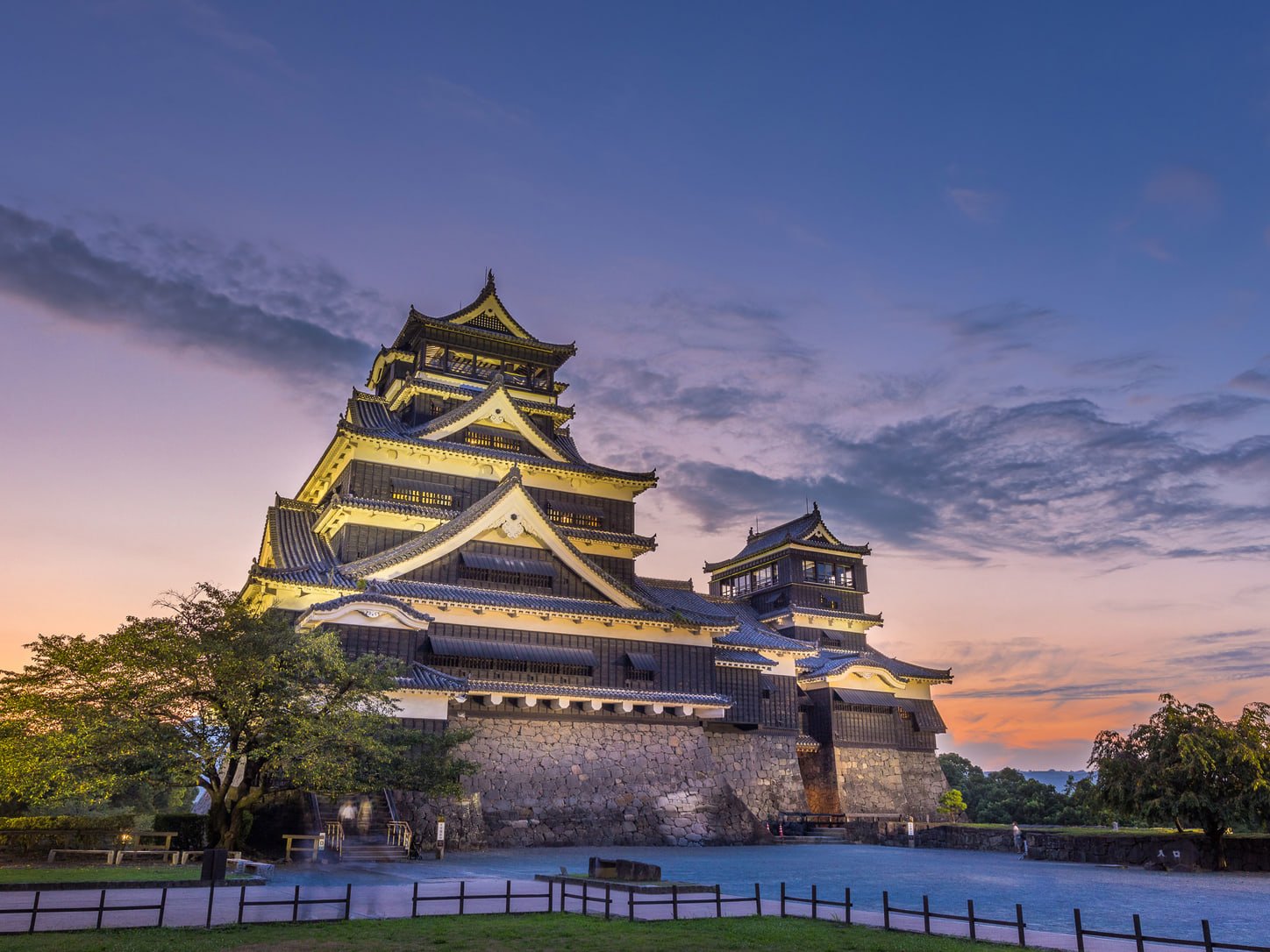 TRAVEL BACK IN TIME

Take a Kumamoto Castle Site Tour in Kumamoto city
For an extra 5% off use our coupon code TOKYOWEEKENDER during check-out.