As the timing to select the Chinese character best describing the year approached, it wasn’t a matter of discussion what theme it should refer to — we all know what rocked our world in 2020. The debate was more about which of the countless possible characters related to it would best define the state of nothingness we all lived through in 2020. Was “染” (sen, somaru) from 感染 (kansen, infection) the best choice? Was it “無” (mu, nothing) for the loss of a whole year, or was it “家” (ie, house) for the rediscovering of the warmth of our homes and the sheer amount of time we spent in them this year for good or bad? Or was it something completely different?

The organizer of the Kanji of the Year event, the Japan Kanji Aptitude Testing Foundation — which runs the event since 1994 —, however, made its final choice today and revealed, in a ceremony at the Kiyomizu Temple in Kyoto, that this year’s kanji was ‘Mitsu’ (密), meaning “dense.” The kanji was picked to best describe our greatest fear in 2020 — getting in crowded areas amid the rapidly-spreading novel coronavirus. The kanji also refers to the 3C’s (Closed Spaces, Crowded Places, Close Contact Settings) that the Japanese government requested its citizens to avoid in order to prevent the spread of Covid-19. “Mitsu Desu!” was also widely popularized by Tokyo Governor Yuriko Koike who would often use the phrase to remind journalists not to get too near her during press briefs. The phrase even inspired a game this year and became the top buzzword of 2020.

The selection of the word was based on characters recommended by the general public. Among a total of 208,025 entries received this year, “mitsu” ranked first with 28,401 votes.

Last year, “rei” (令) was selected, reflecting the beginning of the new Reiwa Era in Japan.

In a recent post on our Facebook page, we asked you to guess the kanji of the year and many of you guessed correctly. Other choices included 鬼 (oni, demon) inspired by a demonic year and the popularity of Demon Slayer, 残 (zan, nokoru, to remain), which a reader pointed out could be used as ikinokoru (to stay alive) and also for zannen (regret, something wasted), while others suggested that the character for “shit” would most correctly describe the entire year. We sort of agree with all of these…

What was your kanji of the year? Let us know in the comments! 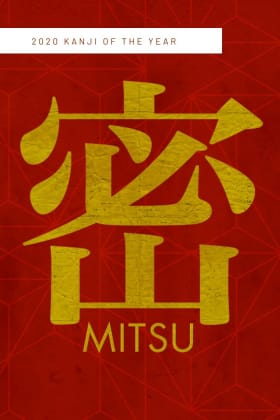