Wigmaker Tomihiro Kono wants you to be whoever you want

The Portuguese man o’ war is the sphinx of the sea. Oft mistaken for a jellyfish, the conspicuous, yet mysterious, creature is in fact a colony of cloned zooids clustered together. The poisonous tentacles grow long enough to droop to the ground from the kasagi of a Meiji Jingu torii. Its bulbous sac bobs in the Pacific, pulsating in luminescent shades of blue, mauve and purple.

The other 110 fancy wigs created over the course of three years range in style from The Sex Pistols meet birds-of-paradise to a tousled turquoise blue bob inspired by The Little Mermaid (the 1975 Japanese anime version).

A cropped violet do has thin braids akin to those adorning Italian Renaissance maidens. “A little sporty style I would say,” says Kono. “This one I didn’t have an inspiration, but I created it out of my imagination.”

Inspiration and imagination are the simpler aspects afforded Kono during the creative process as he spends weeks meticulously hand-stitching each wig. He starts with a lace fabric draped over a mannequin head, and then dyes the human hair, knotting each strand of hair to the lace foundation. The result is artwork that is just as arresting and enigmatic as the Portuguese man o’ war.

“My passion is to transform people into various characters – a dramatic change in life,” says Kono. “Transformation for me means having several personas – social masks.”

The Wigs of Perception

According to the book’s concept, persona is the facade we display to the world and is but a small component of our complex manifest. A wig allows its bearer to impose a striking impression upon others, while also concealing the self. As philosopher David Hume says, “We are never intimately conscious of anything but a particular perception.”

Each wig in Personas 111 is photographed by Kono’s partner, Sayaka Maruyama. Kono chose Phan to model for each photo because of his androgynous looks, and Greek statuesque appearance.

Wig making, and Kono’s fascination with wigs, begins in ancient Greece, where hair marked social status, and actors wore elaborate masks and wigs on stage. Wigs came to prominence beginning with the 17th century French court with Marie Antoinette, who Kono cites as an influence, debuting her towering pouf hairstyle in 1774.

In Japan, geisha owned no less than three wigs to wear for special occasions. The first wig Kono bought was a professional geisha wig he found at an antique market. “I was impressed with its quality and so I wanted to learn how it’s made,” he says.

From the Mountains of Ehime to the Runways of Paris Kono grew up between the mountains and the coast of western Shikoku in the rural town of Shitaba. He built his toys using wood and natural materials he scavenged in the forest. 1980s Japan was also the golden age for manga and anime.

As a young teenager on every visit to the hairdresser Kono selected a new hairstyle based on a favorite character such as Ryota Miyagi from the manga Slam Dunk, whose hair was cropped on the sides to the extreme.

“The hairdresser actually did an amazing job, but my mom was so furious,” says Kono.

He moved to Tokyo in his early 20s and apprenticed under influential hairdresser and mentor Takahiro Uemura, founder of the salon Dada Cubic in Harajuku. Uemura published several books of his hairstyles, impressing upon Kono the importance of sharing his vision – as well as the importance of education.

There, surrounded by the “positive and crazy vibe” of early 21st-century Harajuku, Kono studied classic geisha hairstyles, mastering the various combs and materials used to create the elegant coiffure.

Taking the World by Storm Enamored with British music and youth culture, Kono relocated to London in 2007. He set up his head props in Spitalfields Market every Thursday where his work was discovered by the magazine Dazed and Confused. He began receiving commissions to work as a hair stylist for prominent fashion magazines.

Following a move to New York in 2013, Kono met designer Junya Watanabe, and the duo collaborated on nine runway shows for Junya Watanabe Comme des Garçons. Gigi Hadid wore one of his wigs on the cover of W magazine.

Bored with the limitations of hairstyling for fashion shows and editorials, in 2017 he founded the independent publishing company konomad editions with Maruyama and took up wig making full-time. Kono taught himself by reading traditional wig making books and watching YouTube tutorials. “I had many trials and errors,” he says.

He published his first book, Head Prop, in 2017 and began hosting exhibitions of his works in galleries in New York, Tokyo and Paris. Wigs as art is not new. Andy Warhol framed one of his silver wigs and gifted it to Jean-Paul Basquiat – a piece that eventually sold at Christie’s for $10,600.

The extent to which Kono exhibits his work, however, is groundbreaking. His exhibitions are interactive installations where wigs dangle from the ceiling and visitors can try them on – becoming whoever they want to be.

“I consider wig making as arts and crafts,” says Kono. “The process is for me very artistic but unfortunately it hasn’t been considered as such.”

What’s Next for Tomihiro Kono? Covid-19 derailed the exhibitions Kono had planned in the wake of his latest book release, but he is now inviting guests to his New York studio for private sessions. He also released a collaboration with Collina Strada’s New York-based designer Hillary Taymour to create a mask–wig combo called the Quarantine Collection.

He hopes to exhibit in Japan again soon, publish more books and eventually launch a wig making academy. He says that in the digital age, people find security by creating multiple personas through social media, and wigs can become essential to “people’s continuous desire to transform” – allowing us to expose the mosaic of characters lurking beneath.

Tomihiro Kono’s book, Personas 111: The Art of Wig Making, is available at konomad.com. Follow Kono on Instagram at @tomikono_wig 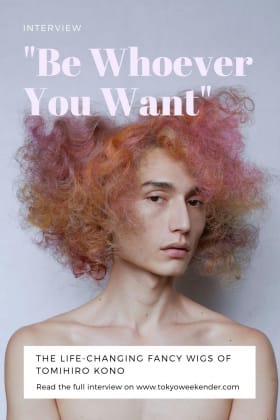