Climate change is a soft-sounding term, like a minor twinge you’d feel upon nudging up the thermostat. It is however, a rather more insidious beast. Much like Covid-19, it sees no borders, cares naught for your wealth nor the color of your skin and none will be spared its repercussions. Or in the matter-of-fact words of David Wallace-Wells, author of The Uninhabitable Earth: “It is worse, much worse, than you think.”

Climate change caused by global warming poses the ultimate threat to our species. If unaddressed, it could set in motion a chain of catastrophes, with truly biblical results. Given our current reliance on fossil fuels, conservative scientific estimates put an average rise in global temperatures by 2050 at around 1.5 to two degrees. The extra 0.5 degree alone could result in 150 million more annual deaths from air pollution – that’s 25 holocausts, notes Wallace-Wells.

Based on the celebrated Paris climate accords, two degrees is our tipping point into oblivion. The direst predictions estimate a rise of six to eight degrees by 2100. At this heat, the Arctic eventually becomes tropical, Tokyo an Oriental Atlantis, and the equator a literal hell on earth. To avoid such a mass extinction, humanity needs to act accordingly.

“In 2018 in Japan, more than 1,000 people died during an unprecedented heat wave. In 2019, scientists proved it would have been impossible without global warming.”https://t.co/IiSxnnup8t

Japan: “Fossil of the Day”

Currently, Japan’s foremost concern is calibrating itself to a new way of living, hopefully no longer shackled by the dreaded fear of Covid-19. The scars of the ongoing pandemic are still raw, leaving lasting effects on geopolitical relations and individual living habits. But there is a silver lining, and the powers that be must recognize it.

We have seen the dangers of being caught like a deer in the headlights, attempting to deal with the coronavirus crisis after we had crashed through the windshield. There are valuable lessons to be learned, and hopefully, transferred to more damaging crises that loom over the horizon. The time for climate action was yesterday, the least Japan could do is act now.

“If the current discussion continues in Japanese government, there’ll be no change to climate action,” laments Mika Ohbayashi, director at Japanese NGO the Renewable Energy Institute. “There is a complete lack of preparation.”

While climate action is discussed within the halls of the National Diet, it’s often buried deep within the political discourse, letting economic concerns take precedence. Japan’s continued reliance on coal-powered energy and fossil fuels as a commodity – it is one of only three countries still exporting coal-fired power plants – is indicative of this ugly truth. It’s no wonder Climate Action Network awarded Japan the satirical “Fossil of the Day” accolade for a second time last December.

“Japan, however, has failed to alight upon the same levels of common sense”

Global carbon emissions fell by 17 percent during coronavirus-enforced lockdowns – and by as much as 30 percent in some countries – offering tangible evidence of the pollution dirty fuels effect on the environment: smog clouds lifted from towns in north India unveiling the Himalayas for the first time in decades, Los Angelenos inhaled air as fresh as on an alpine peak, while improvements in China’s air quality eclipsed even those of the 2008 Beijing Olympics air pollution action campaign. Subsequently, countries across Europe and various US states built green policies into their post-pandemic economic recovery strategies. Japan, however, has failed to alight upon the same levels of common sense.

In the nation’s ever-growing stimulus package, recently surpassing ¥110 trillion, the lack of funds directed toward renewable energies is concerning. Instead, Prime Minister Abe’s administration is championing the Go To Travel campaign; a wild card in the stimulus deck incentivizing Japanese citizens to bolster the economy through travel discounts.

“The government wants to get back to the previous normal, to accelerate people’s tendency to go abroad and to support the aviation industry, which will lead to more use of fossil fuels,” says Ohbayashi. “Instead of helping climate action, the policy is backwards. Clearly, the government doesn’t see a link between the pandemic and climate crisis.”

Japan #meti_NIPPON should stop promoting #coal-fired power at home and abroad. Even "highly efficient" #coal-fired generators also have a negative impact on the environment. #Coal is no longer economically rational. #NoCoalJapan https://t.co/oztK71Tyd8

The importance of linking the two crises is a determining factor for Japan’s environmental future. “The coronavirus is a phenomenon, warning humans of the dangers of interfering with nature. The climate crisis is the same. But I’m skeptical this situation will lead us to climate action, and I’m really worried about that,” says Ohbayashi.

Some sectors of Japanese society have taken matters into their own hands, with major companies, including Hitachi, NTT Data and Toshiba, announcing long-term remote-work plans. “Increased digitalization of our workplace will be accelerated. We have to say ‘this is the new normal,’” says Ohbayashi. “It’s not so much a drastic change, but I think we’ll see a slow shift toward a more decentralized society.”

“We have to say this is the new normal”

Ideally, companies will begin downsizing to smaller office spaces or vacating urban centers, with fewer commuters squeezing onto the endless conveyor belt of rush-hour trains. In the short term, this nullifies the chance of future waves of Covid-19. In the long term, Japan will be considerably more energy efficient.

Energy is the operative word for climate action. Ohbayashi sees a realistic future where Japan can achieve 100 percent nuclear-free, renewable energy production through increased photovoltaic solar farms and by harnessing hydroelectric and wind power. The timeline for this goal rests upon individuals’ and governments’ willingness to change their lifestyles.

But this is easier said than done. British scholar Timothy Morton describes climate change as a hyper-object: a complex and multifaceted concept, so heavily distributed over time and space as to be practically unfathomable. It’s as though our brains short-circuit when contemplating the true scope of climate change’s impact on our future, and thus we tend to disregard it.

The Future of Climate Change is Now

Furthermore, climate interest in Japan already pales in comparison to many of its international counterparts. Ohbayashi and her peers consider altering public perception as one of their greatest challenges. Addressing immediate energy goals could be vital in turning the tide. Japan’s 2030 target for renewable energy production is 22 to 24 percent. Primarily thanks to the efforts of local NGOs, it’s on track to surpass those numbers. Ohbayashi would increase the target to 50 percent. “That would give a huge message to the market and the investors.”

She says the power sector must also be further “unbundled” – a diversification process bringing more providers into the energy sphere, allowing for cost-efficient production and fairer trade of renewables.

Japan’s ultimate goal has to be complete eradication of fossil fuel consumption. But as the world’s sixth highest greenhouse gas emitter, its renewable energy policies still leave much to be desired. It’s time to get the house in order; the future of humanity is at stake. If stumbling through the Covid-19 crisis wasn’t enough of a wakeup call, then what will it take? 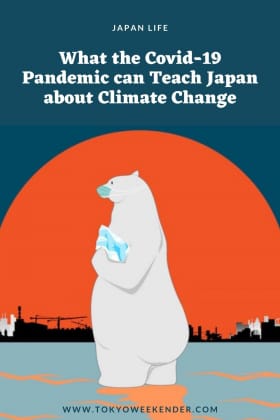