The Most Beautiful Villages in Japan

Otama village, a bucolic little settlement at the foot of Mount Adatara in Fukushima Prefecture, made national headlines in January when its residents stood defiant against government plans to erect more photovoltaic solar panel cells within its scenic confines. The residents were fighting to maintain Otama’s gorgeous visage, naturally tuned over millennia by tectonic processes, weather erosion and little human interference.

They received the backing of the Most Beautiful Villages of Japan organization, a non-profit preservation group with 64 towns and villages known for their spectacular natural resources under its stewardship. As Yoko, a representative from the group told me, “The main reason [for creating the organization in 2005] was to encourage small villages to be independent, to protect their resources and to pass those resources on to the next generation.”

As Japan continues to build exponentially outwards, to defy global climate protocols, to concrete over its rivers and scar its countryside with long, concreted roads to nowhere, the Most Beautiful Villages of Japan enters arguably the most important phase of its short life. Here is a collection of some of the most picture-perfect towns under its protection: Sai village rests upon Honshu’s northern tip in frigid Aomori Prefecture. Sitting on the western edge of Shimokita Peninsula, also known as Broad Axe Peninsula for its uncanny resemblance to the bladed logging tool, Sai is renowned for its archaeological bounty, including scavenged pottery that dates back to the Jomon Period (14,000–300 BC).

Such intriguing finds support the theory that Aomori was once home to Japan’s most ancient civilization. Today the village is typified by its coastal topography, where a procession of jagged and mythical-looking white volcanic rocks stand sentinel upon the shores. Though Wazuka tea now only accounts for around 2% of all tea consumed in Japan, the village of the same name has an 800-year history in the business. Wazuka in rural Kyoto Prefecture looks plucked straight from a Tolkien creation, with its rolling green hills of tea leaf plantations, and its distinctly placid way of life. Around 300 tea-growing families still call the area home, while the NICE (Never-ending International workCamps Exchange) program works in coordination with the village to keep the tradition alive. Kawanehon, a town in the upper reaches of Shizuoka Prefecture’s Oi River, is almost entirely enveloped by forested mountains. The area is registered as a UNESCO eco park due to its abundant primeval forest and the unhindered, arterial river that dissects it. For the best views, the Oigawa Steam Locomotive traces a line through Japan’s surround Southern Alps and bridges over the Oi River coursing underneath. 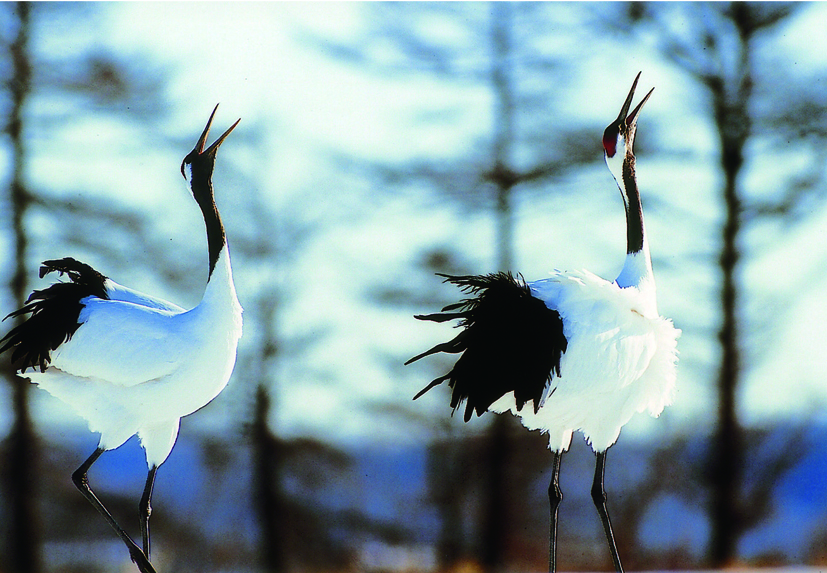 Tsurui is a tiny village hidden in the vast, icy climes of eastern Hokkaido. Its landscape is dynamic throughout the year: the village is surrounded by lowing cows and marshy plains covered in wild grasses every summer, before taking on the appearance of an inhospitable, if stunning, frosty tundra in winter.

The largest draw for visitors is the nearby breeding ground of one of the world’s rarest and most graceful avian creatures: the red-crowned crane. In 1996, the cranes’ dinosaur-esque squawk was officially designated one of the 100 Soundscapes of Japan. Chizu is both a harkening back to Japan’s past and a gallery of natural art; the fall foliage season is the annual highlight, which can be viewed along a charted course on the Chugoku Mountains Nature Trail. Tarama, a potato-shaped speck of land midway between Okinawa’s Miyako and Ishigaki islands, is one of the few island villages registered as part of the Most Beautiful Villages of Japan. Ecologically it resembles the tropics, with temperate saline waters that are home to coral reefs and schools of lolling sea turtles.

On land, vast sugar cane fields cover the terrain; the wind blowing their saccharine smells throughout the village in harvest season. And culturally, its Chinese influences are prevalent throughout, from the rainbow-hued, festival-season iconography to the Feng Shui-dictated orientation of Tarama’s Fukugi trees Kamikatsu, a provincial town in Tokushima, Shikoku, is broken down into 52 smaller subdivisions, farms, hamlets and villages. The settlements tumble down the deep green valleys, and vertigo-inducing gorges of Tokushima’s mountains, while a rare form of mountain rice farming takes place on tiny paddies etched into the slopes.

The cedar forests are populated by deer, wild boar and tanuki (racoon dogs) – notorious in Japanese folklore for their conniving nature. Kamikatsu is also set on reaching the goal of a ‘zero-waste town’ by 2020, making it a bit of outlier in a country much-maligned for its lack of environmentally friendly national policies.