On March 3, all across Japan, people celebrate the country’s girls in a traditional festival called the Hina Matsuri, literally ‘Girl’s Day’. During the joyous time, families wish their daughters happiness and success, health and beauty, throughout their lives via decorations and parties. 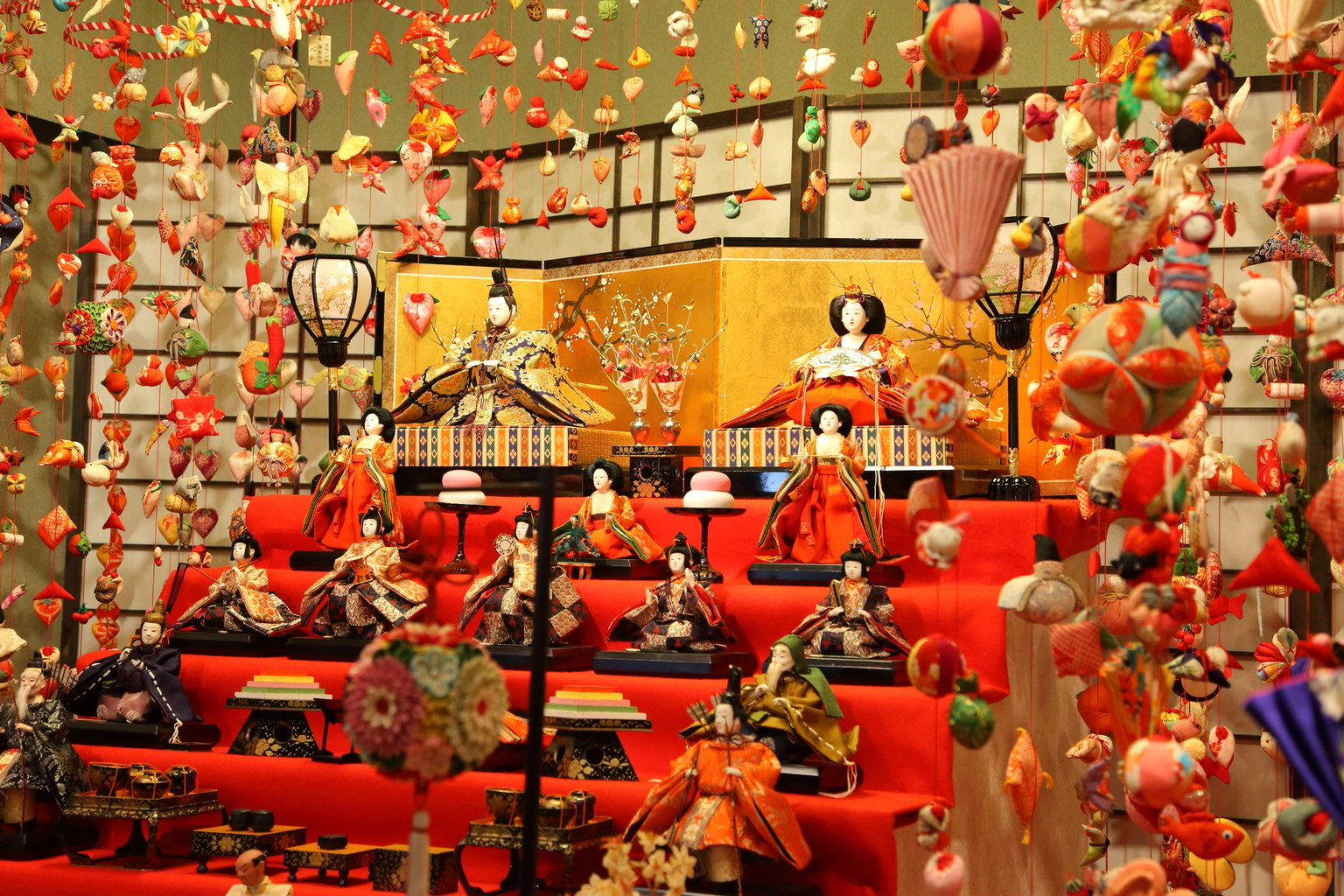 The Hina Matsuri, also known as the Doll’s Festival, began in ancient Japan when people partook in the Chinese custom of transferring the sins of people to ornamental dolls and then setting them afloat down a river: Carried away from the sinner, the sins were thus expiated. In some parts of Japan, some people still celebrate the ancient custom with elaborate origami dolls.

The Awashima Shrine in Kada, Wakayama Prefecture, is a fantastic place to experience the Hina Matsuri. Every year the priests decorate the shrine with hundreds of ceramic dolls, and parents bring their children to the shrine to sing and be blessed. A ceremony follows in which the dolls and flowers are put in a boat and set afloat in the nearby bay. (Due to the vessels getting caught in fishermen’s nets, nowadays they are later towed back to the shrine, and the dolls burned.)

When Japan followed the Lunar Calendar, the festival — which dates back to the Heian Period — coincided with the blooming of the plum blossoms, and still represents the onset of spring. The most common custom of the holiday is the display of hina-ningyo, beautiful dolls that represent the emperor and empress of Japan and the Imperial court,  in the homes of families with daughters.

These are not toys, however: They are ceremonial dolls that are not meant for play and are parts of sets that include items that might be found in the homes of Japanese royalty in former times, such as miniature sake bottles, musical instruments, chests of drawers and even vases for peach and plum blossoms. Often they are collected over a lifetime, from a girl’s first Hina Matsuri, called her Hatzu-Zekku, until the final item is obtained. Such a collection may then be passed from mother to daughter for generations. Families begin to set out their dolls in mid-February, which, because of the extent of the tiers and size of the displays, can take multiple days to construct. Taking down the display, however, is done as close to March 3 as possible: It is said that if a Hina Matsuri display is taken down too long after the day that the family’s daughter will marry late, perhaps not at all — a common superstition that even many a modern parent even is not willing to risk.

Before modern times, Hina Matsuri was the only holiday that celebrated just girls and not boys, and all of the manifestations of the holiday were designed to be beautiful and gentle, representing filial piety and grace. Some families hold elaborate parties where guests enjoy sweets including various types of rice cakes and sweet sake for the adults. However if you have a daughter and decide to celebrate the holiday, the Hina Matsuri is a beautiful way to bless and celebrate the little girls in your life.

The traditional foods for the Hina Matsuri, which are served at the parties families throw to celebrate their daughters, revolve around delicate and beautiful items that can be artfully arranged to evoke the beautiful nature of girls. In the past, this was the only time to have a party that just celebrated girls and not boys as well. Hishimochi are diamond shaped, multi-colored rice cakes. The layers of color each serve a specific purpose: red or pink to chase away evil spirits, white for purity and green for health. There are various symbols for the trio of colors. The shape of the hishimochi symbolizes the heart as families wish for their young girls to grow up in strength and health to be mothers.

Hina-arare are sweet bite-sized rice crackers. Each of the four colors green, pink, yellow and white symbolize the four seasons with green for spring, pink for summer, yellow for autumn and white for winter. With the multicolored rice crackers, you can live happily throughout the year.

Shirozake is sweet white fermented rice wine. This sweet sake symbolizes health and purity for young girls. Parents and grandparents also drink shirozake to celebrate the health of their young daughters. Children usually drink amazake which is sweet sake that has less than 1% of alcohol and looks exactly like shirozake.

Chirashizushi is a celebratory sushi dish that has sashimi and other items such as nori and egg carefully placed over the sushi rice – the meaning of chirashi is “scattered”, but the food is actually positioned carefully, often in a lacquer box. For Hina Matsuri, ingredients such as shrimp, lotus root and beans are added. The shrimp symbolizes a long life until your waist is bent like shrimp, the lotus root for good foresight for your future and beans to be able to work harder and live healthily.

The Set Up of the Hina Dolls

Ningyo and the accessories of Hina Matsuri displays each have a prescribed order on the multi-tiered platforms that can be seen throughout the city and in individual homes. The more elaborate and traditional displays also have various household and celebratory items on them as well as the dolls. The platform is made up of either five or seven tiers, all of which are covered by a red carpeting and the whole display is most often placed in front of a gold-covered screen.

Proper placement is crucial, and the top tier holds only two dolls, representations of the emperor and empress, always with the man to the right of the woman. Many more traditional displays will have a vase for plum blossoms between these two dolls. The second tier has court ladies on it, along with accessories for serving sake. The third tier has all the male court entertainers.

The fourth platform has two minister dolls with a tiny table with rice cakes on it between them. The fifth tier has the samurai dolls, representative of the protection of the court. If there are sixth and seventh tiers, they won’t have dolls on them, but various court items. The sixth tier will have items from inside the imperial court, including a chest of drawers and the items for a tea ceremony. The seventh will be items for use outside the palace, including a palanquin, or an ox-drawn carriage.