As our car traveled alongside Higashiizu’s rugged and besotting ancient coastline, my guide turned to me and explained that this is the sight of the town’s fabled moon road. Known as a power spot – locations where timely visitors can supposedly receive otherworldly or divine energy – this is where the moon road rears its ephemeral head.

For a couple of days either side of the full moon, when standing on the ryokan-shadowed kitakawa path which arcs alongside the Pacific, the moon casts a beam of silvery light along the blackened waters directly towards Higashiizu town. The light forms a beckoning path, seeming almost solid on the still liquid surface, promising something elusive at its end. As local folklore states: if you make a wish in the presence of the moon road, it is destined to come true. This natural marriage of sea and sky typifies what Japan’s ancient culture represented. It was something effusive, elemental, defying concise definition. To find towns and cities in Japan that still honor and cherish such phenomena as the moon road has, unfortunately, become less commonplace. The earth was once revered and respected, never unnecessarily defiled. Today however, priorities appear to have changed.

Modern Japan is now a land of industry, where empires of concrete and steelwork, neon signs and towering facades, dominate the urban aesthetic. It’s the skyscrapers and LED screens of downtown Tokyo that people tend to associate with Japan, and less often its natural delights: the cascading falls and turbulent rivers, the dramatic coastal views, and the hushed forests which envelop the undulating countryside.

After a couple of days in Higashiizu, where the land is still smothered in trees, where waves swell against the (mostly) unhindered coastline of the Izu Peninsula in Shizuoka Prefecture, where ancient crafts are a tangible element of local culture, and where visual wonders like the moon road remain as mystifying and treasured as ever, I longed for Japan to reclaim its natural past.

Where Higashiizu has, first and foremost, preserved Japan’s traditional integrity is in its appearance. Many small towns and cities in modern Japan suffer from a kind of ‘Tokyo Syndrome’, where building upwards and outwards in the direction of some unlikely metropolitan future seems to be the primary goal. The majority of industry in Higashi Izu however still comes from farming and fishing. To that end you’ll find sprawling citrus groves clinging to mountainsides, vast highlands filled with wild herbs, fish markets situated along handsome little harbors and jutting piers, and old family-run restaurants where produce is still farmed locally. Higashiizu is also a geothermal hotspot, and the springs have become a captivating feature of the town. at Izu Atagawa in the center of Higashiizu, under watchtower-like structures, hot spring vents surrounded by toxic-looking mounds of residue billow plumes of superheated steam into the surrounding air. This gives the town the impression of being under siege when viewed from a distance, but is quite striking up close and a fine example of working natural components of the earth into its facade.

The preservation of ancient crafts in a town so small must be also admired. Tatami mat making and hina doll crafting, two art forms in their apparent death throes, still thrive in Higashiizu. Though tatami mat making is on the wane nationwide, the local ryokan – of which there is a plentitude – are keeping these belligerent local artisans in business. One can visit the workshop of master craftsman Tokiwa-san, who works tirelessly protecting the 1,300-year-old tradition. The more that Western styles are adopted across the country however, the more under threat Tokiwa-san and his peers become. The hanging hina doll workshop in the Izu Inatori district showcases one of Japan’s rarer ancient customs. Hanging hina dolls sprung forth in Higashiizu during the annual spring peach blossom festival around 150 years ago. The decorations, made from fabric scraps attached to red strings which dangle from a bamboo ring, were given to newborn daughters as a kind of prayer ritual, asking the gods to grant their daughters a happy and healthy life. A museum and workshop displaying these unusual curios are located in the town.

It is what these local craftsmen and women represent that is maybe their most poignant characteristic. They are a collective Knut attempting to hold back the tides of change, and one can only hope their efforts are not in vain.

Bringing Back the Past

In times gone by, Japanese haiku poets viewed their land as a heavenly gift bestowed upon them by the gods. Now the land of the rising sun has become the land of the rising concrete. To go to Higashiizu, and other like-minded towns, is to view Japan through a lens to its natural past. When you spend most of your days in Japan’s populous urban centers however, it’s easy to forget it ever existed. And as the world enters a new decade where environmental concerns will dominate global discourse, the preservation of our natural surroundings and the traditions and places that honor them seems more pressing than ever. The sword of Damocles may be hanging over the head of Japanese tradition, but thankfully it has yet to fall. 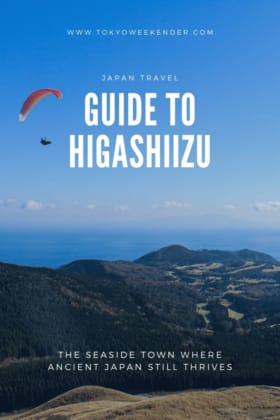