5 Best Prefectures in Japan for Skiing and Snowboarding

As recently as two years ago Japan recorded four of the top 10 spots for world’s snowiest cities. Due to the weather systems that come down the Sea of Japan from Siberia, Honshu’s mountain ranges are blessed with an unbelievable amount of light, fluffy snow. Over the past decade, Japan has developed a solid reputation as a ski destination, with skiers and snowboarders from all over the world coming to experience the wonders of Japow (Japanese powder) for themselves.

In order to find information about these scenic destinations, powder hounds can use the services of Global Mobile, which offers both pocket WiFi and unlimited prepaid SIM cards that can easily help you stay connected anywhere in Japan.

With Global Mobile as your handy sidekick, check out five of Japan’s best prefectures for skiing and snowboarding.

The native Inuit tribe of North America’s Arctic region has 50 words for snow but on Japan’s northernmost island of Hokkaido the locals only need one: Japow. This portmanteau of “Japan” and “powder” has become a calling card for the pristine ski resorts of Hokkaido, which are attracting the attention of more and more international powder hounds every year.

At 1,308 meters, the snow-capped active volcano Mount Niseko Annupuri in Kutchan, Hokkaido, is home to four ski areas operating a total of 30 lifts. Meanwhile, the Hokkaido Powder Belt consists of seven mountains and world-class ski resorts running the length of the prefecture.

By 2030 a bullet train line will end at Kutchan Station, and there are plenty of good reasons to find out why Niseko has been unofficially appointed as the Olympic alpine competition areas in Sapporo’s bid for the 2030 Winter Olympics.

When a city is chosen to play host to the Winter Olympic Games, as Nagano was in 1998, you know you can expect some of the softest powder snow around. Located in the heart of the Chubu region and home to the majestic Northern Japan Alps, the prefecture has long been a must-visit for skiiers and snowboarders from around the world.

From Japan’s largest ski resort at Shiga Kogen and Hakuba Valley to quaint, picturesque ski resorts tucked away in onsen towns (don’t forget the snow monkeys), Nagano Prefecture is at the top of the list of many international skiers and snowboarders coming to Japan.

Niigata Prefecture is where skiing started in Japan in the early 20th century, and the areas in northern Niigata near the coast of the Sea of Japan average more than 5 meters of snow every year.

The town of Yuzawa in Niigata Prefecture is only 70–90 minutes away from Tokyo by bullet train. The tourist-friendly slopes of Yuzawa offer some of the most accessible, and most popular, ski resorts in Japan. You will also find some of the country’s best-kept secrets that are still largely off the international radar, so you can expect short lift lines and uncrowded runs.

Gunma Prefecture is bordered on the north by Nagano and Niigata prefectures. With the Southern Japan Alps sweeping through this pristine area, more than 20 ski resorts offer a nice getaway for snow enthusiasts.

The rustic ski resorts in the Agatsuma area are paradise for hot springs lovers, but can be hard to reach. While the Minakami area attracts the most skiers due to its accessibility, it is still relatively undiscovered by the international crowd. You will most likely need a car to reach Gunma’s ski resorts, and the extra effort is worth it.

Exceeding 2,000 meters in height, the tallest points of the Ou Mountains, Japan’s longest mountain range, are located in Iwate Prefecture. Far off the beaten track, the multiple ski resorts are hard to reach, and small in size. The exclusivity, and peace and quiet to be found on the slopes, make for a lovely reward at the end of the destination.

Along with the solitude, the prices for lift tickets, food and accommodation found in Iwate Prefecture are cheaper than Japan’s more popular ski resorts. On top of that, a relaxing visit to the abundance of local onsen gives you a one-of-a-kind, Japanese cultural experience. 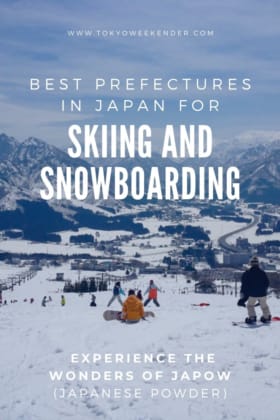