The delicate pastel colors of the cosmos flowers growing en masse are referred to as the sakura of autumn, and like the cherry blossoms in spring, the fleeting beauty of these blooms are undeniably one of the beloved sceneries of fall in Nara.

Perhaps many people are tempted to beeline straight for Nara’s fall foliage, yet from October through early November the teeming colors of the cosmos paint sensational landscapes across the area, certainly deserving the attention alike.

Here are a few lesser known gems of Nara that offer marvelous scenic views of the cosmos flowers that will guarantee to leave you gobsmacked for sure. Established some 1,300 years ago during the Nara period, Hannya-ji is a temple tucked away north of Nara park. Splendid blooms of cosmos flowers cover its entire premises to the extent that it is occasionally referred to as The Cosmos Temple.

The incredible 150,000 blooms of cosmos with over 30 varieties, enliven the spirit of Hannya-ji. The rich history and the sheer beauty of these seasonal blooms are truly an art to aspire.

Access: Admission to Hannya-ji is ¥500 yen. To access Hannya-ji on public transport, board the bus 27, 81, 118 or 153 from JR Nara Station or Kintetsu Nara Station bus stop then get off at Hannya-ji bus stop. Once you are off the bus the temple is just a stone’s throw away. Established in the 7th century by the famous Prince Shotoku, Hokki-ji is hidden away sitting subtlety on the northern side of the world heritage site Horyu-ji. The Buddhist temple is not only about its deep history, but in fact boasts of its epic view of the cosmos.

Hokki-ji’s three-story pagoda is the only original structure remaining, and the barren land located behind this UNESCO World Heritage Site is totally engulfed by incredible blooms of the cosmos. This majestic landscape turns into a perfect backdrop for the profound historical monument and makes it completely snap-worthy.

Unlike all the famous sightseeing sites already known by the world, the backyard of Hokki-ji is quietly tucked away from the eyes of tourists and thus usually scants the crowd. If you are looking for an autumn retreat outside of all the noise, a detour to Hokki-ji is something to keep in mind.

Access: Admission to Hokki-ji is ¥300. To access Hokki-ji by public transport, take the Kintetsu Kashihara Line to Kintetsu Koriyama Station then change to a bus called Hokki-ji keiyu Horyu-ji mae iki bus and get off at Hokki-ji bus stop.

Also, from Oji Station (Nara) change to a bus for Nara and get off at Hokki-ji guchi bus stop and walk approximately 10mins to the temple. Southern Nara is considered the sacred land of emperor Jimmu, the first emperor of Japan whose ascension is traditionally recorded as 660BC. This lesser known area of the prefecture is home to many underrated wonders and otherworldly sceneries, as well as remarkable history and culture.

One of such is the former grounds of the Fujiwara Palace, which served as the capital of Japan from 694-710. The historic remains of the palace, located in Kashihara city, expand across approximately 84 hectares in area. Here you are greeted by extraordinary scenes of seasonal blooms throughout the year. The beautiful sea of cosmos during autumn, it goes without saying, is definitely one of the highlights of Fujiwara Palace, and its splendid landscape is arguably the best of the lot.

Once you set foot in this enormous and wondrous cosmos field, your eyes are treated to countless shades of colors and the sensational view of this place will surely keep you spellbound.

Access: Admission to the former site of Fujiwara Palace is free of charge. To access by public transport, catch the train from Kintetsu Nara Station to Yamato Yagi Station then change to a community bus and get off at Fujiwara kyo Shiryoshitsu mae bus stop.

You can also board the JR Line to Unebi Station or board the Kintetsu Line to Miminashi Station or Unebi Goryo Mae Station, then walk about 30 mins to the venue. 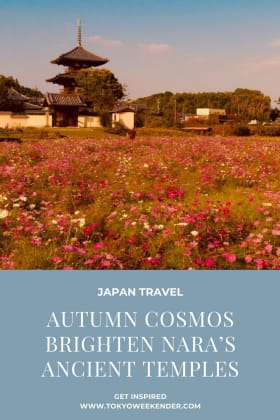