The lesser-known neighbor of Okinawa, the Amami archipelago is situated at Kyushu’s southernmost point and comprised of five main islands, plus several smaller ones. A trip here offers rich cultural exploration, cutting-edge architecture, luscious tropical fruits and seafood – and perhaps some of the most stunning natural vistas of your life.

Following on from TW’s exploration of all five islands earlier this year, we headed back for a more in-depth look at some of the unique contemporary accommodation options and cultural attractions of this extraordinary part of Japan. 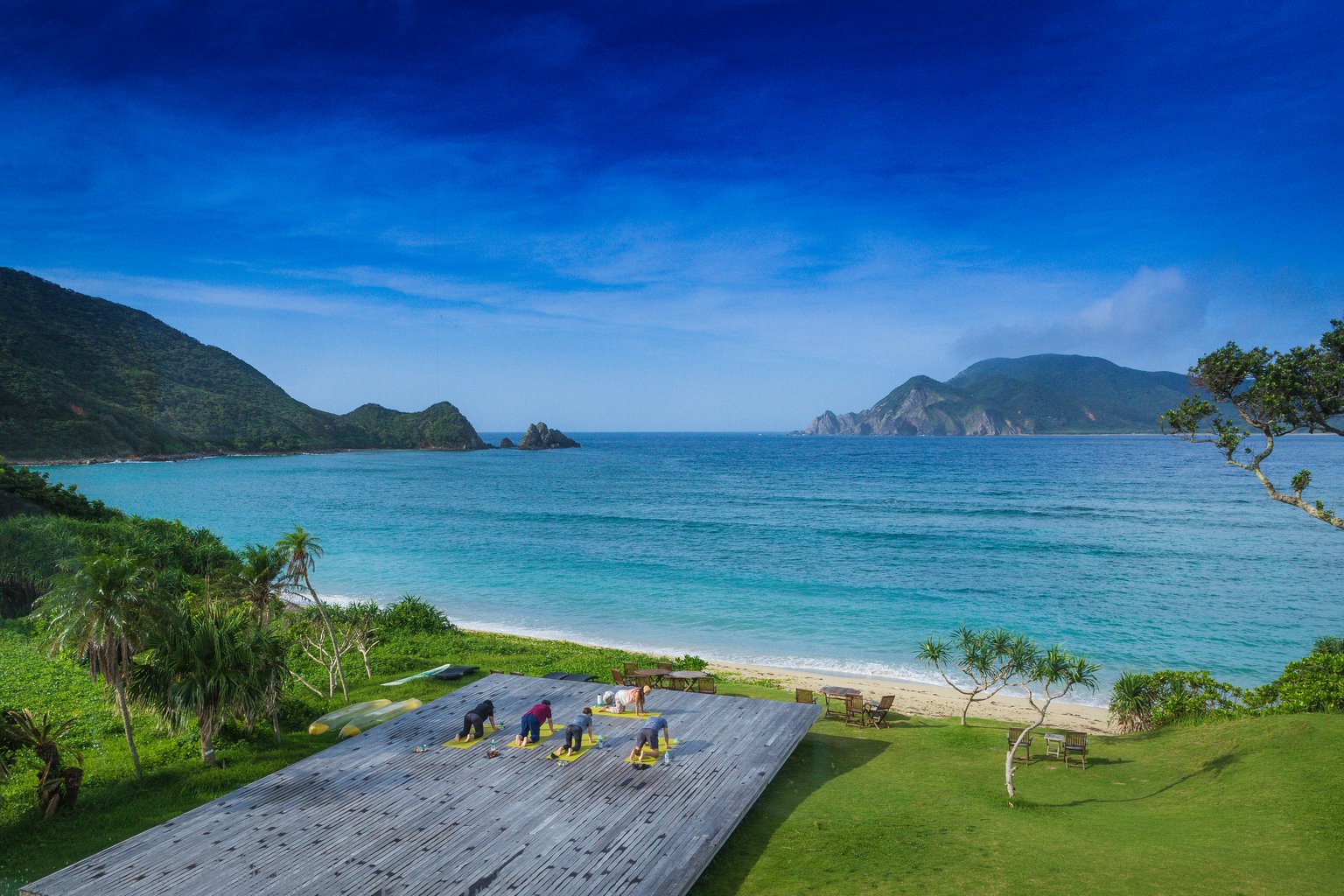 Yoga at The Scene hotel

On Amami Oshima, the largest island in the chain, we stayed at The Scene resort hotel and spa, which is secluded at the edge of the finger-like peninsula jutting out from the island’s southeastern tip.

In addition to oceanfront vistas, the hotel incorporates appreciation of nature into its services at every level. Unique offerings include a spacious wooden beachfront deck where yoga sessions are held at sunrise, and again after dark via candlelight; and where you may enjoy a massage or other spa treatment. The friendly hotel staff lead snorkeling boat tours in the gorgeous surrounding waters (which are, incidentally, where pufferfish were recently discovered to be creating spectacular underwater mystery circles on the ocean floor). Or, set off with a snorkel set or a clear kayak for your own exploration. We dined on elegant specialties such as sweet Satsuma shrimp atop a bed of chilled capellini; lusciously soft, subtly crisped premium-grade Kagoshima kurogyu (black beef); and an array of local dishes including an enormous steamed oyster and ayu (sweetfish) tempura with exquisitely arranged accents including passionfruit and local sea salt.

During after-dinner drinks on the rooftop deck, which transforms at dusk into an atmospheric bar, we witnessed one of the region’s most otherworldly phenomena: dramatic views of the Milky Way. The pitch-black sky was streaked with such ethereal light and scattered with so many stars that we could not believe this was the same cobalt blue sky we were gazing at just hours earlier. Just under two hours’ drive away, hugging the island’s northwestern coast, lies an innovative company known as Denpaku (an amalgam of “tradition” and “accommodation”) headed by internationally lauded architect and Amami Oshima native Yasuhiro Yamashita. Concerned by the growing problem of abandoned homes around the islands, Yamashita and his team began converting select structures into stylish inns. The company now operates 20 properties on three different Amami islands for travelers of all budget levels, and pIans are in the works for expansion to other neighboring islands.

The Beachfront Mijora, Denpaku’s newest property, features 13 architecturally stunning beachfront cottages with minimalist concrete frames (perfect for protecting against typhoons), accented by rattan furniture, swinging hammocks, and luxurious amenities. Speaking from the Mijora just after its grand opening, Yamashita told us that his concept involves a fusion of zen, art and nature, and was inspired by projects happening in cutting-edge cities such as San Sebastian in Spain and Portland in America.

He explained that one of Denpaku’s major goals is encouraging interactions between residents and visitors. In addition to a café/restaurant and a market specializing in local products, the Denpaku Hotel houses a multi-purpose area serving as a community gathering space. Nearby, the Denpaku Takakura features a traditional thatched roof where guests are invited to participate in local gatherings. We attended a summer festival where neighbors enthusiastically taught us phrases in the Amami dialect, and invited us to join in their joyful dances and drinking games. Another goal, revealed Yamashita, is protecting the region’s cultural and spiritual customs. In addition to closely aligning with the lunar calendar and the cycles of nature, one unique local tradition is the practice of female spiritual leaders. Rooted in the religious traditions of the Ryukyu Kingdom, these leaders historically included two types: noro (village priestesses who were related to male bureaucratic administrators and were worshipped as royalty), and yuta (everyday individuals who became shamans after experiencing some type of divine awakening).

While the noro system has mostly ended, yuta continue to practice both in Okinawa and Amami. We were fortunate to be able to secure an appointment with one of these leaders at her home. The fascinating experience began by providing the shaman with an offering of salt and kokuto shochu (the local distilled spirit made from brown sugar). She then chanted Buddhist sutras at her altar before invoking a litany of Shinto shrines and gods – evidence of the complexly intertwined local spiritual traditions. And then, knowing nothing other than my birthdate, she proceeded to describe my character and offer pointed life advice with such shocking accuracy that I felt she was peering directly into my soul.

Most yuta do not advertise their services openly – the idea being that if you are meant to find them, it will happen. Does it get more spiritual than that?

We next visited the island of Kakeromajima, around a 30-minute ferry ride south of Amami Oshima, which once had a flourishing culture of noro priestesses. The island is also the birthplace of Ikue Asazaki, known as the godmother of shimauta (folk songs from the Amami Islands), whose haunting, ethereal style has brought her solid fame both domestically and overseas. See her in the cinematically breathtaking, historically fascinating film Songs of God, where she appears as a noro. Our last stop was the entrancing island of Yoron, which is situated at Kyushu’s southernmost point. Its deep blue skies, rustling sugarcane stalks and hibiscus flowers are not unlike the other Amami islands, but something about tiny Yoron just feels different.

An eki (train station) sign sitting along a quiet road announces the island as the stop between Kagoshima and Okinawa (which, just for perspective, are 20 hours and three hours away by ferry, respectively). Another sign reads: “In the near future, we dream of having a railway. Please buy a ticket from us at that time. Until then, you can take the meteor from Yoron Station on the Milky Way main line. Please enjoy the starry sky on your journey through the heavens.”

And this is exactly where you will feel you have traveled when viewing one of the island’s dramatic sunsets, when exquisite multi-layered cloud formations texture the skyscape, making you feel like a miniscule speck in the universe.

The particular sunset we enjoyed felt all the more otherworldly because we were viewing it from a terrace at a Mediterranean restaurant at the beachfront Pricia Resort, which is styled after Mykonos, Greece – Yoron’s sister island. For those staying the night, the resort also offers cottages with private jacuzzis and an onsite spa. Heading out to explore the island the next morning, we stumbled upon the delightful Kujira Café, located one mini-peninsula over from Pricia. Its intriguing menu includes homemade “shima ‘ffins” (a clever wordplay on “island muffins”) baked lovingly with fresh island tropical fruits and herbs. Kujira is run by a lovely couple who relocated to Yoron from Honshu, and who also rent out sea kayaks just below the café. That afternoon we visited Yurigahama, a sandbar off the island’s eastern coast that appears to be a floating beach. We learned that this phenomenon is only visible at low tide during the full and new moon, so we weren’t able to see it (be sure to check the lunar calendar before traveling). We were still able to enjoy the gorgeously clear turquoise waters, however, and even glimpsed an enormous sea turtle swimming underneath our glass-bottomed boat.

Later we headed to Yoron Folk Village where the friendly owner explained that the village was founded by her mother-in-law, Chiyo Kiku, now 92 years old, when the island’s traditional way of life was threatened after modern conveniences were introduced to the island during the 1960s and 1970s. Kiku authored a dictionary to help preserve the endangered Yoron language (yunnu futuba) and the village now holds workshops on everything from kokuto (brown sugar)-making to crafts using local natural materials.

Before leaving Yoron the next morning, we grabbed a coffee from the stylish Meedafu’s Yui, and then boarded our ferry for the eight-hour return to Amami Oshima. As if to bid us farewell, pods of flying fish and dolphins frolicked nearby in the deep ice-blue water – one final sign from the universe that there’s a certain kind of magic at play around these fascinating islands.

Amami Weather: Need to Know Before You Go

The Amami Islands see high rainfall and are hit by strong typhoons that usually occur late summer through autumn. Check the weather forecast before you go, although this too may be changeable. When visiting in summer, the heat can be overpowering. Be sure to hydrate constantly, and don’t forget your sunscreen!