Connected to Tokyo by the Hokuriku Shinkansen since 2015, it’s never been easier to visit Kanazawa, a longtime hub of traditional culture and samurai history. It only takes 2.5 hours to get there and its compact size makes it easy to get around — perfect for a quick weekend stay.

Kanazawa, literally “gold marsh,” earned its name after a farmer found gold dust in a marsh in the area — or so the story goes. Regardless of the origins of its name, Kanazawa is Japan’s undisputed gold leaf capital and produces 99% of the nation’s gold leaf — including the gold used to cover Kyoto’s famous Kinkakuji. The city is also Japan’s number one purveyor of silver and platinum leaf, boasting 100% of domestic production. Gold leaf production dates back over 400 years in the region, aided in part by Kanazawa’s high humidity and abundant rainfall. Because even the smallest amount of static electricity can tear the thin, delicate sheets — measuring 0.1 to 0.125 micrometers thick — and damage them beyond repair. Visitors curious to know more about this fascinating product should stop by the Kanazawa Yasue Gold Leaf Museum located near the Higashi Chaya district. Kanazawa was extremely prosperous during the Edo Period because of its abundant rice production. Its riches, combined with the innovation of Kaga clan leaders, created an environment devoted to beautiful things in the form of crafts, food and cultural entertainment. Even today people visit Kanazawa to sample the area’s unique Kaga cuisine, its many different decorative arts and explore its geisha districts.

One of Kanazawa’s most famous historical entertainment districts, Higashi Chayagai and its wooden houses with lattice windows is a must-see. Drop by early to avoid the masses of tourists that take over later in the day and enjoy this seemingly sleepy part of town. Rows of low two-story houses line the streets, hiding geisha teahouses (two of which you can visit during the day — Shima and Kaikaro), cafés and souvenir shops galore. Like many other areas in the city, Higashi Chayagai was spared large-scale fire disasters and WWII bombings, making it one of the best-preserved historic districts in Japan. Visit in spring to catch a glimpse of swallows nesting above shop doorways, flitting in and out of the eaves to gather food for their young. If you’re feeling peckish, head to Hakuza for a decadent morning snack of gold leaf-covered soft serve ice cream, or simply peruse their vast selection of gold leaf accessories and cosmetics. Visit again in the evening for another perspective on this popular entertainment district and a bite to eat.

Higashi Chayagai is only one of three historical entertainment districts. Although it’s the largest, it’s also the most crowded. Visit Nishi Chayagai in the west or Kazuemachi across the river to the south. The Nishi Chaya District is smaller, consisting of only one main street, but houses a geisha training school where passersby can hear young women practice their dancing and singing during the day. Kazuemachi is also small, but has winding alleyways and is no less delightful than its larger counterpart, Higashi Chaya. 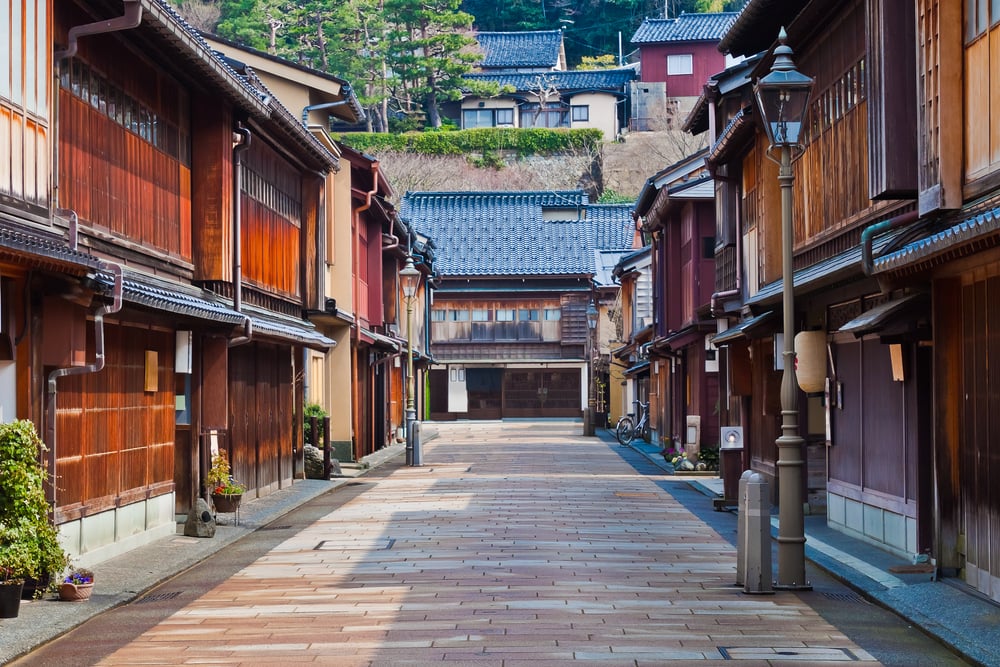 11am — Tea Ceremony at Gyokusen-en

Just a stone’s throw away from the vast Kenroku-en lies the smaller Nishida family landscape garden, Gyokusen-en. Naokata Wakita, a Korean-born Kaga clan chamberlain, started its construction in the early Edo period, but it wasn’t deemed finished until about 100 years later when 4th generation descendent Kuhita Wakita made the final touches. The garden spans over two levels. A steep slope leads to a teahouse, which is a replica of the Ka-un-tei tea room of the Urasenke school in Kyoto. Here, you can experience a traditional tea ceremony available only two times a day, at 11am and 2pm. The tea ceremony is performed in English, and offers insight into the importance of tea gardens to the mindset needed for tea ceremony. Book well in advance. The tea ceremony experience takes about 30 minutes, but leave ample time to stroll around the garden both before and after to make the most of this unique space. Purported to be one of Japan’s three most beautiful gardens, Kenroku-en is a strolling garden on a massive scale with many unique features, including Japan’s oldest water fountain. It had humble beginnings, starting out as a terraced accent garden across from Kanazawa Castle and was originally known as Renchi-teien. The garden was a pet project of the 5th Kaga clan leader, Tsunanori Maeda, and the garden grew in scale and elaborate design with each successor until Japan’s feudal era ended in the mid-1800s. In accordance with the change in times and regime, Kenroku-en, previously the playground of feudal lords and their peers, was opened to the public in 1874.

There are several small teahouses and restaurants to choose from for lunch, serving local specialties ranging from light snacks to full set courses. 3pm — Expand Your Mind at a Museum

Being a hub of culture and class since the Edo period, Kanazawa continues the tradition into the modern age with several museums and art galleries across the city. Explore modern art at the 21st Century Museum of Contemporary Art, Kanazawa, and discover more about Ishikawa Prefecture’s 36 designated traditional crafts at Ishikawa Prefectural Museum of Arts and Crafts. At Kanazawa Phonograph Musem you can find vintage gramophones and there are even daily demonstrations displaying the excellent sound quality of these antiques. For a more spiritual experience, head to the DT Suzuki Museum, dedicated to the Buddhist philosopher Daisetz Suzuki, who is often credited with spreading the understanding of Zen Buddhism to the West.

6pm — Wind Down in Style

If you’re planning a trip in late spring or autumn or over the New Year, make reservations at Kaikaro in the Higashi Chaya District for a unique opportunity to experience a sumptuous banquet dinner and geisha performance. If you can’t time it right, Shogyotei is famous for its exquisite seafood multi-course meals, serving the finest the Sea of Japan has to offer, as well as a stunning view over Kanazawa. For something a little simpler, try Syusui Daigo, which offers an extensive selection of local sake and shochu to go with your meal.

Stay at UAN Kanazawa, a hotel that seamlessly blends tradition and contemporary Kanazawa style. Tucked away behind Kanazawa Castle, it’s conveniently located in the center of the city, just a stone’s throw away from Omicho Market and a 5-minute walk to Kanazawa Station. Kanazawa wouldn’t be what it is today without its feudal past. The Nagamachi Samurai District and the Utatsuyama Temple area are two spots that bring that history to life.

It wouldn’t be a real visit to Kanazawa without a wander around the Nagamachi Samurai District. Since the Kaga clan was so prosperous during the Edo period, the houses of both upper and lower class samurai were of significant size and structure compared with their counterparts in other areas of Japan. Many houses have been restored and the narrow alleyways remain, giving this area a timeless feel. There are some lovely cafés and craft shops in the area, but the main draws are the museums showcasing life for low- to middle-class samurai in the area. The Kanazawa City Ashigaru Museum has free entry and shows how Edo-period foot soldiers lived. The fact that these are freestanding houses and not nagaya (long rows of houses) shows how well off Kanazawa low ranking samurai were compared to other regions. The houses are simple and in stark contrast to the Nomura Samurai Residence, which is also open to visitors for a small fee. For the craft-inclined, nearby Kaga Yuzen Kan offers workshops in yuzen dyeing, a method used to paint kimono designs by hand. 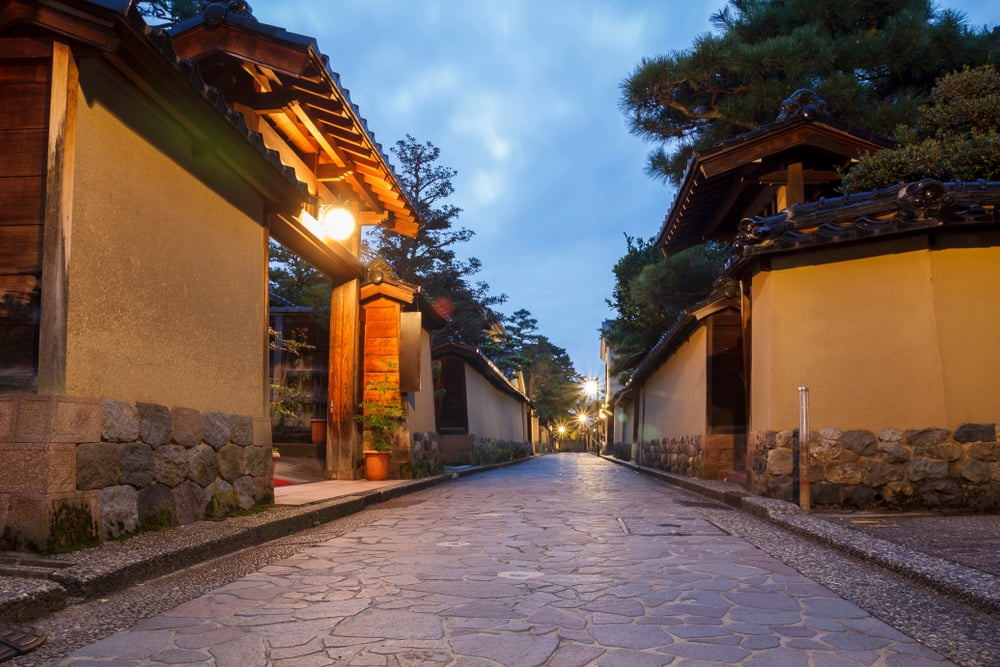 Kanazawa’s proximity to the coast of the Japan Sea makes it the ideal go-to spot for fresh seafood. At Omicho Market — fondly referred to as Kanazawa’s Kitchen because of its impressive selection of stalls, restaurants and shops — you can sample some of the best the ocean has to offer. The market has been in business since the 1700s and boasts almost 200 stores on its three floors, selling everything from Kaga vegetables to sushi, seaweed and even clothing. Shop fresh delicacies at any of the stores and enjoy it on-site in the dining area on the basement floor, or head to one of the many restaurants that buy their produce directly from the stalls in the market for a feast you won’t forget any time soon. Note that store and restaurant opening times vary, so make sure to confirm in advance if there’s a particular place you want to check out. If you’d rather make your own lunch, head to Higashi Chaya for a sushi-making experience at Kanazawa Sushi. 2pm — Go on a Spiritual Journey in Utatsuyama

Another of Kanazawa’s well-preserved districts is the Utatsuyama area, which houses over 50 temples and a few shrines. It’s a quiet place to contemplate as you wander, with a number of different courses to follow. The shortest takes about 90 minutes and takes you past 12 temples. The temples are clustered together here — and in the areas of Kodatsuno and Teramachi — because lord Toshitsune Maeda of the Kaga clan ousted them from the main castle area. This was in part to control the temples, which had enjoyed more power than the samurai were comfortable with, as well as to prevent riots from the Buddhist Ikko sect.

5pm — Grab a Bite For the Trip Home

Before heading back to Tokyo, explore Kanazawa Station’s Hyakubangai shopping area for some local specialties, souvenirs and a bite to have on the way home. Hyakubangai is split into three parts — Rinto, Anto and Kutsurogikan — and has an almost overwhelming selection of locally made crafts, mouthwatering bento and more. It’s a great one-stop-shop for last-minute gifts as well as the perfect spot to buy high-quality fare to enjoy on your Shinkansen ride home, making sure your Kanazawa experience doesn’t end quite just yet.

Getting Around in Kanazawa

JR Pass holders can take the JR Buses around the city for free, but note they have irregular departure times later in the day. The Kanazawa Loop Bus is the best way to get around the city and costs ¥200 per ride for adults, or buy a one-day pass for ¥500 to hop on and off all day. It goes to all the main areas and has services going in opposite directions so if you want to backtrack to another area it doesn’t eat up too much time.