Walking Tohoku: A 614km Journey on the Michinoku Shiokaze Trail

On July 12, a young man named Robin Lewis shouldered a 25kg backpack and began walking. Setting off from Hachinohe in Aomori Prefecture, he would make his way through Iwate and Miyagi Prefectures, and finally stop on August 8, after 28 days, 896,420 steps and 614 kilometers, at the city of Soma, in Fukushima Prefecture. He became one of the first people to walk the entire length of the newly opened Michinoku Shiokaze Trail, and along the way, he would experience the beauty of Tohoku’s natural surroundings as well as the resilience, kindness, and generosity of its people.

Lewis, who works with Peace Boat and the Ecoship Project, took a three-month break from his work to make the trip happen, and has documented his journey through the Explore Tohoku project. We caught up with him recently to hear more about what inspired him to take his journey and what he learned about the people of Japan’s northern prefectures.

What was it that first inspired you to begin your walking tour?

On March 11, 2011, I was in Scotland, where I was finishing my studies at the University of Edinburgh. That morning, I was woken up by a panicked phone call from Tokyo, where my family was based.

I immediately switched on the news, and, along with the rest of the world, watched the horrific footage of the earthquake, tsunami and nuclear disaster unfold. A few weeks later I was on a plane back to Tokyo, concerned about my family and driven by an urge to help. Being half Japanese (my mother’s family has roots in Tohoku), I wanted to contribute to the relief efforts in one way or another, despite my lack of skills and experience.

From April to August 2011, I volunteered in shelters, helped to distribute supplies, cleared debris from damaged homes, and interpreted for relief teams in Fukushima, Iwate and Miyagi prefectures with a range of organizations.

At the end of that summer, I took up a job in the private sector in Tokyo, but was deeply affected and moved by my experiences in Tohoku. After a year, I decided to follow my instincts and quit that job in the pursuit of more “meaningful” work. I ended up back in the humanitarian sector, where I landed a full-time job in disaster relief. From 2012 to the present day, I have been working both in Tohoku and around the world on disaster response, recovery and prevention projects.

How did you secure the funding to make the trip happen?

I spent hours researching sources of funding before my trip. I churned out several project proposals, sending them to companies, expedition funds, and foundations. Although many of these were rejected, I was fortunate enough to secure grant funding from two generous donors – Japan Foundation Asia Center and the Next Challenge – who have been instrumental in making this project happen.

What were some of the most memorable experiences that you had while on your journey?

Tohoku has some truly stunning scenery – it is an outdoor enthusiast’s paradise, and one of Japan’s best kept secrets. Some of the views were like none I’d ever seen in Japan. For example, the Tanesashi Kaigan, a stretch of Aomori’s pristine coastline, dotted with jaw-dropping vistas of beaches, bays, and inlets. Then there are the dramatic cliffs of Kitayamazaki in Iwate Prefecture – 200-meter cliffs shaped by wind and water over thousands of years – which are undoubtedly among the highlights of the Sanriku Recovery National Park. I also loved spending time on the island of Kessenuma Oshima in Miyagi Prefecture, a perfect spot for camping during the warmer months and with some wonderful walks on offer. And the best things about these places? There are generally very few tourists compared to other parts of Japan. Over the course of my month-long walk, I only encountered a handful of other hikers following the Michinoku Coastal Trail (maybe no one else is crazy enough to attempt the trail at the peak of summer…). That being said, the thing that stuck with me most from the walk was undoubtedly the people I met. Ever since my first visit to Tohoku in 2011 I have always been told that the people there are shy, reserved, and like to keep to themselves.

I found the exact opposite. The number of times people went out of their way to help me was just staggering. One of my favorite encounters happened when I was sitting outside a public bath house, about to pitch my tent and sleep. I suddenly got a tap on the shoulder, and was greeted by two elderly sisters: “Where are you heading?” I explained my story and said (with a smile) “I’m sleeping here tonight, in my tent.”

The two looked at each other and, almost immediately, said, “We have plenty of space at home, so you can sleep in our spare room … Our house isn’t much to look at, but it’ll be better than sleeping here.” After a few attempts to reassure them that I was OK and didn’t want to be a burden, they insisted, and so off we went, the three of us, to their family home.

We sat around the dining table in a beautiful, traditional Japanese tatami room, eating rice crackers and drinking tea, laughing. We spent hours talking about everything from politics to romance. As the night was winding down, I asked: “Why did you come and talk to me? You didn’t have to, but you went out of your way to help me out.”

After a brief pause, one of the women said, “The tsunami took away so much from us. We lost family, and our house was washed away … it was a time of extreme hardship, grief, and sadness. In the weeks, months and years that followed, so many people from outside the area came to help us. People who had never been to our town were working alongside us to rebuild it – complete strangers … Now, we’re doing our best to move on. My grandchild recently moved from here to the US, and she tells me all of these stories about people helping her settle in: her host family, college friends, and even strangers. My family has been on the receiving end of so much kindness and generosity, many times from people we don’t know. So I think it’s important to pay it forward.” What have been the biggest lessons that you’ve taken away from your experience?

Firstly, my journey through Tohoku reinforced one of my long-held beliefs – that the majority of people are inherently good. I could not believe the number of times people would offer a helping hand to a complete stranger, especially a male, solo, foreign-looking traveler walking around with a 25kg backpack. It totally surpassed all my expectations. Secondly, my journey taught me that everyone has a story to tell. And in the case of Tohoku, people have stories of tragedy, loss, and pain. But they also have stories of overcoming adversity, of resilience, and of hope. 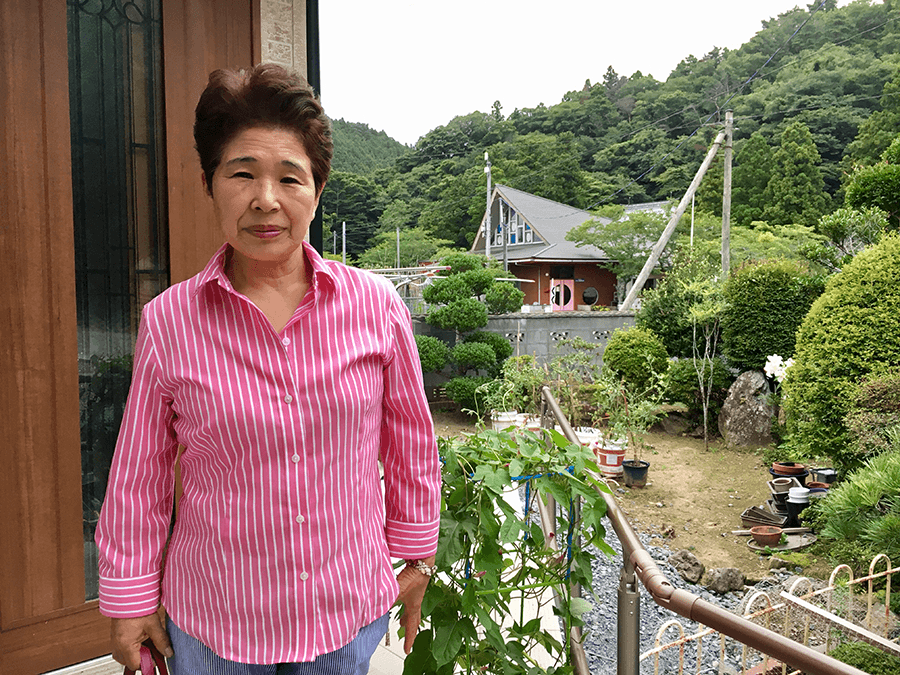 Six years since the earthquake, people are – of course – still feeling the pain. But what was truly inspiring was to hear stories of people who have been through such hardship and are able to build back even better than before.

One encounter that encompassed this was when I took a wrong turn and ended up coming across a tiny café on top of a hill in Iwate. While I stood there with my map in hand looking lost, I was greeted by a fisherman and his wife, who took me in and treated me to some fresh hoya (sea squirt), coffee, and homemade chiffon cake. I spent a few hours there chatting with them about their experiences: how they lost their home and had to rebuild on high ground far away from the ocean; how the fisherman was applying new technologies to his hoya cultivation to boost yields; and how the community has become stronger since the tsunami happened. As I finished my cake and prepared to leave (night was falling, and I still had to find a place to pitch my tent), the fisherman said something to me that I won’t forget. He said: “The tsunami was a tragedy, no question about that. But six years have passed, and I can now say that because of the disaster, we were able to dream new dreams. My wife always wanted to open her own cafe. Now look – we have our own café! I always wanted to expand my business. Now my business is taking on a whole new direction that I couldn’t have imagined before. Despite everything that we’ve been through, it provided an opportunity to start afresh, to achieve new heights. It gave us an opportunity to build back even better than before.” What has the continuing response been like for your project?

I’ve been really pleased at how the project has been received in so far. I’ve had some media coverage and received dozens of messages from people wanting to know more about visiting Tohoku and about the newly opened Michinoku Shiokaze Trail. This was a great result, as one of the aims of this project was to promote tourism to the area and raise Tohoku’s profile.

People also seem to be enjoying my interviews with survivors (many of which I still have to write up…). Since Tohoku is a relatively unknown destination for many people outside Japan (apparently, fewer than 1 percent of inbound tourists go there), I think people enjoy hearing about a different side of Japan. Also, given that there is limited news coverage about Tohoku these days (especially in English), I think it is particularly important to continue this conversation, and share lessons learnt and stories from the region.