Future Islands on Musical Catharsis and Finding Truth in Songwriting

“I’ll take all of that you got. That was wonderful!” exclaimed legendary host David Letterman after synthpop band Future Islands made its breakthrough performance on The Late Show in 2014. The Baltimore troupe wowed Letterman and went on to break the internet thanks to frontman Samuel T. Herring’s enthused dance moves and dynamic vocals during the performance of their song “Seasons,” from their 2014 album Singles, which fans quickly turned into a range of viral memes.

Before long, throngs of new devotees came pouring into Future Islands’ shows, and the trio went from an indie cult act to selling out theaters. They had enough momentum to practically tour nonstop throughout the rest of that year and well into 2016, which left the band feeling both triumphant but then, before long, exhausted and overwhelmed. Those feelings are reflected on their follow up LP The Far Field, which they released this past spring. Songs like “Through the Roses” reflect Herring’s struggles with depression and even suicidal thoughts. Ahead of the band’s December 19 performance at WWW X in Shibuya, Herring, keyboardist Gerrit Welmers and bassist and guitarist William Cashion tell us about the whirlwind post-Letterman breakthrough.

What was it like to work on The Far Field after Singles? Was there pressure and new opportunities?
William Cashion: The thing is we always put a lot of pressure on ourselves. So knowing we had a longer audience played a part in that, to some extent. Because Singles did so well, we were able to go to Sunset Sound in Hollywood for The Far Field, but we wanted to make sure we were still making a Future Islands record, without changing too much as a band.

Oh that’s amazing – Prince’s Purple Rain, the Rolling Stones’ Exile on Main St., the Beach Boys’ Pet Sounds, and a bunch of other classics were all recorded there, right? What was it like to work in a place that had such a storied legacy?
Samuel Herring: It was a beautiful studio and everyone there was really kind to us. It was good to have four weeks there. We played a lot of basketball, because there’s a court in their main courtyard. It was a great way to blow off steam. We made a lot of trick shots off the walls! And of course just hearing about the history of the place was amazing, and to feel like a part of it.

The sound in there was incredible as well. But even though we’ve been making music for so long, studios are still a bit intimidating. Maybe a bit less this time around, we’re starting to get more comfortable.

Why is it intimidating?
Samuel Herring: Well, we came up making records in the living rooms of our houses. To us there’s a comfort in that. A studio’s purpose is to control sound, after all. And with our early records there was something special with having the creaks in the rooms we recorded in. Being in an actual lived in home adds a certain quality that is lacking in a studio. But being in Sunset added a certain warmth.

So would you rather record somewhere more low key next time?
Samuel Herring: I dunno. I definitely want to go back home, I think. We had reservations about recording in Los Angeles. We didn’t want the album to sound like we had sunglasses on and got really cool all of a sudden (laughs).

But we kept in mind that all the songs were written in Baltimore and North Carolina, so being in LA wouldn’t taint things too much. I just miss the east coast though, we’re such an east coast band, and I want to be back in the leaves and the trees of Baltimore, and record there again next time. I think Sunset was great as far as the sound of the record, it was a great experience recording there, but I also think we don’t need to do it. It’s just one of those things you think about when you think back, and consider what you’ve sacrificed. I’m not trying to disrespect the record or anything, but it’s just one of those things where you’re trying a lot of stuff out to see what sticks. 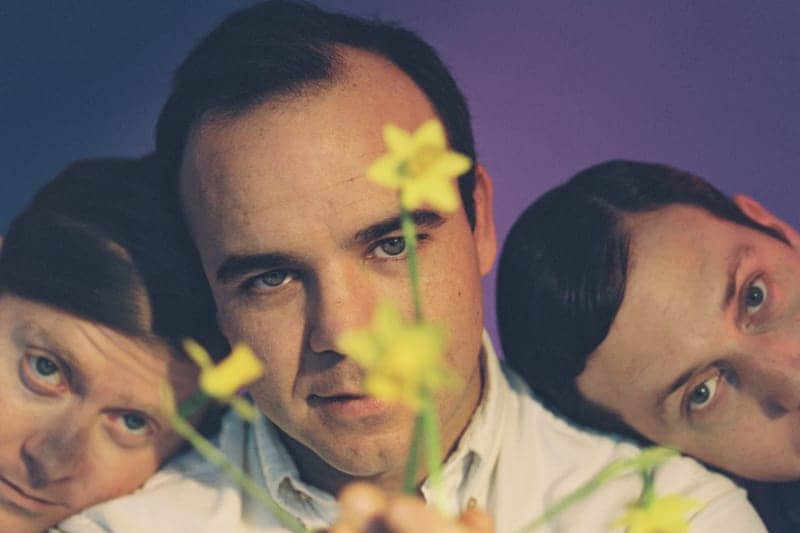 Can you guys tell me about any new influences that might have affected this album?
William Cashion: I think part of the way we write songs is listening to very different kinds of music. We overlap in many ways, like we all seem to enjoy Brian Eno’s ambient stuff. Or old Krautrock, Kraftwerk is a big one for us. But there weren’t any records we were talking about while writing The Far Field. We were really into the Japanese experimental act Mariah’s record Utakata no Hibi from the 80s. We found out about it while at a record shop called The True Vine in Baltimore. The guy who runs the record store played it for me, I’d never heard it before, and I think Gerrit and I were really into it.

Gerrit Welmers: Yeah, but I don’t think there was anything in particular that we were listening to that affected the direction of this album. I do, however, remember watching a horror movie almost every night while recording this record. So that probably has something to do with the overall vibe. Whether or not it was a good one or a cheesy one, we’d watch a horror movie each night. And I don’t often watch scary movies, some of them actually really got to me!

Samuel Herring: I got really scared a few times too.

Which movies freaked you guys out the most?
Samuel Herring: There was this crazy one we watched called The Wailing. It was a crazy Korean film. It had this strain of silliness while also being completely insane. I highly recommend it. And there was another called The Visit, which was uh…

Samuel Herring: Yeah! This M. Night Shyamalan movie, which was also hilarious and terrifying, and also I found to be really good.

Well that sounds fun. One thing that sounds equally intense: I’ve read in New York Times, and in other articles about Future Islands leading up to The Far Field that, Sam, you didn’t have any dance moves worked out for these new songs, especially compared to the routines you had made for Singles’ songs.
Samuel Herring: I’ve got some stuff now, some beauty moves (laughs). But nothing too much. I’ve actually realized on this tour that the reason why the dance became something was because let a lot more space into my lines on Singles. And I think The Far Field is more poetic, and kind of narrative and story driven, while Singles just had these little aphorisms. Because of that, there was space between the lines, where I had to figure out what the hell to do when I wasn’t singing something.

So while performing a lot of The Far Field, the lines flow together in more poetic ways. There’s this different spacing, the lines just keep going and going, and that is affecting my performances for sure. But I didn’t realize all that until after the fact. Speaking of lyrics, The Far Field song “Through the Roses” is one that really stands out as heart-wrenching and moving. Have you had feedback from fans who felt catharsis through that song?
Samuel Herring: I mean, I think that’s one of the reasons why we tour as hard as we do, and continue to push ourselves. I’ve felt that way since In Evening Air, our third record. It was the first time the three of us had written expressly together, and a lot of it was about our big move to Baltimore from North Carolina, to go after this big dream of becoming musicians and making touring our lives. We were dealing with being homesick, and realized we were in a shaky zone. We were broke, oh so broke, and going after this thing. So these cohesive personal songs came from that, and I found people really responding to our work in this way.

That’s when we realized what our strengths are, mainly truth in songwriting. If we think it’s beautiful and real, that becomes something people will take heart in. It pushed us to be there in our songwriting and continue to uncover these things.

So with Singles, people might think hits like “Seasons” are the ones that get the biggest response. But I actually heard more about “Light House,” which is a song that deals with feelings of suicide. Because the people that needed that song connected with it immediately, and I think the song “Through the Roses” is in the same vein. I know that when I share my feelings and fears, it helps people through hard times. I’ve found that out through people approaching us after shows or sharing that in emails to us. So you want to continue to bear and share those feelings, so you can continue to give those people some hope or something to hold on to. So that they don’t feel like they’re alone.

Future Islands will be playing Shibuya WWW X on Tuesday, December 19. For more information, visit our event listing. The band will also hold a special signing event at Tower Records on Monday, December 18.