One hundred and twenty years in the newspaper business means a lot of headlines.

That’s one lesson that can be taken from The Japan Times’s 120th anniversary exhibit – “Japan Through the Lens of an English-Language Newspaper – 120 Years of the Japan Times” which opened earlier this month at the Japan Newspaper Museum in Yokohama. There is also plenty more to be learned from this small exhibit, which is made up of more than 120 reprints and original newspapers, which date back to the paper’s founding in 1897.

The exhibit is organized by era and by theme. The historical material dates back to the Taisho era and the paper’s very first front page and moves all the way up to the present day. This section makes up the bulk of the exhibit, and also is the most interesting reading, featuring events of national and worldwide importance splashed across the headlines.

While some of this news was coming from overseas, The Japan Times often found itself on the cusp of breaking domestic stories. One case of this was the Siemens scandal of 1914, when it was revealed that Japanese naval officials were receiving kickbacks from the German industrial firm, Siemens AG. The Japan Times was one of the first English language newspapers to print news about the incident, which would eventually lead to the resignation of Prime Minister Gonbee Yamamoto. As much as the headlines make for interesting reading, time spent reading farther down the page can be just as fascinating, offering small details that shed light on daily life over the decades in Japan. But all of this pales in comparison to the exhibition’s most fascinating section: reprints of The Japan Times during World War II. During wartime, the paper changed its name to The Nippon Times, was under government censorship, and carried pro Japanese news reports. Of course, this is no different than what newspapers in Allied countries did during wartime, and anyone who has taken a modern history class will be familiar with seeing newspaper reprints like this, but but it’s a rare opportunity to get an alternate perspective on the battles that took place in the Pacific theater in English. And while some stories in the facsimiles are jarring, others have the ring of truth. Following the bombing of Hiroshima, an impassioned editorial decries what just might have been a war crime – had the US lost the war.

The historical sections continue on up until the present, and present everything from Yukio Mishima’s suicide to the death of Emperor Hirohoto, while the other sections of the exhibit are broken up thematically, under the following headings: Life & Culture; Cross-Cultural, which focuses on The Japan Times’s role as a forum for the country’s foreign residents; Sports; Advertising; Disasters; Education; and Yokohama, which focuses on the port city’s connection to the news industry. 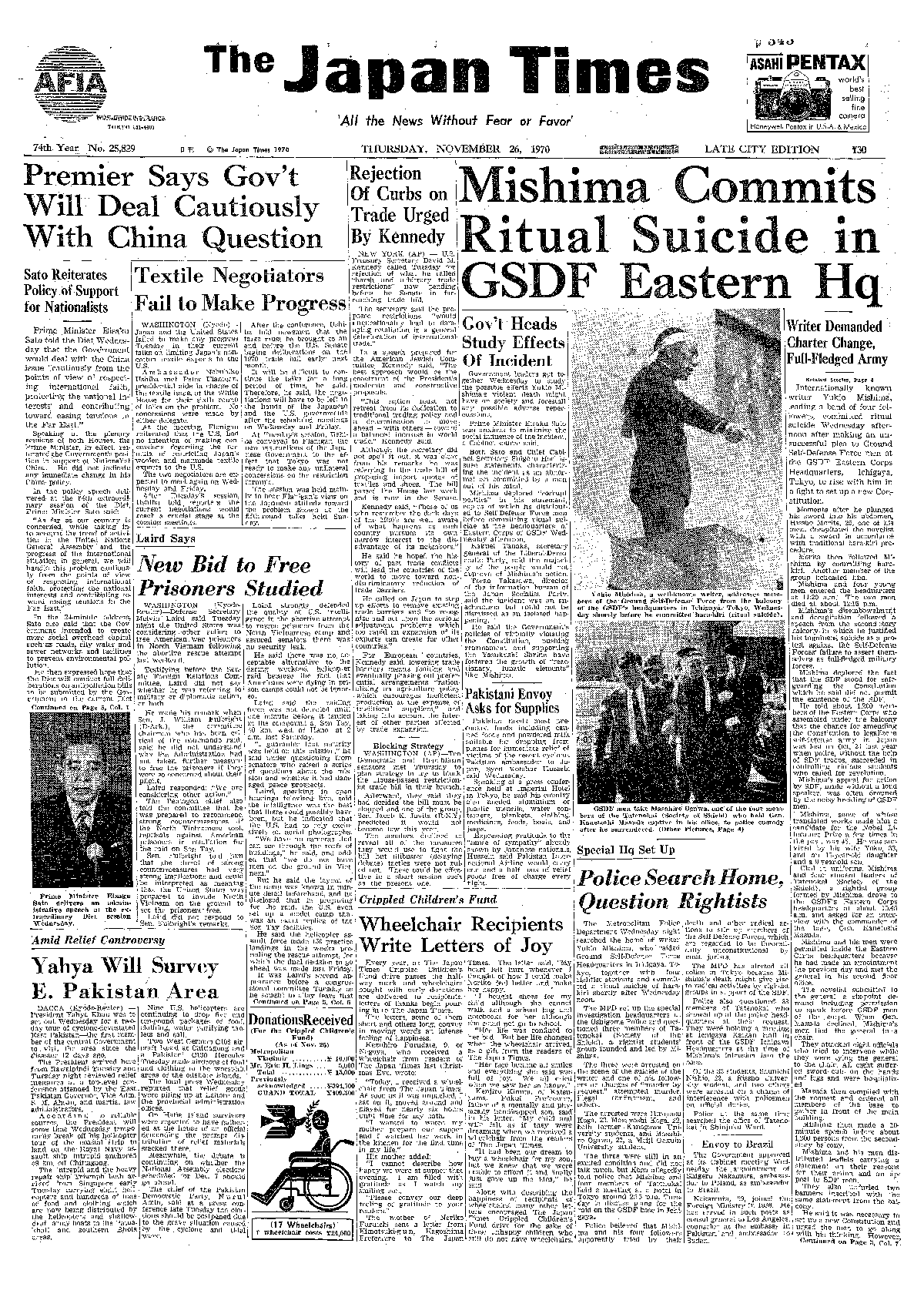 It’s an exhibit that’s definitely recommended for any student of history, or anyone with a passing interest in journalism, and well worth the trip out to Yokohama.