Canadian two-piece Japandroids, who bring their celebrated brand of garage rock-inspired anthems to Shibuya WWW on February 18th, tell us which city really never sleeps and chat to Kyle Mullin about how they managed to garner such a cult following in so many far-flung locales. Oh, and why the name?

Culture shock squeezed Brian King’s guts like a spasmodic fist. He stood on a street corner, unable to even flag down a cab, let alone understand why he had been slated to play a punk rock gig at dawn.

He kept waiting, squinting at the blood-clot traffic, but there wasn’t a single taxi in sight. Suddenly, his guide thrust out his hand, waving towards no one in particular, and several nearby cars skidded over to the curb, the complete strangers behind the wheels bellowing and bartering with King’s fixer for a reasonable fee to give the Japandroids frontman a lift.

“Forget New York, Moscow is the city that actually never sleeps,” King tells me by telephone ahead of a two-show Japan tour of the bizarre daybreak commute back to his hotel after a wee hours gig in the Russian capital back in 2010. “We had a fixer, someone babysitting us the whole time we were there; without him we wouldn’t have been able to leave the hotel. We couldn’t even get a cab, our guy would wave us over, and we’d jump in with someone random taking a detour on his way to work. No one could speak English, the signs were all in Cyrillic… it was the biggest culture shock we’d ever experienced in Eastern Europe – and that’s what made it so exciting. 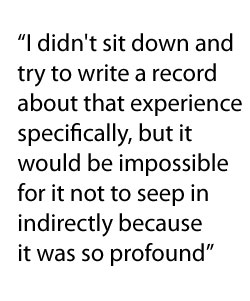 The most eye opening moment of all occurred at the gig itself. Like most Eastern European audiences, those that attended Japandroids’ Moscow show were simply grateful that the power punk duo from Vancouver – comprised of King and drummer David Prowse – were there at all, considering most bands end their Euro tours in Spain, Italy, or Germany. Despite that familiar gratitude, the gig was completely unique – the doors at that particular venue didn’t even open until midnight, and Japandroids weren’t scheduled to take the stage until 6am.

“When we were playing, we could see it was daylight through the windows, and afterwards everyone in the audience went out and had breakfast,” King says, as if to clarify his earlier comment about Moscow’s nocturnal nature making the Big Apple’s pale in comparison.

“After we finished the show it was totally like in the movies – us walking out the nightclub’s door and it’s daylight, and people are in their business suits going to work. It’s like there’s two populations in Moscow and one just wakes up when the other goes to bed.”

The difference is day and night between Japandroids’ touring schedule and that of most bands, who often shy away from such exotic locales. And that unabashed, sleeplessly adventurous attitude is more than evident in the duo’s rip-roaring performances, not only onstage but also in the studio. The latter helped King and Prowse garner a cult following in far flung locales like Moscow (among others) after they recorded and released their critically lauded 2012 sophomore album Celebration Rock.

It’s a fittingly titled disc brimming with bristling guitar riffs and sing-along choruses. On it, King doesn’t so much sing as hoarsely proclaim, and what he’s bellowing are not mere lyrics but rallying cries about fires that stay forever alight and lovesick young ’uns harmonizing like continuous thunder. But King hasn’t always been so enthused by his front man duties.

“With the songs on our first record, we were touring and playing them continually for years after we wrote them. After awhile I started to think ‘Ugh, if I’d known I was going to be playing them this long, I would’ve made more of an effort to change this, or improve that.’ So I made sure, on Celebration Rock, to write songs that we were really, really happy with.”

King sites Evil’s Sway, an album highlight with a groove that squirms like a tapeworm digging in as deeply as it can, and a catchy “Oh yeah!” call-and-response chorus between him and Prowse that stems from the pit of their stomachs like a rhythmic umbilical chord. Like all the songs on Celebration Rock, it careens to and fro at a white-knuckle pace that seems somewhat nonchalant. But in fact, King says he and Prowse performed the song no less than 10 times, each with different arrangements and lyrical tweaks, before settling on the version that made the album’s cut. He adds that level of thoroughness doesn’t strain he and Prowse’s relationship – if anything, it strengthens it.

“It’s been a long time since I showed him something and he wasn’t into it,” King says of the lyrics and song ideas he brings to the studio for Prowse drum to. King goes on to say, without seeming to realize how conceited he sounds: “I’m self editing ten times greater than he [Prowse] would ever think to comment or suggest anyway. So he knows by the time I say ‘Ok it’s done,’ I’ve gotten it as good as I think it can be, and there’s not much more room for improvement. So he’s lucky that way, he doesn’t really have to say much.”

So does Prowse agree with King’s supposedly flawless self-assessment?

“That’s a good question,” King says with a laugh. “But it’s why we’re in a band together. He likes my guitar playing and lyrics, so there’s not as much animosity in the ‘rock duo’ thing as people may think. If there was, it wouldn’t make sense for us to play in a two person band together.”

King says that he has equal admiration for Prowse, and for the bond they’ve managed to forge together.

“There’s not very much bullshit, for lack of a better word, because we just know. When we get in a room and I start playing something, we know without saying anything if it’s good or bad. We have the kind of relationship you can only get from knowing and working with someone for a very long time.”

He certainly didn’t find that sort of camaraderie at his last gig, although his duties involved literally digging for things that seemed far more precious. King was working in the field of geology before he formed Japandroids. The exploration company that employed him was publicly traded on the Toronto Stock Exchange, and it scrounged for minerals all over the world. King worked in the company’s Vancouver lab until he realized he’d already struck gold during his after-hours jam sessions with Prowse.

“The band became more and more time consuming, and started to infiltrate my 9-5 life. It eventually got to point where, if we wanted to go on tour, the only way to do it would be for me to quit. So I did, and never looked back again.”

King misses being able to afford an apartment in Vancouver (because geology salaries are far higher than that of rookie indie punks), but says he’s now much better suited to Japandroids’ jet setting tours than a dull day job. But they didn’t skyrocket to success right away; in fact, even the band’s name seemed to stagnate at first. 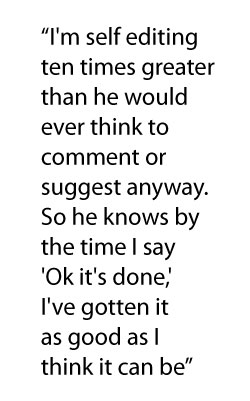 “Initially, Dave wanted to name the band Japanese Scream, and I wanted to name it Pleasure Droids,” King says, adding that they were both equally unsatisfied with the other’s choice. So, in a frenzy, King combined the two. “I did that because we needed a name to put on this poster for one of our first shows. I always thought, ‘We can change it later, whatever.’ And that was almost eight years ago now.”

He laughs about it today, but at the time Japandroids was all about half measures – using a name that was barely suitable to slap up on some random billboard and writing songs that King and Prowse grew tired of performing after only a few months into their first tour. So how did the pair grow from such mediocrity to recording songs a dozen different meticulous ways – in a tone that oozed life lusting gusto – on Celebration Rock?

The transition wasn’t gradual – in fact, it was a flash on a knife’s edge. Part way through Japandroids’ first tour, in the spring of 2009 (during the duo’s first big breakthrough) King collapsed from agonizing throbs tearing at his insides. He’d suffered slightly from stomach issues ever since he was a boy, but this time it was serous – he had a perforated ulcer and needed emergency surgery. It not only brought the tour to a halt just as it was gaining momentum, but also left doctors carving deep into King’s abdomen, not unlike the earth digging archeological projects that left him feeling equally hollow.

After desperate surgery saved his life, doctors sewed him back up again. But the stitches didn’t just leave scars across King’s belly; they were like mangled strings reminding him of his appetite for a fretboard, a riff, a piercing solo – an urge that couldn’t be satisfied.

“It was one of the only truly traumatic experiences I’d ever had,” King says. “I mean, I came very close to dying. And while I didn’t die, I was very injured, had emergency surgery, spent two weeks in the hospital, lost almost 25 pounds, had to learn how to walk again, then learn how to move again. I certainly couldn’t play guitar for a while. The whole thing took two months.”

So did the brush with death, the post-op agony, and the slow recovery, have anything to do with Japandroids’ leap forward on Celebration Rock? Is that where its anthemic lyrics, its breathless tempo, its tone of raw joy, all came from – all of it torn from King’s torso in that operating room?

“I think it did inspire me, subconsciously,” King says of the perforated ulcer and resulting operation. “I didn’t sit down and try to write a record about that experience specifically, but it would be impossible for it not to seep in indirectly because it was so profound.”

“It was also just so painful, the recovery. I didn’t really know what pain was. When you go through an experience like that and spend a lot of time recovering in the hospital, you have a lot of time to think and reflect and all that kind of stuff,” he says, adding that those contemplative moments lingered on – when he was recording new music, when he was standing lost on a foreign city’s street corner, when he was performing for grateful Eastern Europeans at the crack of dawn, and when he’s jamming with a friend who understands him not through words, but through gut instinct.

“I don’t remember any single incident in my life affecting me in that sense as much as that ulcer,” King says. “So I’m very, very happy to be alive.”

Kyle Mullin is a roaming rock journalist who has contributed to music mags around the world. You can read his interviews with Iggy Pop, David Byrne and St. Vincent, Brian Wilson and others at kylelawrence.wordpress.com

Japandroids play at Shibuya WWW on February 18. Tickets cost ¥5,250 in advance. (Doors 6:30, gig 7:30) For more information and to buy your tickets, see: smash-jpn.com/live/?id=1888. Japandroids are signed to Polyvinyl Records and their official site is at japandroids.com.