Shinzo Abe has been elected – for the second time – to lead Japan as its prime minister. His hawkish stance on China might be grabbing many of the headlines but Henry Watts sees significance back home and discusses what this means for Japan and its party political system.

It was not long ago that political scientist Ethan Scheiner aptly described politics in Japan as “democracy without competition”.

In fact, that was in 2006, when the fortress of the Liberal Democratic Party (LDP) had been standing tall in government for over fifty years of almost uninterrupted rule, still guarded by its own loyal brand of bureaucracy and clientelism, and enjoying a new leash of life under the charismatic and popular reign of Junichiro Koizumi.

The scene is a little different now. The LDP may be back in power, but this time they’ve had to recover from their landslide defeat in 2009 and overcome not only the incumbent Democratic Party of Japan (DPJ) but also a kaleidoscope of parties vying to be the so-called “third force“.

After Yoshihiko Noda, then DPJ prime minister, announced in mid-November that he would dissolve government and called an election for a month later, a flurry of smaller parties formed, merged and re-shuffled. The People’s Life First Party, founded by Ichiro Ozawa, was formed out of the Tomorrow Party of Japan, Nuclear-Free Party and Green Wind (Japan is, by the way, a world leader in terrible party names).

It was a partnership of right-wing heavyweights – Toru Hashimoto and Shintaro Ishihara – that formed the Japan Restoration Party (JRP) and eventually assumed the position of the “third force”, winning 54 seats (only 3 fewer than the incumbent DPJ). A total of 1,504 candidates ran – a record high under the current election system. 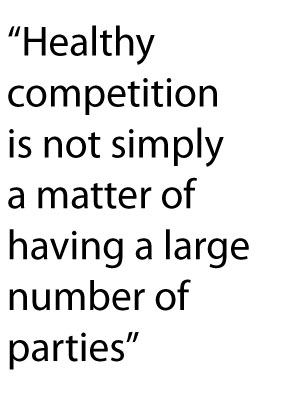 Despite much competition, there was not much in the way of a contest. The eventual one-sided nature of the election in favour of the LDP suggests rather that it was a case of quantity of opposition parties over quality.

With around 40 per cent of people, polled days before the election, saying they were undecided, “third force” parties were scrambling for the votes of the disaffected.

The sheer number of parties and the extent of the pre-election shuffling seemed instead to have dizzying and distracting effect on the electorate. Some opted for the right-wing JRP option, but most decided to run with the more familiar and enduring LDP. If 2009 was about “change”, 2012 was about “political stability” (a factor 54 percent of respondents to an Asahi Shimbun poll cited as their main concern).

Healthy competition is not simply a matter of having a large number of parties. It takes infrastructure, a party machine and a backbone to withstand the rigours of party politics without fragmenting.

The DPJ has taken this approach in the past but it remains to be seen, after the latest election blow, whether or not the backbone has been knocked out of its previously sturdy frame.

In her insightful book, Japanese Society, social anthropologist Chie Nakane wrote that, in Japan, “a change of leadership is a very critical period for the continuance and stability of the group”. She cites the Buddhist sage, Hōnen, who returned to find his disciples bickering after periods of absence. He said: “you shall not stay together, but each go (your) own separate way”.

This has been the default response for the LDP after large-scale political defeats and leadership failures. After an election defeat in 2009 for instance, many LDP party members, mostly from the sprightly Koizumi faction, went their ‘own separate ways’, either by joining other parties or forming their own – Your Party, the New Renaissance Party, the Sunrise Party – hence why there were so many parties competing in 2012.

The same happened in 1992-3, when more than fifty LDP members left to form other parties (Shinseito, New Party Sakigake and others) after Morihiro Hosakawa left the LDP and a vote of no-confidence was passed against the Miyazawa government.

This approach places much emphasis on a leader, perhaps more so than a cause, which means that when one’s leader falls, one can tend to drift with the tides of power. As specialist of Japanese politics, Sarah Hyde, notes in her book The Transformation of the Japanese Left, many of these defectors soon “returned to the home of the LDP” after the LDP’s narrow victory in the 1996 general election.

This allowed the party to “return to within striking distance of its former glory”. As such, one might not be surprised to see renegade members slowly trickle back into the party ranks of the LDP now that it is in power. Indeed, during Shinzo Abe’s first stint as prime minister, in 2007, he re-opened the party to the rebels that Koizumi had shut out (on account of disagreements on postal reform). This brought back what Chuo University’s Steven R. Reed called the “traditional non-policy” of the LDP – “if you win, you are LDP”. 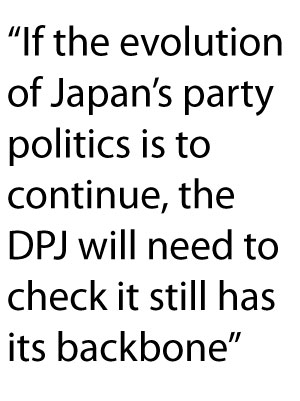 Such realpolitik fluttering has an expression in Japanese – nagaimono niha makarero (which roughly translates as “if you can’t beat them, join them”). It is precisely the sort of acquiescence that would, if now adopted by a despondent DPJ, make them a very spineless sort of opposition.

The DPJ should not commit an LDP-style exodus from their cause, as described by Chie Nakane. The DPJ has assumed the prospective role as the “other party” in a burgeoning two-party system and has, since its inception in 1998, shown just how pregnable the LDP fortress can be. Its members should bear this in mind while the LDP looks to re-establish old ties and re-build its shattered walls.

In light of two giant electoral mood swings, two things have become clear. Firstly, the LDP is not as infallible as it once was, and secondly the DPJ cause is not as lost as it might seem.

Ever since the LDP split for the first time, in 1993, the evolution of Japan’s party system has gathered pace more rapidly. The brief Horikawa-led eight-party coalition government that followed the ’93 LDP split (which lasted only 10 months), managed to pass electoral and political reforms that would set the stage for a two-party arrangement.

This esoteric reform introduced a mixed-member system including single-member districts and PR. It was a way to clean up party funding, away from corruption, but was a major driver of party-system change.

The neo-liberal reforms that were so forcefully pushed forward by “Cool Biz” Koizumi, the LDP maverick who led Japan between 2001-2006 (reforms that were also championed by the DPJ in its nascent years), also contributed to the end of much of the old ways of politics in Japan. Koizumi led an assault on clientelism and ‘convoy capitalism‘ (an economy of shifting state-capital to favoured sectors), taking away some major incumbent advantages and breaking down much of the traditional LDP-socialist wing of his own party.

Both parties have been playing catch up in this new setting ever since. And now, with the Shinzo Abe-led LDP positioning itself ideologically on the Right – hawkish on security policy and neo-liberal on economic policy – the DPJ will have plenty to get stuck into in opposition.

This is especially true if the even more right-wing JRP stick around. When in power, the DPJ was moderate on security policy and preferred to prioritize welfare and social programs ahead of growth.

The party will have to build on these ideological wedges if it is to become more than a party for the protest vote. But first, if the evolution of Japan’s party politics is to continue, the DPJ will need to check it still has its backbone – the same one it used to pull itself back up after major defeat in the election of 2005.

Henry Watts is a British writer on world politics and Japanese society. You can read more of his work on his blog – letterstoyoungbarbarians.