When Weekender went to Wakayama we found beauty we hardly knew existed. From amongst the historic world heritage mountains of Kumano Kodo, writer and Nagoya resident Adam Miller gives us an introduction to the fascinating prefecture south-west of Osaka that will make you want to take the trip.

Rich with pilgrimage sites, natural hot springs, beautiful scenery, ancient walking routes and the friendliest locals you will ever meet, for those fascinated by Japan’s traditional side, the sacred area of Kumano is a must visit.

Kumano has been a well-known retreat amongst Japanese people for centuries. Over the past few years it has become more and more accessible, in turn gaining popularity amongst foreigners, too.

A sharp increase in the number of English speakers is no doubt due to the hard work of the Tanabe City Kumano Tourism Bureau and their man in the field, Brad Towle.

Having come to the area over a decade ago, Towle’s story is a familiar one to many foreigners in Japan, starting his life in Japan by teaching at public schools in the area. After moving back to his native Canada, Brad combined his interests in the outdoors and Japanese culture by guiding Japanese visitors on wilderness trips.

It was whilst living the outdoor life that Towle received the call that was to lead him back to Japan, to head up the newly-reorganized Tourism Bureau, which has gone from strength to strength since his arrival.

Fascinated by the plethora of historical and spiritual sites, he has a vast knowledge of the area and has used that (along with his obvious passion) to create in-depth English explanations about almost every single aspect of Kumano. The importance of multilingual information (English as well as French, Korean, Chinese and of course Japanese are available on the website, which has loads of extra information: www.tb-kumano.jp) is not just a ploy to attract tour-busses. Indeed, Brad truly believes in “preservation through education.” It is clear that the bureau is doing a sterling job, having been awarded a runner-up prize in a global tourism award, known as “Tourism for Tomorrow – Destination Stewardship.”

A few years ago saw the fleeting fad of the Yama-girl – the fashion for wearing garments with forest-inspired materials and colours popular especially amongst city dwelling girls – but Brad is far more optimistic for genuine nature exploration, which seems to have recently grown in popularity, saying, “I hope it isn’t a boom but a movement.” 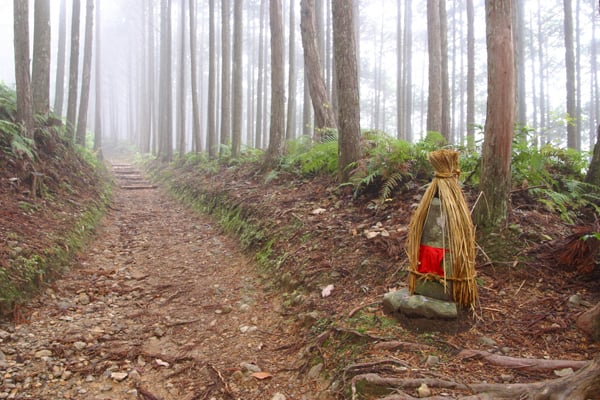 Tanabe City is in the centre of the Kumano region and is the hub for the Kumano Kodo pilgrimage routes, which date back 1000 years. Pilgrims from all levels of society would trek from Kyoto to “purify” themselves in the natural and spiritual cornerstones of Kumano. The three taisha, or grand shrines, along the route gained UNESCO World Heritage status in 2004 and with so much to see it is easy to see why. Kumano Hayatama Taisha is near Kamikura-jinja which rests atop a mountain and is only accessible via a roughly cobbled ancient path. It offers a view of both Wakayama and Mie prefectures and is home to a winter festival, at which thousands of participants race down the steep and uneven steps whilst holding flaming wooden torches.

Kumano Nachi Taisha is a large complex of beautiful red buildings. Only a short walk away is the breathtaking Nachi Waterfall. Taking a sip from the spring next to the waterfall is said to prolong your life, while seeing Japan’s tallest waterfall up-close and personal is truly astonishing.

Kumano Hongu Taisha is key to every pilgrimage route. Unfortunately, the shrine was severely damaged during a flood in 1889. The area is now home to the plot of land which housed the original shrine, a sandbank known as Oyunohara, on the Kumanogawa River, and Japan’s largest torii, which is situated at the entrance.

There are plenty of natural hot springs to choose from in the Kii mountain range. The luxurious Wataze Onsen is perfect but if you are looking to save a little money, you can visit Kawayu, a river which has pockets of naturally hot water. There are small bamboo fences dotted along the riverside; many people take advantage of this publicly owned spot by digging small pools amongst the smooth stones which soon fill with warm water.

Yunomine Onsen is an area with piping hot water springing up from the ground. You are encouraged to make the most of the around-90C heat by buying fresh eggs or sweet potatoes, and cooking them in the water. The real treat, though, is the bath inside a small wooden cabin known as Tsuboyu, a World Heritage site with rentable private cabins, which rests on the river itself and mixes hot water with the cool and crisp river water.

Aikido is the reason many foreigners fall in love with Japanese culture. Fanatics will know that the practice was started in the 1920s by Ueshiba Morihei, who was born in Tanabe City in 1883. Now, his hometown and former residence are a pilgrimage site for many Aikido fans, who travel from all over the world to see where this amazing martial art originated.

Whereas other, larger cities in the area boast specialities such as takoyaki, okonomiyaki and grilled or fried chicken wings, tebasaki, the local cuisine in and around the Tanabe City area is far healthier. Much of the food comes from the sea, with a huge selection of fresh fish available at the excellent Katsuura Fish Market. The mountains also offer a wide selection of wild vegetation and game. Organic green tea is also popular, as is the odd but strangely addictive juice made from shiso leaves.

For more information, including suggested itineraries, transport links and places to stay, have a look at the Official Website of Tanabe City/Kumano Region in Wakayama Prefecture, Japan