A Weekend in Taipei

Weekender recently took a trip to Taiwan – just a three hour flight from Tokyo – and had a great time. Check out the full story in our May 2012 issue, or have a look at some of the highlights, below.

Taiwan is a country with a rich and lengthy history but the past decade has seen a barrage of change, especially for the capital, Taipei.  Instead of being dragged kicking and screaming towards modernity, however, it is skipping towards it gleefully whilst reserving the utmost respect for its heritage and tradition.

This means the country truly offers something for everyone.  The natural beauty of the beaches, mountain ranges and hot springs, along with the stunning historical monuments, temples and museums give backpackers and culture vultures alike a reason to visit.

Add to this an influx of international brands, designer goods, department stores and luxury hotels and you can see why every year sees an increase in the number of tourists flocking from Japan. 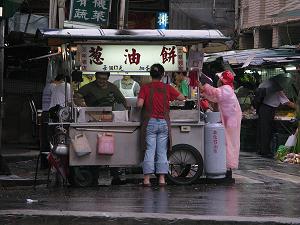 Whether or not you go is not the issue – that decision should be easy – the real problem is deciding when.

Taiwan follows a seasonal routine similar to that of Japan but the sub-tropical winters are far milder with the temperature very rarely dropping below 10°C.  The summers are hot and humid. If you hate the heat, you have been warned; typhoons and tropical downpours are common during the summer months.

The food is as diverse as the culture, with Michelin-starred chefs offering gourmet meals at the vast array of five-star hotels and fine restaurants.

The premium quality, though, obviously has a price-tag to match. For a mere fraction of this there are countless food stalls lining the streets which offer everything from freshly steamed dim sum to the foul smelling but sweet tasting dorian fruit.

Taiwanese food will surprise many people. It is not as oily as many Chinese foods commonly served in Japan and the tropical ingredients are used with impressive versatility. The atmosphere is as varied as the budget. If you want peaceful refinement then you have a wide range to choose from. If you want to see the “real” Taiwan, though, check out the enthusiastic shouts and speedy service of the talkative night market staff who will tempt you with their local cuisine; an evening walking amongst the sights, sounds and smells of the street stalls is not to be missed.

The amazing array of noodles, fried dumplings, grilled tofu and as many parts of the animal as you can think of dipped in sweet, piquant sauce and served to the wandering crowds mean this is the place to be after dark. 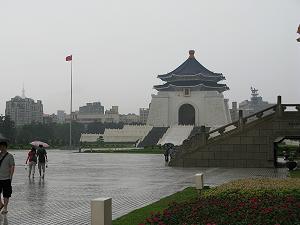 Other must see sights include the amazing Chiang Kai-shek Memorial Hall, pictured here in the rain!

The mammoth building is a 76-metre-tall concrete and marble structure built in memory of Generalissimo Chiang Kai-shek, a military and political leader who played a central role in the Nationalist Party.

Building started the year after he died in 1975 and took over three years to complete.  There are two sets of 89 steps leading to the main hall – a step for every year that Kai-shek lived.

At the top is the spacious hall, which houses a large bronze statue of the man, smiling, seated and welcoming; behind him are inscribed the words “ethics, democracy and science.”

The 101 Tower may not have the historical context of the Memorial Hall but it does have the wow-factor.  Although it has five basement levels the building has 101 floors above ground (climb to the 89th for an outdoor observation deck you could stroll around for hours) and was officially – at over 500 metres tall – the tallest building in the world until the Burj Khalifa was completed in Dubai in 2010. It is still, however, the world’s tallest green building,  holding the LEED (Leadership in Energy and Environmental Design) Platinum certification.

The design itself is weighted with symbolism. There are eight sections of the tower, that being the number associated with luck and prosperity. The sections are also said to resemble a bamboo stalk or a stack of traditional money boxes. The colourful lights that illuminate the tower throughout the night symbolise the rainbow – the liminal space which links heaven and earth.

Although the building dominates the skyline of Taipei, it really demands your attention during the New Year celebrations when an extravagant fireworks display is launched directly from the building.  This year’s display team launched no less than 30,000 rockets!

No matter why you may wish to go to Taipei, there is no real excuse not to.

Now that Haneda Airport offers a direct flight into downtown Taipei – Songshan Airport is a short MRT ride from the city centre – you can get there from Tokyo in just over 3 hours.  So what are you waiting for?

If you head off now, you can be there and back in time for breakfast tomorrow – after visiting the night markets and restaurants, though, you might not need it.