The Price of Beauty in Japan

There is no denying that in Japan, beauty is big business. In fact, after the US, Japan is the second biggest cosmetics market in the world. According to Japan’s Ministry of Economy, Trade and Industry, cosmetics still turned over more than ¥1,500 billion in 2008, despite the effects of the global financial crisis.

However, as prolific as the industry may be, for foreigners trying to make head or tail of Japanese beauty treatments and cosmetics, it can be very confusing. With an emphasis on products that seem to be more wacky than practical, consumers can never be too sure if they are going to end up hurting, instead of pampering, themselves.

Items designed to make your face smaller, keep your tummy in, correct the angle of your nose, make your skin sparkle, beautify your nails, or keep your lips ‘virgin pink’ often end up looking like forms of medieval torture. Yet do these products actually work? I recently sat down with Hisano Komine, one of Japan’s most prominent makeup artists, to discuss the feasibility and credibility of some of Japan’s most popular beauty products and treatments.

Komine looks over my array of items purchased from various shops around Tokyo and laughs. “While the science behind a lot of these products is right, the product itself may not work in its own,” Komine says. “In Japan, the idea of beauty is to look cute for men,” and a lot of the more madcap products we see on shelves are usually created with this in mind. “Many companies do their market research by going down to Shibuya, talking to teenage girls and young women and asking them what they want.” Of course with many of them thinking about boyfriends, their answers reflect what they believe men want to see. Generally though, most cosmetics companies are focusing on anti-aging products. “The Japanese population is getting older, so this market is growing every year,” Komine explains.

“Many companies do their market research by going down to Shibuya, talking to teenage girls and young women and asking them what they want.” Of course with many of them thinking about boyfriends, their answers reflect what they believe men want to see.”

But getting back to the items at hand, if they do not work on their own, how can companies make such outlandish claims? Komine clarifies that when it comes to items like these (see below), they do not come under the cosmetics guidelines “because they are more like toys.” She says, “As long as they are not dangerous, have no harmful ingredients and are not causing any harm, [then they are OK to go on sale].”

With that in mind, I embarked on my own testing mission with an open mind.

I started with one of Japan’s biggest beauty obsessions: eyelashes. As Komine told me, Japanese women love using eyelashes as a way to make them appear “cute and friendly.” Beauté Absolue, a salon in Minami Azabu, attached 100 synthetic eyelashes with a natural curl to my real, upper lashes. The benefits of this were that I would not need to wear mascara, and they would last for up to two or three months. The results were instantly noticeable— my eyes were finally framed with the lashes I had always longed for. But the real test came when Komine saw me and was surprised to learn my lashes were extensions.

The packaging of the Foot Peel Pack promised me “easy and surprise.”  For 90 minutes, I sat with my feet up, each wrapped in a plastic booty filled with a light green, slimy liquid. But I soon realized that was the easy part. Four days later, I got the surprise I was promised. I scratched an itchy foot to realize I had taken off more than a few layers of skin. I looked down to see my feet red and raw, with skin peeling off in large sheets. Much to my horror, this continued for about four or five days. At one point my slippers were full of dead skin, and I even cancelled a pedicure. Once the peeling stopped, my feet felt anything but glorious; instead, they were tough and rough. Yet two weeks to the day after the initial treatment, I woke up to the final surprise. My feet had miraculously come good and are now soft, smooth, and free of dead skin. Proudly made in Japan, this sauna suit is guaranteed to provide you “relax bath time.” The idea is simple— you don the metallic plastic suit and then sit in a bath full of water heated to between 36 and 40 degrees Celsius. You do this for 20 minutes at a time, several times a week in order to sweat yourself slim. The suit even claims to contain the element germanium, a known heat conductor. Honestly, it felt like I was wearing a garbage bag in the bath. While I did get hot and sweaty, I also got incredibly thirsty. I can only assume that whatever weight I sweated out was put back on immediately after as I guzzled a few liters of water in an effort to rehydrate myself.

Komine says that a lot of money would have gone into the development of this suit and that while the idea behind it is right, you would probably only lose fluids that would be quickly replenished.

Uguisu no fun, or ‘nightingale droppings,’ was long hailed as a secret of the geisha. Masks and creams containing the nitrogen-rich feces of the revered bird were said to exfoliate and whiten the skin. I gave the 21st century version a go, and was pleasantly surprised. There was no odor; only smooth and supple skin.

Speaking with Komine, I was deflated to learn that this product, so cleverly marketed, in fact contains no trace of bird droppings. “It is mostly made up of talcum powder,” she explained after carefully examining the product’s ingredients. 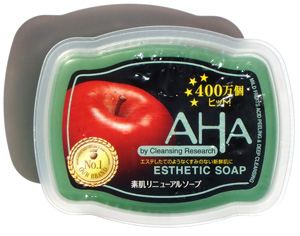 The AHA Esthetic Soap claims to be a mild fruit acid soap for peeling and deep cleansing. I soon discovered there is a reason the soap is green— just like arsenic, you should not go near it. I could not leave the soap on for the required time. Even with my eyes shut, they stung and my skin felt like it was burning. I quickly washed everything off. For the next two to three days my face and hands were extremely dry and tight.

Komine tells me that the idea of this product is to take off old skin, but it is probably good only for those people with really dirty or clogged skin. It also has a high alcohol content, hence the dryness. “There was a time when alcohol was a popular ingredient. While it does clear your skin, it also strips it and is not good for your complexion.”

The packaging of Hana Hana suggested my nose and nostrils may be sitting at an undesirable angle. In order to fix this, I needed to wear a clip on my nose for a few short minutes every day. The clip would lift my nose to the more desirable angle of 35 degrees. Sitting on the bridge of my nose, the clip posed no problem. It was the two protruding arms that stuck up my nostrils that caused the real pain. On day one I lasted no more than 60 seconds. Day two was much the same. On day three I decided to persevere and sit with it on my nose for the required time. I lasted no more than five minutes, but the red marks across my nose and sore nostrils lasted a good 24 hours more. Komine says that theory of this product is correct, but in order to actually change the angle of the nose, you would actually need to “move about 30 other bones in your head and nose first!”

The Oasis Gel Mask was like heaven to my lips. I peeled the giant lipshaped mask off its backing sheet and stuck it over my mouth. With such a concentrated hydration effort, my lips looked fuller and very, very pink. How long it would normally last is hard to say— my effects quickly wore off as my newfound lips pouted and puckered up in front of the mirror.

Vivi Ball: Massage your face with a small, silver ball to remove dirt and lift your facial muscles. Whether this worked or not was very hard to ascertain, but it sure did feel nice and left me relaxed. Komine tells me her mother used to use something similar when she was a young girl, so it is funny to see this back in style again.

Q10 Mask: With the mask on I felt like Jason from the horror movies Friday the 13th. But after 15 minutes I peeled the mask off and my face and neck were left feeling very hydrated and soft. Easy to use.

Shiseido Collagen Drink: This shot of collagen was sickly sweet. Komine explained that although it may not instantly do anything for me, it was “full of lots of other good things for you such as Vitamin C.” No harm done.

Slim Mouth Piece: Train your smile to be slim by wearing this device for two to three minutes every day. I tried, I really did. But my smile is still big, although Komine says the exercise is good for facial muscles and for excreting toxins.

No amount of cosmetics or make up in the world will help if you aren’t putting the right things into your body to begin with. Hisano Komine is now offering workshops and lessons advising people how to achieve natural beauty from the inside out. For more information visit www.detox-beaute-sss.com

Beauté absolue was responsible for my amazing eyelash transformation. For more information contact Hideko Ojima on  03-3444-2120 or visit www.beauteabsolue.net