The stuff made from dreams

The Japanese word “anime” has arrived with a whiz, flash and a bang into the English language. In the past, anime producers were not much more than a cottage industry. Now they are big business and serious interest is given to the quality and originality of their work. And the audience is no longer just children and geeks. Japanese anime is attracting a growing, worldwide legion of adult fans.

This year is turning out to be a special one for anime. Three top directors, Hayao Miyazaki, Mamoru Oshii and Katsuro Otomo are all releasing their lat­est films in 2004 — Miyazaki’s “Howl’s Moving Castle,” Oshii’s “Innocence,” and Otomo’s “Steamboy.” Their works easily fit in the “blockbuster” category.

Kazuaki Kiriya made a bril­liant feature debut in April with his intensely futuristic “Casshern” based on a 1970s anime series. The fantasy adven­ture “Spirit,” produced by Gonzo, is capturing mainstream animation film fans with its straight-forward theme. There’s the innovative 3D-CG animated film “Appleseed,” produced by Fumihiko Sori, and also “The Place Promised in Our Early Days,” by Makoto Shinkai, which will be released this fall. And there are many more big budget anime in production for release in 2005-2006.

“Japanese animation has shifted from being a ‘geek’ cul­ture to mainstream,” says Kiyotaka Ninomiya, managing executive of Tohokushinsha Film Corporation. “There’s an anima­tion boom in Japan now. Animations broadcast on televi­sion have doubled.”

Ninomiya attributes this boom to the fact that, in the past, revenue sources for animations were network, merchandising and sales to local television sta­tions, but today there are the huge additions of overseas sales and DVDs. Why the explosion in popularity in Japan and world­wide?

As far back as Shakespeare’s “A Midsummer Night’s Dream,” and long before that in Ancient Greek drama, there was recogni­tion that imagination can turn impossible things into reality. This is the world of anime — a world where we can give free rein to our fantasies and escape the mundane earth to a place where we can be any character we choose, away from the cares of mortgages, taxes, visas, Iraq.

At the recent Cannes Film festival, Oshii’s “Innocence” became the first Japanese anime film to compete for the Palme d’Or. Despite being eclipsed by “Shrek 2” and Michael Moore’s winning entry “Fahrenheit 9/11,” Oshii showed that anime can go elbow to elbow with the big boys in film-making. “Innocence” starts in the year 2032. The line between humans and machines has been blurred almost beyond distinc­tion. Humans have forgotten they are human and co-exist with cyborgs (human spirits inhabit­ing entirely mechanized bodies) and dolls (robots with no human elements at all).

Batou is a cyborg. His body is artificial: the only remnants left of his humanity are traces of his brain and the memories of a woman called The Major. A detective for the government’s covert anti-terrorist unit, Public Security Section 9, Batou is inves­tigating the case of a gynoid — a hyper-realistic female robot cre­ated specifically for sexual companionship — who malfunc­tions and slaughters her owner.

As Batou delves deeper into the investigation, questions arise about humanity’s need to immortalize its image in dolls. The answers to those questions lead to the shocking truth behind the crime and quite possibly the very meaning of life.

For some, “Innocence” may just be an overblown comic on the big screen, but the quality of the story and dialogue would stand up alongside the philo­sophic wanderings of Shakespeare’s “The Tempest.”

As one character muses, “Life and death come and go like mar­ionettes dancing on a table. Once their strings are cut, they easily crumble. Why are humans so obsessed with recreating them­selves? Let one walk alone, com­mitting no sin, with few wishes, like an elephant in the forest.”

One can imagine Socrates relating this to Plato or Buddha giving a talk at Sarnath with similar words.

Oshii spent nine years mak­ing this follow-up to his cult hit “Ghost in the Shell.” The characters are the same but the political tone has given way to a philo­sophical one, a hymn to life. Also, the technical rendering is much more formal, mixing 2D, 3D and computer graphics.

In Cannes, Oshii said his intention with this anime was to show that the world does not just revolve around the human race. Instead, he says, “it concludes that all forms of life – humans, animals and robots – are equal. In this day and age when everything is uncertain, we should all think about what to value in life and how to co-exist with others. I wanted to go beyond typical ani­mation limits, answer personal questions and at the same time appeal to filmgoers. 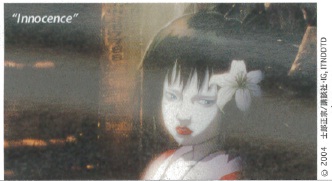 “For ‘Innocence,’ I had a big­ger budget than for ‘Ghost in the Shell.’ I also had more time to prepare it. Yet despite the eco­nomic leeway, abundant details and directions, it was still impor­tant to tell an intimate story. Personally, I adore the quotes in the film. It was a real pleasure for me. The budget and work that went into it contributed to the high quality of imagery. The images had to be up to par, as rich as the visuals.”

Inspired by French film­maker Jean-Luc Godard, Oshii used quotes from other authors, bringing a certain richness to the dialogue. He did not rely just on visuals but gave the audience the chance to concoct their own interpretation.

“The image associated to the text corresponds to a unifying act that aims at renewing cinema, that lets it take on new dimensions,” says Oshii.

He compared his animation work to Hollywood saying, “I think Hollywood is relying more and more on 3D imaging like that of ‘Shrek.’ The strength behind Japanese animation is based in the designer’s pencil. Even if it mixes 2D, 3D and computer graphics, the foundation is still 2D. Just doing 3D does not interest me.”

Japanese anime themes and styles have reached beyond the designer’s pencil to infuse live action movies, such as the “Matrix” trilogy and Quentin Tarantino’s “Kill Bill,” which even contains a 12-minute anime sequence.

One of the big new releases this month from Warner Bros, in Japan is “Cutie Honey,” a big-screen revival of Go Nagai’s clas­sic ’70s manga and TV series. The movie is a souped up anime with real life characters — director Hideaki Anno uses a technique he calls “hanimation,” drawing every scene first, recapturing everything in live-action and then combining the two.

Honey Kisaragi (played in the movie by 22-year-old Eriko Sato), is a seemingly normal 16-year-old high school student who has been designed by her father, Professor Kisaragi, to replace his dead daughter.

A mysterious man named Tasogare no Prince gives her a magic heart choker and ring that she uses to transform herself into an array of different characters by saying “Honey Flash!!!” They include Nurse Honey, Hurricane Honey, Scoop Honey, Stage Honey, Elegance Honey, Escort Honey and the final main trans­formation, Cutie Honey.

In the series, Honey’s father was kidnapped by the evil Panther Claw Crime Syndicate. Equipped with a wrist boomerang and a long sword, her job was to fight Panther Claw’s henchmen to avenge her father’s death.

Cutie Honey looks like a Japanese version of Lara Croft, Japan’s answer to Angelina Jolie. Honey’s sexiness, though, which did much to attract her original fanbase, has been toned down for the film, making it more family-friendly.

The trailer is entertaining and the film is a must see for anyone with a passion for late afternoon Japanese TV.

Also see Tohokushinasha Film Corporation’s cult favorite “She, the Ultimate Weapon,” as well as director-artist Keita Amemiya’s popular “The Adventures of Tweeny Witches,” and the famous “Animatrix” from Studio 4C.

You can easily rent the clas­sics from your local Japanese video and DVD shop. For English language subtitles or dubbed versions ask at your shop first, or check out one of the many Web sites devoted to anime films in English.

There are some future clas­sics in the virtual pipeline now. As they say in Japanese, otanoshi-mi ni!! — look forward to it.

A BEGINNER’S GUIDE TO ANIME INFORMATION

Books on anime and manga

-You can buy these books on www.amazon.com

-These are U.S.-based Web sites from which you can order English-subtitled movies and English-language comics.