Tom Cruise was just one of the people Bill Hersey met this month. The Hollywood star was in Tokyo to promote his new film, Jack reacher (local title, ‘Outlaw’) and Bill went to the official Paramount Japan announcement party. What else has he been up to?

Looking back, I was a bit concerned when I thought about my decision to spend the Christmas and New Year holidays here in Japan this year. The holiday season, as you know, was extra long for a lot of us and for some strange reason I thought I would probably end up getting bored. I’m happy to say that never happened.

With all the seasonal parties, marvelous cultural events, visits to orphans’ homes, coffees with friends, lots of interesting people partying at the New Lex where you can often find me, a super schedule of TV shows and a little time to just lay back and think how lucky I’ve been in the last year, I was sure kept busy. All that, plus a feeble attempt to get my apartment more organized; it’s like a museum, with evidence of my 50-years of shopping for interesting, funky things from all over the world and over 40-years worth of photos and tear sheets from the many publications I’ve written for.I didn’t really get into that as much as I hoped I would and really have to seriously start on that soon. Don’t many of us always think that sort of thing this time of year?

Highlights of the busy two weeks included planning and helping set up my, the Weekender and Hilton Tokyo’s 15th annual holiday party for Japanese orphans; packing and sending a half a dozen big boxes of clothes and toys friends had donated for needy families in the Philippines; and catching many of the special holiday cultural events at temples, shrines, parks, shopping malls and concert venues.

Embassy events included a concert with Croatian pianist, Goran Filipe, hosted by his country’s ambassador to Japan, Mrs. Mira Martines and a colourful, traditional Christmas party hosted by Maria Teresa Lopez at the tastefully decorated embassy residence. I also saw a dynamic exhibition of photos taken by Japanese who had visited Oman at the Oman Embassy in Hiroo, an exciting program of traditional Indian dance sponsored by Min-on Concert Association at Nakano Sun Plaza and several intimate get-togethers hosted by diplomat friends who, like me, were in Japan for the holidays.

As always at this time of the year there were a lot for special TV shows. Our British friends continue to do some amazing things and the London production of Andrew Lloyd Webber’s The Phantom of the Opera, which was filmed at the Royal Albert Hall in London, was musical entertainment at its best. A special finale bonus featured my favorite singer, Sarah Brightman, singing the show’s theme song. In his intro of her, Webber called her “The lady who makes music from heaven”.

Pick up one of her several dozen CDs on the renovated 7th floor of Tower Records in Shibuya and I’m sure you’ll hear why he feels this way. I might add Sarah is not only a top talent, she’s a very nice lady (I met and had a party for her at the New Lex few years ago). For your info Tower has re-opened its well stocked magazine and book shop which was on the 7th floor: it’s now on the 3rd, right beside a nice looking café.

Thanks to friends in show promotions also got to see local productions of both Cats and The Lion King. I had seen both of these on Broadway and in London and really enjoyed the beautifully staged shows here. Language aside, if you know the music you’ll enjoy them as well. Tickets start at about 4,000 yen – a real bargain, I think, especially after talking to a friend in NYC who paid $300 to see the hit musical, The Book of Mormon. He said tickets are really hard to come by over there.

On the lighter side, I really enjoyed partying with a group of snowboarders from New Zealand in Roppongi. Our Kiwi friends do know how to have a good time: I really hope to get to their beautiful country some time this year.

After New Year’s, I got together with a long-time friend, world renowned art dealer Norman Tolman, for breakfast at the completely renovated Palace Hotel. I had no time to check it all out but the light bright and big dining areas in the lobby area look fantastic.

The high ceilings are impressive, as are the fireplaces and the outdoor dining area has heaters; it’s a great spot to watch the swans swim in the Imperial Palace moat. I was out of Tokyo for the re-opening party but I will check it all out in the near future. Norman’s always fun and he’s always busy, his big – and I do mean big – project now is planning a series of events pretty much all over the world to help the grand lady, super artist Toko Shinoda, celebrate her 100th birthday (she’s still painting!) on March 28th. More, much more, on that later.

Many friends I’ve talked to the last month or so seem to feel that 2013 will be a year of change. Looking back on 2012, with natural disasters, the war in Syria, unemployment, many economic problems and mass murders let’s hope things do, for everyone, change for the better. From the looks of things there’ll be a lot of changes that are not so big but that will be important for many living here. It’s hard to believe but Roppongi Hills will celebrate its 10th anniversary in a few months; an executive for the big complex told me there’s going to be a lot of renovation and some major changes.

Fans of Illy’s coffee shop there are not so happy, as the popular hangout for foreigners did not renew its four-year contract and it’s already closed. Muji’s light, bright and spacious shop in Midtown is also closed now but from what I hear they will be relocating and I’ll let you know exactly where as well as some other changes around our busy city as they happen.

My sincerest thanks go to the many caring giving people who helped at our 15th charity party at the Hilton.

These included many of the spouses of diplomats and business leaders as well as several others who all took time out of their busy schedules to make it a very special day for the children (what beautiful kids they were) they each paired up with for the party. 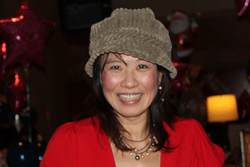 Mona (above) and Matthew Ireton.

Our long-time collaborators include Coca Cola, Walt Disney Pictures, Warner Brothers Entertainment, Sony Pictures, Toho Towa, Paramount Pictures, Lufthansa Airlines, United Airlines, Mercedes Benz, Tsukasa Shiga and Sanrio’s Hello Kitty not only sent gifts for each of the kids at the party, they sent enough to give to all the children at the six participating schools so that students who couldn’t be there that day didn’t miss out.

The Hilton’s Marble Lounge had been transformed into a magical kingdom with a huge Christmas tree, balloons, decorations and a lavish buffet of all the kids’ favorite foods.

It was a day of seasonal music (Matthew Ireton and Mona led the kids in song), great food, making new friends, everyone enjoying themselves and the true spirit of the holidays. Do check out Mona’s website for more on her and I must say, I apologize for misspelling her name in the column this month.

It pretty much ended with the kids and their partners for the day dancing to the music of The Village People’s YMCA, but many of the sponsors and children stayed on well past closing time.

All the kids left with big bags of the kind of stuff kids love and bags and boxes for their schoolmates who couldn’t be there that day, as I said. The kids were really special and many of their partners said they really wished they could take them home.

In closing, I’d like to extend sincerest thanks to a few other friends who helped make it all the big success it was.

Firstly, the members of the Guardian Angels, who acted as interpreters and helped in so many ways.

The beautiful Minami Azabu residence of Algerian ambassador, Sid Ali Ketrandji and his wife Amal, with its marble floors, arched doorways, stained glass windows, fountains and garden is a majestic venue for any event.

It was, as you can imagine, perfect for the celebration of Algeria’s 58th National Day, a special and truly memorable evening in every way. Amal wore a fantastic, custom-made Algerian dress for the occasion and looked like she had just stepped out of an imaginary copy of “Arabic Vogue”. Long buffet tables had been set up in several of the residence’s many rooms and the food offered included many delicious Arabic dishes I hadn’t seen before, as well as Japanese, Chinese and Western favorites. The laid-back atmosphere gave the many guests the opportunity to enjoy legendary Arab hospitality at its best and was perfect for the occasion.

Our Sincerest congratulations to Peruvian ambassador, Elard Escala and his wife on the many special events the couple hosted as part of the celebration of their country’s 191st Independence Day. These included a very successful and enjoyable Peruvian gastronomical food festival at the Hilton Tokyo. They flew four of Peru’s top chefs in, and believe me all four really knew their business. Peru has always been famous for its tourist destinations, its scenery, music and handicrafts. In the past few years, it’s also been recognized for the quality, variety and excellence of its cuisine. In addition to enjoying the amazing variety of food at the opening party I also had the chance to meet many of the Latin ambassadors and their wives for the first time.

There were so many changes in diplomatic corps in 2012. Muchas gracias Elard and Cristina, you’re doing a commendable job of promoting your country.