In Ebisu, along the Yamanote Line tracks. Heck, you could see the platform right out her window,” Gunther mumbled, already three sheets to the wind and about to let loose of the fourth.

“Charlie, you gotta help me find her place, I really wanna see her.”

Drink’ll do that to a man. Goes 15 years without seeing a woman, then suddenly remembers her after sinking enough drinks to get some serious alti­tude. Gets all maudlin about some lady, shared a short-term romance back in the ’80s.

Heck, Gunther’s an okay guy; your regular west Texas German cowboy, drinks Shiner Bock, works for some agency I can’t tell you about. We done projects together here and there the past 30 years. Felt I oughta help him out, so we take the Hibiya Line to Ebisu, pop out by the police box, and Gunther don’t recognize nothin’.

“You sure this is Ebisu, Charlie?” Gunther’s breathing hard, lookin’ this way and that.

“Sure as death and taxes, Gunther. They rebuilt this entire station some years back. Don’t look the same as you knowed it.”

We go ’round the station building and up the hill. The tracks are on our left, way down below. I can see the platform, so from what he says, I know we’re gettin’ close.

“Now, she lived on the sec­ond floor,” Gunther offered. Right. Every damn building along here’s got someone on the second floor. Trouble was, there was damn near a hunnert apart­ment buildings on this stretch, but Gunther said he’d recognize it when he saw it.

After a few “that’s-it!-no-that’s-not-it-that’s-it” fumbles, Gunther finally points to a small building and tells me this is the place. We go up the stairs and fortunately there’s only one door on the second floor.

“You sure, Gunther? Someone named Nakamura lives here.”

“Yeah, that’s it, her name was Naka, Naka…, uh, Naka some­thing,” he said, getting even more confused. I knock lightly, no answer. I could hear people and music inside, so I cracked open the door. Couldn’t believe my eyes.

There was a restaurant inside, a hopping little joint.

I closed the door and looked for a sign, but there weren’t none. Just your regular residential name plaque, read “Nakamura Keita” in Japanese. Well, I’ll be damned.

Opened the door again to take a look-see, set a foot inside. Lots of tables, soft lighting, not too fancy. What caught my eye was a row of awamori urns on a bright red counter. This was some kinda Okinawan speakeasy, and they got more than enough high-octane awamori to float our boats. And plates of Okinawan chow every­where.

“Gunther, this ain’t the place you’re lookin’ for, but it’s lookin real good to me. Let’s get awamori shots and some chow.” By this time, Gunther was slow­ing down and needed a pit stop. We got seats at the big red counter.

Now awamori‘s your Oki­nawan rice hooch, runs 25 to 43 percent, your mileage may vary, and never mind the objects in your rearview mirror. We ordered shots of Shirayuri, the roughest awamori they got, and started lookin’ at the food menu. Wouldn’t you know it — no sign out front, no prices on the menu either. Since Gunther was in a position to expense ‘most any­thing, I didn’t worry. Anyroad, didn’t look expensive. 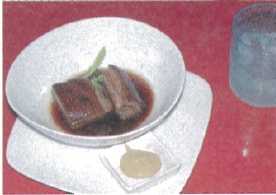 This place was the real deal. Menu had all kinds of native Okinawan stuff, including jimame tofu made from peanuts, tofuyo fermented tofu, and chiragaa, sauteed pig face skin — kinda looks like bacon. Plus a few things that weren’t, like green papaya Thai salad and Portuguese sausage. This’d be the kinda place you’d find in some tall cotton neighborhood in Okinawa.

The food worked wonders on Gunther, calming him down. He didn’t take much to the awamori, so he switched to shikwaasaa beer, regular beer cut with the juice of some sour-bit­ter Okinawan citrus fruit. Got me one, too, cold and sour and good news to a parched throat. Felt real good.

Now Gunther didn’t find that woman, but I found me one of the best real Okinawan joints in Tokyo. Chow was great, so’s the service, plus they got 30 kinds of awamori and six kinds of aged awamori what they call kuusu. Weren’t expensive either — for both of us it ran just under ¥10,000 with drinks.

As we were leaving, Gunther gets clear enough to say “Charlie, I think she lived on the other side of th’ tracks.”