Mixture Bakery is a fixture of Shimokitazawa: the place is filled with regulars, and if you aren’t one already, you may become one.

The friendly and attentive staff, the cozy atmosphere and the neighbourhood feel are what makes Mixture my home away from home. The fact that it only has only five or six tables makes it intimate and assures that it will never get too crowded or noisy. And, all the food they serve, from the takeaway bakery section to the sit-down menu, hits the spot every time.

Most cafes that sell a variety of goods tend to excel at one or two particular items – the ‘Jack of all trades, master of none’ problem – but this is not the case at Mixture. Whether it’s bread, sandwiches, pizza, coffee, pies, tarts or croissants, I can proudly say I’ve tried everything they have to offer, and I’m not tired of my weekly pilgrimage even after a full year. 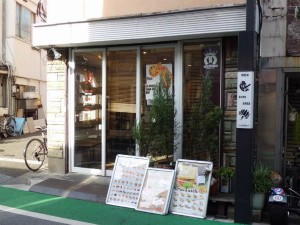 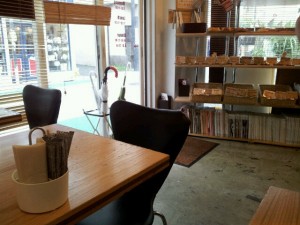 Inside and outside Mixture, on a old-fashioned shopping street in Shimokitazawa, Setagaya

Breakfast lovers, start the day with a slice of famous Espresso Bread, made with beans from Bear Pond Espresso neighbour, or snack on gooey chocolate croissants and cinnamon French toast, with a crumbly, jam-filled rock cake. You can pick up those bakery items for the road, or enjoy them with a cup of coffee at the shop.

Between 7-11am, you can feast on a morning set, a real steal at ¥500 with a home-cooked style simplicity that is hard to beat: a hard-boiled egg, three pieces from the daily bread selection and a – this is the only bit which confuses some at first, a chickpea salad (yes, salad for breakfast – but it works…) with a fantastic, light vinaigrette, along with a drink.

The lunch set consists of a sandwich of your choice, accompanied with a salad, a few pieces of daily baked items, and a drink. I highly recommend the tuna avocado sandwich, or the BLT, which comes with a choice of bread: baguette, ciabatta or focaccia. All those options are available for dinner, along with an assortment of thin-crusted pizzas.

Mixture has a bit of a long history: its current location used to be an established bakery called “Taieido”, opened in 1959 and operated by an elderly couple and their young helper. It closed in 2005 and re-opened under the name of Mixture, as the young man who used to help the couple re-opened the bakery and kept the legacy alive. The current menu has a section called Taieido Series, with breads that look and taste the same as what the old bakery used to sell.

Not surprisingly, Mixture’s long tradition and family-feel is palpable in every aspect, and makes it a homely, welcoming spot. (Vivian Morelli)