“Ay carumba!” I thought. Commandante Ortiz is coming again, and we gotta find a place to take him for dinner. Every year he pays a visit to our Tokyo office to have a look-see at the circuits in our new recon systems. He really doesn’t have to come here to see ’em. Just as easily do that at U.S. headquar­ters. But there’s some reason why he insists on coming to Tokyo each fall. (And I think her name is Sachiko.)

Anyroad, the Commandante is way up in the Spanish Air Force and they’re pretty good spenders at General Strategics. Years back, he and I flew back and forth between Spain and damn near every country on the Mediterranean so’s I could get a better handle on their require­ments in that part of the world. While we were at it, I got a better handle on every good restaurant between Gibraltar and the Golan Heights, since Ortiz is a real wine, women and chow kinda guy.

For some reason, the Commandante don’t like Japanese food. None of it. Not even tonkatsu. So my secretary Kumiko’s been good at finding places what serve Spanish chow. Thing is, he never seems satisfied. Now Kumiko tells me we’ve already hit all the best ones in town. None left worth a hoot. Well there’s gotta be a new one, I insist.

“Charlie, I found a place. It isn’t really Spanish, but they do have a lot of tapas and other dish­es,” Kumiko suggested one morn­ing, adding, “and more Spanish wine than you could imagine.”

“Tapas? Wine? Well then book us a table,” I insisted.

The night of his visit, we pull up to the restaurant, on a quiet corner of Gaien Nishi-dori between Hiroo and the Kasumi-cho crossing. Sure looks nice. Man-sized tables of fine wood, no stupid music. Senor Ortiz goes right for the wine menu and his face lights up. Right away he orders a bottle of some Spanish red wine I never heard of. Glasses land, wine is poured and then Kumiko’s face lights up the same way.

“This is a special wine, and is not easy to find, even in Spain,” he explains. I have a sip, too, and tell him I didn’t know Spaniards made wine like this. Smooth, rich, delicate. 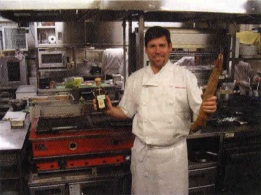 Near the bottom of her sec­ond glass, Kumiko’s already lit up like a Christmas tree when the chief cook comes over, American guy named David Chiddo. “I saw him on TV before,” she gasps, getting all googly-eyed. David’s one handsome fellow.

Senor Ortiz starts asking David about the wine and food, and before we know it he’s ordered pretty much the entire meal. A minute later, a different Spanish wine arrives and Kumiko goes into overdrive. This one stayed on the table long enough for me to write the name down: Cerasuolo. And it was even better than the first one.

Oh, and what chow it was. Not just Spanish, but from most places on the Mediterranean. We get tapas: Organic Almonds and Mixed Spanish Olives, Moorish Grilled Fork Brochettes, Roasted Calimari Stuffed with Prosciutto, Spicy Moroccan Crab Cakes, Spinach and Feta with Sumac and Walnuts. Plus a basket of the house flatbread, and a dish of one of four gourmet olive oils, cost just ¥300 each.

Then we get Chorizo Iberico. Senor Ortiz says its made from pigs what only eat acorns, and that’s why it’s one fine tasty sausage. Two slices and he goes into overdrive.

And more wine, but I am in no condition to write down the name. By this time the Commandante is so lit-up happy he looks like he’s about to start dancing on the table any minute. I’m too busy chowing down -this is some serious food here. Lots of different countries on the table, but one common theme. Everything is fresh, fresh, fresh. Alive. Real. And thoroughly satis­fying.

The whole shebang came to less than ¥10,000 per person, and when Kumiko called for the check, Commandante Ortiz sliced it out of her hand and said “This is all on me, personally. This is not expense account food, this is a meal, my friends, among good friends. I thank you for finding me a—as you say Charlie?—a god­damn good dinner in Tokyo.”