After two days of rain, the weather was perfect for a night hike in Yanbaru National Park, the biodiverse protected area located in the north of the main island of Okinawa.

We began our adventure in a jeep with our guide, taking narrow roads in the middle of the vegetation, driving slowly to admire (and not to crush) the adorable sharp-nosed frogs which were resting on the asphalt heated by the sunny day.

Then the jeep parked. Boots on, lamps on, we started to walk on a small path that goes up to Mount Yonaha. A panel showed us the paths through the mountain while another explained the richness of its fauna and flora, with a photo of a very rare species, the Anderson’s crocodile newt.

The night was dark. Unknown noises reached our ears: nocturnal birds, crickets and sometimes a US army aircraft. Our guide told us that one of the strange songs we were hearing was that of the famous Okinawa rail, a species in danger of extinction. We did not see it, but hearing it filled us with joy.

We walked slowly, looking at the ground, in the bushes, in the trees. Gradually, we started seeing different species of frogs. Some seemed to pose to be admired and photographed. The Ryukyu tip-nosed frog was lovely and stood up straight, elegant with its small, pointed nose. Other specimens — more or less large, more or less colored — appeared under our lamps. The pretty Ryukyu brown frog and the corpulent American bullfrog. Each discovery aroused exclamations of joy, especially the sight of the rare and endangered Ishikawa frog, recognizable by its warty green and black skin. 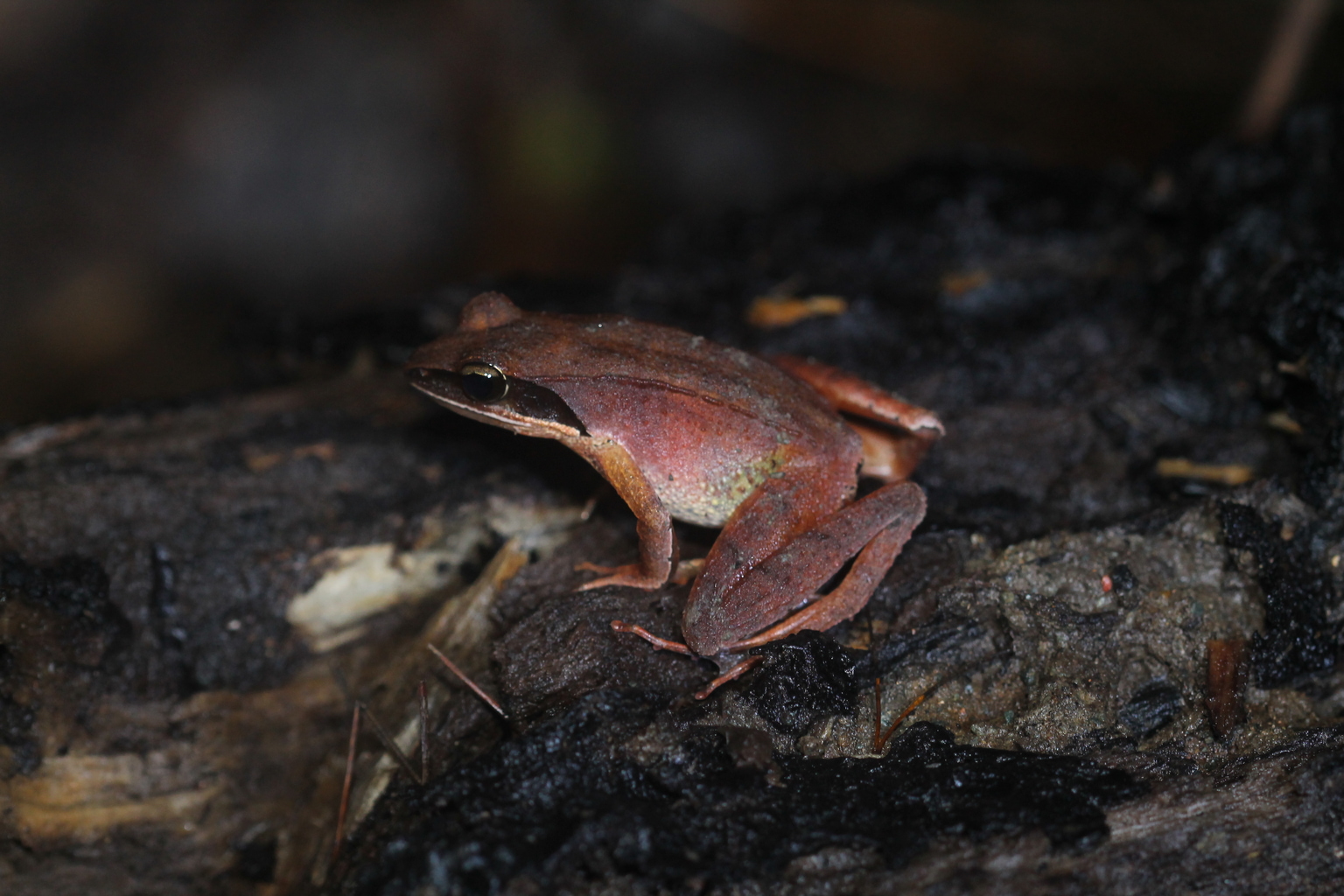 The green leaves of the bushes were sheltering lizards and geckos. These kings of camouflage just opened one eye when our flashlight shone on them. Green, gray, juvenile, adult — we were able to observe several.

Suddenly, we came across a gray-black creature, and we thought we recognized the famous Anderson’s crocodile newt from the photo. It was small, and we weren’t sure. Our guide confirmed that we were very lucky. What happiness to see such a rare animal — happiness mixed with sadness to know that this animal is in danger of extinction.

There were also smaller creatures: spiders and various insects. Yellow spiders stood out superbly from the green leaves; other, bigger ones waited on huge webs woven between trees. Stick insects merged with branches, and we had the pleasure of observing several of them of different sizes and shapes.

Then we started climbing, following a stream. The rocks were more slippery, the mosses that sometimes covered them were like ice rinks. We had to concentrate not to stumble, all the while trying to remember to stop and observe. During this ascent, we came across a very green snake that quickly hid as we approached. The frogs were numerous along the stream, watching us pass without moving, enjoying the humidity of the banks.

When we reached the top, we discovered a pond where salamanders were swimming peacefully. The transparent water made it easy to observe them. With the reflections of our lamps on the water, it was truly magical. We drank some water before starting the descent.

Going back through the places we had already been allowed us to walk more comfortably and to see if the animals spotted before were still there. Indeed, some had not moved from where they had been sleeping peacefully. Others had left; new ones had arrived. Our wonder was intact.

We got back to the jeep and took another road to see if, by chance, a habu (a variety of venomous pit viper) was basking on the road. Unfortunately for us — or perhaps, fortunately — it was a night without habu. Our guide came across them very often, and he seemed disappointed not to be able to show us any. Perhaps this snake that frightened me a little had had the delicacy not to show itself.

Finally, at the end of a small, winding road, the silence of the jungle pierced only by animal cries gave way to the noise of cars and trucks. The city lights dazzled us a little, and we returned to the hotel tired but happy to have been able to admire all the beauty of Yanbaru.