Artist Makoto Azuma sends flowers to space, cyberspace and everywhere in between. The flower artist has become famed for his daring designs and elaborate floral creations. In this exclusive interview, Azuma reveals the thinking behind some of his most acclaimed creations and why flowers are a symbol of peace.

The Most Famous Flower Artist in the World

Type “flower artist” into a search engine and Azuma appears on top, numero uno out of all the flower artists in the internet world. Click through to be confronted by his botanical sculptures —­ maximalist floral explosions against dark backdrops — photographed by long-term friend and collaborator Shunsuke Shiinoki.

Elsewhere, you might be familiar with his work through floral fashion worn by Rihanna, or blooming on the catwalk at Dries van Noten. Or even his “In Bloom” series, “in which,” Azuma says, “flowers are arranged in naturally impossible situations.” The experiment has seen flowers sent into space, dropped from moving planes, set on fire and plunged into the deep sea.

Yet despite all these daring and spectacular feats, Azuma insists his core message is much more down to earth. “I feel that I am pursuing a much simpler concept of the human heart and the flower.”

From the Countryside to the City

Azuma is the subject of Flower Punk, an award-winning documentary by Alison Klayman for The New Yorker. It tells the story of Azuma, from his childhood growing up in the countryside in Japan’s southern Fukuoka Prefecture to his move to Tokyo in 1997, initially with dreams of becoming a musician. He fell in love with flowers while working at Ota Flower Market, as he came to realize their beauty and strength. In 2002, he started his own flower shop, Jardins des Fleurs, with fellow bandmate and florist, Shunsuke Shiinoki.

Three years after opening their store, the pair started pursuing ever more creative interests. Shiinoki was drawn to photography. Meanwhile, Azuma began creating botanical sculptures, testing the possibilities of flowers in new ways. This near-parallel trajectory may explain why the pair’s partnership works so well. As Azuma explains, “He is the one and only person who can instantly identify what part of my work is beautiful […] without having to go to the trouble of putting it into words.” “The original impetus […] was the desire to preserve, in archival form, the flowers that are forgotten after a few years,” Azuma says. This yearning is also evident through his series Block Flowers, which sees specimens of each flower locked into resin, some complete with roots.

These encyclopedias are first and foremost picture books. Each flower is shown in dynamic, blooming arrangements, mesmerizing even to members of our stimulus-heavy society. Each shot captures the flowers in a new light, against a dramatic black background.

“[Shiinoki] talks to the flowers as he shoots,” Azuma tells us, and it seems that the flowers talk back. Each flower within the encyclopedia shouts out defiantly to the reader, clamoring to tell its own story.

In work, Azuma and Shiinoki are a double act ­­— creating, arranging, and then capturing the artworks in a shareable format. They are rarely far from each other, and as we speak with Azuma, Shiinoki is shooting nearby. At one point, he pops in to show us the adorable studio rabbit U-ko, jokingly described by Azuma as “an exceptional staff member.”

While the phrase “floral artistry” conjures up images of pink roses, delicate blooms and pretty white backgrounds, Azuma’s work is anything but. The enduringness of flowers, rarely amplified within the traditional constraints of flower arrangement, is a defining feature of much of his work, which he dubs “botanical sculpture.”

In many of his pieces, the themes of life and death are evident. “Flowers are a symbol of life, and their life span is shorter than that of a human being,” he tells us. “If you don’t understand death, then you can’t think about what you are living for.

“At some point, everything will disappear, and this process is part of the culture of flower gardens and of ikebana. But the beauty of decay is a keyword, if you like. This leads onto the question: how do you express this decay?”

The answer to this question is one that provides much fascination to Azuma.

One of his answers may lie in AMKK’s Drop Time, a time-lapse series which tracks a bouquet from bloom until its subsequent decay. Or maybe even a recent work in Brazil, which involved planting flowers to decompose in “reverse agriculture.”

Azuma’s inability to achieve his ideal inspires him to keep creating. He is driven by an art form that varies depending on external factors beyond the artist’s control.

“Because they are natural things, flowers themselves are not always as we humans want them to be. Things such as music, painting, or sculpture are similar.” Testing the Limits of Flowers

Azuma has spectacularly tested botanical sculptures with all the five elements — from water in “Botanical Sculpture × In Bloom project — Sea #1,” which saw flower sculptures taken down to the sea bed near the subtropical Ishigaki Island, to fire in “Burning Flowers,” where a 3-meter-high botanical sculpture was set alight in Tochigi Prefecture.

Each project, while definitely extreme, is designed to enhance a natural beauty. “Flowers are beautiful things that already exist in nature, so instead of imitating nature, I need to express a different kind of beauty,” he explains. “I try to create artwork that enhances the unknown beauty of flowers and the value of flowers by placing them in extreme places where there are [none].

“In every environment, flowers give us more expressions and discoveries than we can imagine. They can radiate beauty in ice or in space without losing their color, they can flexibly adapt to underwater water pressure and ocean currents, and they can lose their moisture in scorching hot earth and still be beautiful.”

For Azuma, it goes without saying that flowers are most beautiful in their natural habitat, but his work shows the transformative nature and scope of this beauty, pushing its boundaries ever wider.

“No matter where they were at their best,” he continues, “flowers always continue to show us their own beauty, strength, and potential.” Sharing With the Community

While some works by AMKK, such as “EXOBIOTANICA #2: Space,” draw the most attention, the majority of its work is much more accessible — literally. Past locations have included train stations, city centers and shopping malls. These are all chosen to exhibit botanical sculptures “in places where many people gather.”

For each exhibition, Azuma makes sure he’s there until the end when the work is taken down and turns the remaining flowers into bouquets that are given away for free.

“The process of dismantling the sculpture itself is also an expression of the artist’s installation,” he says, “even Rihanna’s headpiece.”

Azuma is keen to emphasize the community aspect of his botanical sculptures. He tells us how he has been trying to return to Ukraine since his last visit in 2019. “I think it is a very important ‘mission’ to make flower sculptures and distribute them amongst the people to lift their spirits. There is a meaning within flowers, and they can do things such as bring peace and courage.”

He highlights the importance of flowers throughout human history. “Flowers are something that will always accompany people from birth to death. There are definitely flowers at weddings […] and at funerals. Even after people die, we put flowers on their graves.” Flowers to Bring Peace and Remembrance

Each year, Azuma visits Hiroshima and Nagasaki, which were devastated by atomic bombings during World War II. There, he lays floral arrangements on each memorial site, something he feels is his duty as a florist.

“Hiroshima and Nagasaki are symbolic places for Japanese people to think about peace,” he says. It’s telling that feels strongly about this aspect of his work. He continues to do this, every year, with minimal publicity.

While his involvement with Hiroshima and Nagasaki could be perceived as political, he insists that’s not the case. “I don’t say ‘Let’s take the flowers!’ as a political statement. I don’t think like that. Rather, I think it’s an opportunity for everyone to contemplate the idea that peace is a good thing.”

This subtle act of “protest” is more befitting to the language of flowers themselves, he says, and suggests that perhaps that’s why his studio has been able to reach so many people globally. 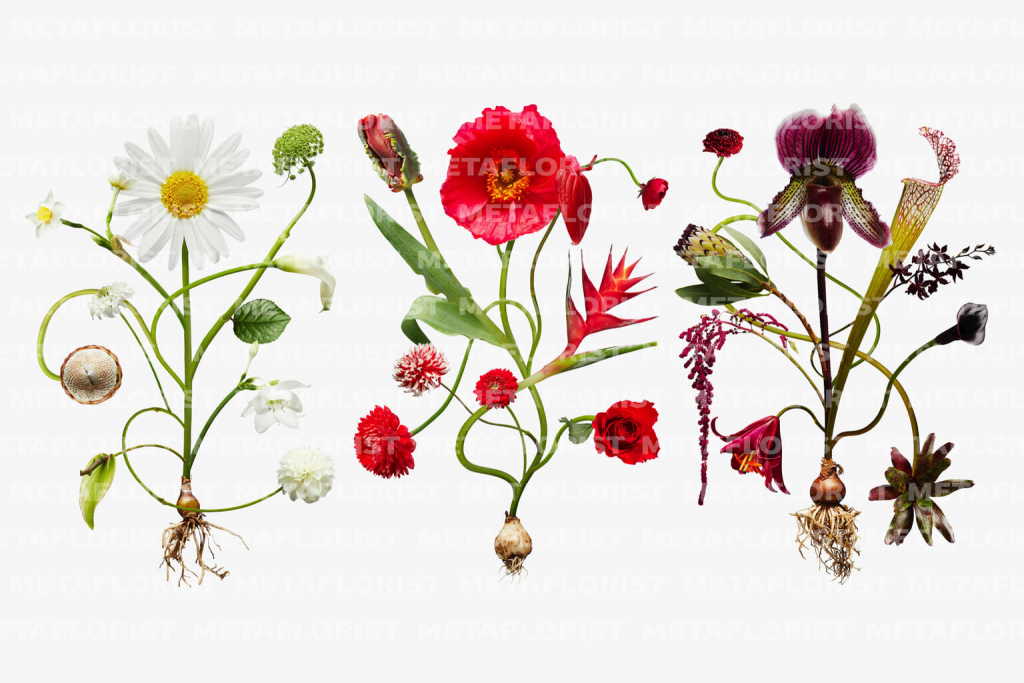 For AMKK’s forthcoming projects, it has recently started x-raying flowers, and producing time-lapses to illustrate the life cycle of a flower. While each time-lapse lasts around 20 seconds, producing them, Azuma says, takes around three weeks or 70,000 pictures.

He is also focusing on where to take flowers next — Web 3.0. Through a project called “META FLORIST,” the Azuma Makoto Flower Center sells its own flower NFTs. These are released through periodic “drops.” Each drop contains a limited number of new NFT flower artworks, with the latest selling out within a week.

“The goal of this project is to create the future of floristry, where everyone in the world can give flowers to each other in a sustainable way,” Azuma explains. He is conscious of the implications of sustainability and waste related to being a flower artist, emphasizing how the studio only buys flowers to order, never surplus.

Azuma says society has changed since he first began his career as an artist over 25 years ago. Now he feels more able to communicate his thoughts directly, ready to take on political and social causes through his work.

“Since ocean issues are a topic now, I would like to create a work on the theme of the ocean.”

Yet despite his experimentation with the latest technology, through his artwork he admits that he still prefers flowers in real life, after all.