Airplanes arrive on the sea, on the brink of the Chita Peninsula, a backwards J curling south from Nagoya. And halfway down it, there is a small city facing the gentle blue waves of Ise Bay, staring out at Chubu Centrair International Airport and the distant mountains of Mie Prefecture. It’s a fairytale village buried in gentle hills, the pottery town of Tokoname. Tokoname was a center of Japan’s ceramics industry for nearly 1,000 years, even mass-producing clay pipes and tiles used all around the nation during Japan’s period of modernization. The only signs of those coal-smoke days, however, remain in the ruins of a few tall chimneys, battered monuments surrounded by collapsed furnaces and buildings overgrown with grass and flowers. These remnants of the past now clad the town: the narrow alleys and hidden groves that pockmark Tokoname’s historic heart feature enormous ceramic pipes studding steep walls. Meanwhile, the old brick kilns, rickety houses, hidden corner gardens and sleek modern homes all feel like they’re drowning in earthenware: decorated tubes, toilets, fanciful jars and bowls, cutesy cat statues, ogling frogs, chipped fragments.

“There is a culture of craftsmanship in Tokoname,” says Yasuhiro Oguri, an archeologist and curator at the Tou no Mori Museum. “I see the artisans working now as the same as the people who worked here 1,000 years ago. Tokoname is constantly giving rise to the new.”

This is a town that exists in between life and death, birth and rebirth. Wandering its famous Sanpo no Michi (walking path) today, among crumbling ruins of the past you will find third-generation potters, experimental artists and independently owned cafés. The wind whirling through the narrow streets brings scents of sea breeze, kiln fires and moist clay. 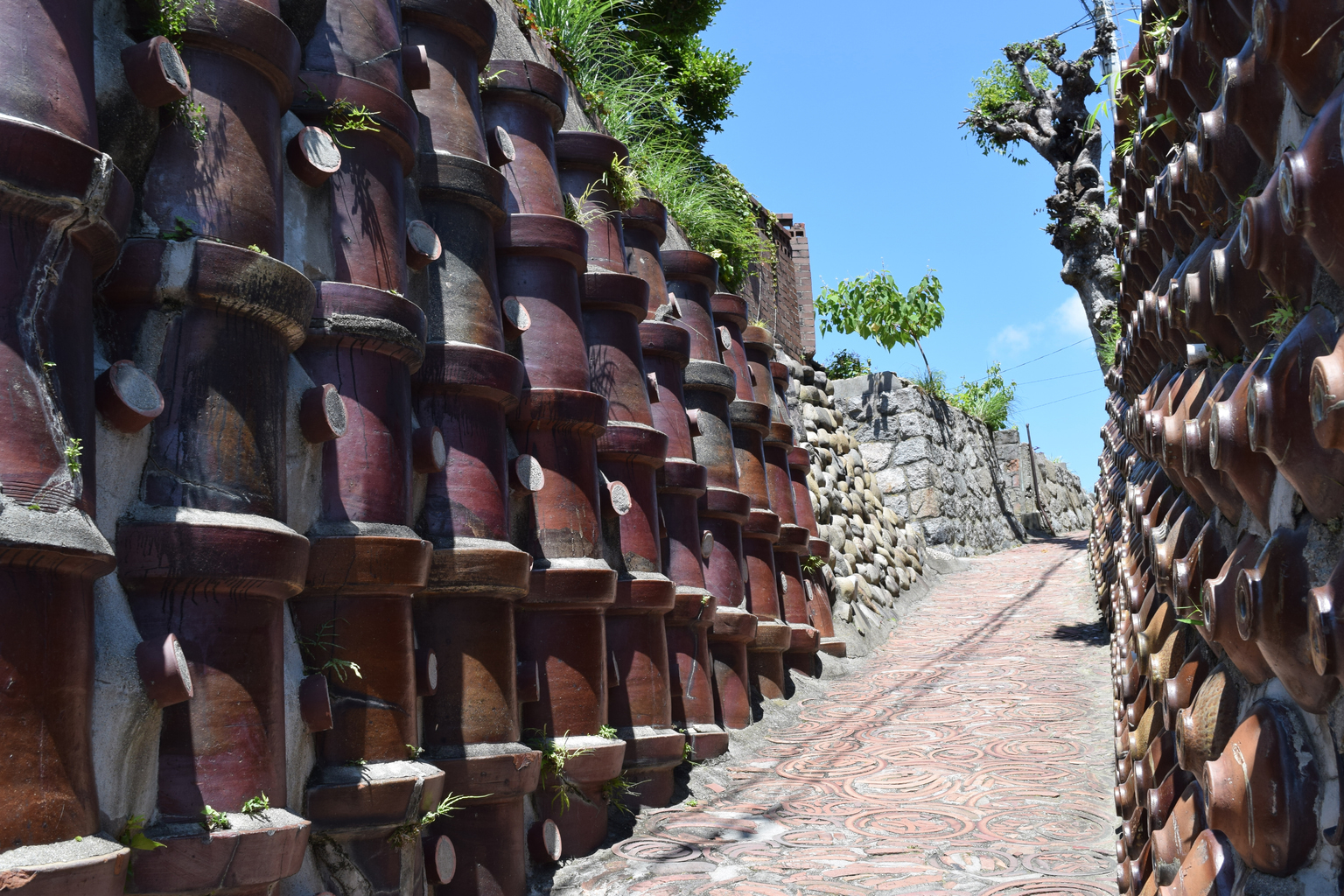 “Tokoname-yaki (Tokoname-style ceramics) has changed over the eras as it has adopted techniques from China, the West and so on,” says Toshifumi Sugie, owner of Morrina, a pottery and crafts boutique. In the back of Sugie’s minimalist, sleekly furnished store, he displays a treasured piece of representative Tokoname clay from each of the Heian, Edo, Meiji and Heisei periods: a dish, teapot, industrial pipe and plate respectively.

Tokoname became a center of ceramic production in the 12th century, as pottery shifted from Sanage in eastern Nagoya southwards to Tokoname and northeast to Seto another town in Aichi Prefecture famed for its ceramics. The Chita Peninsula is particularly well-suited for pottery because of its high-quality clay, its gentle hills that proved ideal for digging old-fashioned kilns and easy access to water for transportation.

Oguri says that no one knows exactly why pottery production moved to Tokoname. But by 1300, a new technique for ceramic production called himo-zukuri was invented in the town. It involves coiling rope-like pieces of clay on top of one another and its rapid spread across Japan influenced the rise of Tokoname into the Edo Period. When new kiln technology from Europe was introduced in the 19th and 20th centuries, Tokoname began using mold-making to mass produce ceramic pipes and tiles. Thus began the stage of Tokoname’s history as a key source of Japan’s industrialization.

However, this industry could not survive the change it brought about. There used to be more than 400 kiln chimneys. Today, only a few remain.

“By the 1960s, Tokoname was covered in pitch-black smoke from all of the coal burning,” says Oguri. “When new environmental regulations emerged in the 1960s and 1970s, almost everyone had to quit the industry in Tokoname.”

As a result, city leaders came together to create the Sanpo no Michi, in order to preserve the once-flourishing manufacturing townscape. Since then, the modern Tokoname has emerged. Now as a key destination in central Japan, clay artisans continue to pass on their techniques, making a living off of the tourist industry. The Rise of Tourism and the Future

The city has had to lean hard into tourism to preserve its history. Fortunately, Tokoname has a thriving scene of independent artisans and entrepreneurs to support it. Hotaruko gallery owner Tadashi Koike sells his own crafts along with those of some 40 plus local potters. The old wooden house, sitting right across from a rare, preserved ‘climbing kiln’ in the center of the Sanpo no Michi, is overflowing with clay: teapots, quirky utensils, rustic bells, animal statues and Koike’s personal specialty, ojizosan. These adorable Buddhist deities are a traditional craft recognized as the patron saint of children.

“I make them with a very gentle temperament and take pride in giving each one unique features,” says Koike. “They’re for protecting new babies and helping them to grow up strong.”

Many of these artisans come from multi-generational families of potters. Fumii Watanabe is the third generation of Watanabe potters. Located just down the street from Hotaruko, today they sell wabi-sabi style dishware and offer hands-on pottery experiences.

“I started running the store with my father when I was 26,” says Watanabe. Traditionally, the Watanabe clan exclusively made and sold bonsai pots, but bonsai lovers decreased throughout the Showa Period, encouraging Watanabe to change the business model in the 1980s. “I’ve expanded my range to make objects of all types and sizes,” he says. “The ceramics experiences and dishware are most popular nowadays.”

Tokoname Tourism Association representative Hiro Tomita says that due to diversification of hobbies in Japan, traditional uses for Tokoname ware like tea ceremony and bonsai cultivation have declined. But rising foreign interest in Japanese culture has stepped in to fill this void:

“Tokoname exports many kyusu teapots and bonsai pots abroad [now],” he says. “The opening of Chubu Airport has been indispensable for the growth of Tokoname and will continue to be moving forward.” Café Culture and Losing Yourself in the Alleyways and Parks

It’s not just ceramics galleries that carry on the creative impulse of Tokoname. Independent cafés, restaurants and off-beat boutiques also thrive. The sophisticated Sugi Cafe located just beyond the bakeries, studios and galleries of Kurafutoya Alleyway, is the perfect example. Located on the second floor of a preserved home, Sugi Cafe doubles as a camera and photography gallery, offering plush couches, a moody ambiance and an excellent classical record selection.

Owner Munehito Sugisawa moved to Tokoname a decade ago and when a vacant property opened up, immediately seized on the chance to create his ideal café.

“When I first visited Sanpo no Michi, I loved the atmosphere of getting lost in an older Japan,” he says. “Nowadays, it’s so much fun to lose yourself in the streets of Tokoname and try to find your own favorite café.”

Another local favorite is the rustic footbath café, Ore no Kin no Yaki-imo. Featuring a gorgeous outdoor garden with a sakura tree, nothing beats sitting under the pink blossoms in early April, feet relaxing in a footbath made of Tokoname clay, enjoying the signature piping hot and honey-glazed fried sweet potato. Also to be found within striking distance: chirashi-zushi at Tokoname-ya, quirky, colorful statuary at the Daisuke Hayashi Art Gallery and countless other local spots. And all this is simply to explore Tokoname’s independent scene. There’s the Tou no Mori Museum, with its precious clay artifacts and digestible exhibit on the history and production process of Tokoname clay. Not to mention Tokoname’s brand-name attractions in the form of the famous Tokonyan, the city’s giant guardian cat statue, the Inax Museum, combining six museums and galleries that display everything from decorative tiles to terracotta architecture, Mentai Park Tokoname, a theme park all for cod roe and impeccable orange sunsets at palm-lined Rinku Beach. The museums all have excellent English descriptions, as well.

Tokoname’s true charm lies in the sense of discovery as you stumble across its green and bronze alleyways, uncovering beautiful art and craftsmanship at every turn. The coronavirus pandemic has meant hard times for locals: Koike has both lost business from reduced numbers of tourists and opportunities to offer workshops as a visiting instructor. But artisans and creatives preserve the spirit of Tokoname with the hope of extending 1,000 years of creation just a little longer.

“Everyone from children to adults can try out the traditional crafts experience,” says Watanabe. “Making ceramics isn’t easy, but people who love pottery give it their all. I’ll be happy if I can have just one person take up an interest and decide to make Tokoname-yaki themselves.”