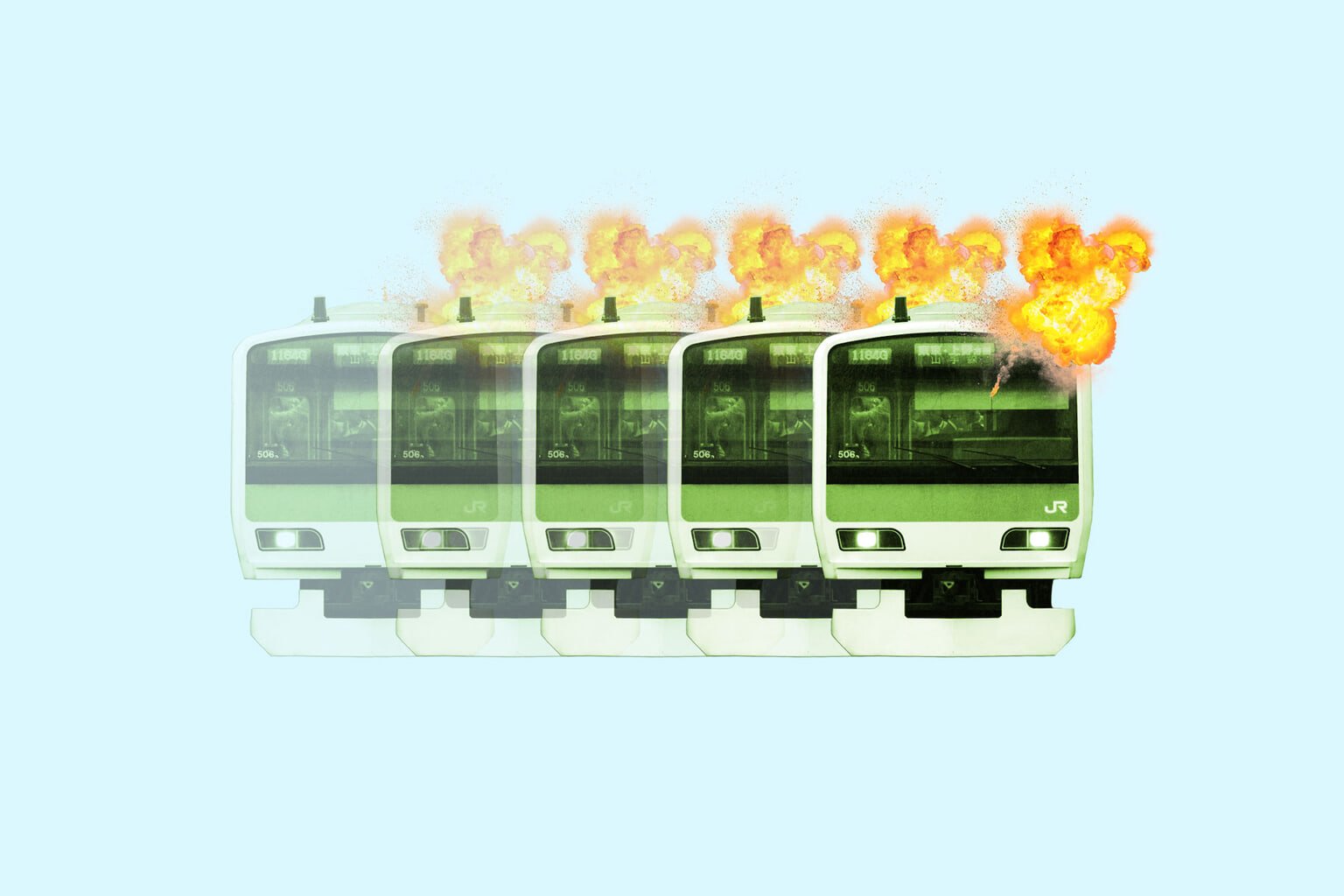 Japan is a country known for its low crime-rate. The incident on the Keio Line last Sunday, therefore, came as a shock to many. It was the second time this year that a criminal wielding a knife caused havoc on a train in Tokyo. Perpetrator Kyota Hattori, who stabbed a 72-year-old man and set fire to a carriage, told police he was influenced by the rampage on the Odakyu Line in August. The worry now is that further copycat attacks on Tokyo trains will follow.

Sunday night’s stabbing and fire on the Keio Line overshadowed the Lower House election. While there were no major surprises, some high-profile politicians suffered losses leading to resignations. There was good news this week for business travelers as plans are reportedly being put in place to reduce the quarantine period from ten days to three. In horse racing, Japan’s famous tongue-twisting filly Sumomomomomomomomo won her first race. And in football, Kawasaki Frontale lifted the J-League title again.

At around 8pm on Sunday Kyota Hattori boarded a Keio Line train bound for Shinjuku. Shortly after the train departed Chofu Station, he took out a knife and some pesticides from his bag. A man in his seventies, who asked the 24-year-old what he was doing, was then stabbed in the chest. It left him fighting for his life. The assailant subsequently started chasing after other passengers while splashing around lighter fluid. 16 people suffered from throat pain related to the smoke and other mild injuries.

Video footage showed several passengers desperately fleeing their carriage as smoke filled the train. Some were seen escaping out of windows as the doors didn’t open (due to the train making an emergency stop away from the designated position and staff deciding not to open them manually for fear of passengers falling on to the tracks). Following a meeting on Tuesday, the transport ministry ordered companies to promptly open doors in an emergency, even if train cars aren’t stopped at the right place.

“I wanted to commit mass murder and be executed,” Hattori said to the police. He decided on Halloween as he knew many people would be out and wore a purple suit as he was inspired by the Joker character from Batman comics. He was also influenced by the train rampage on the Odakyu Line in August. “I heard (the suspect) had trouble with salad oil and couldn’t set it ablaze. So, I splashed lighter fluid around and started a fire,” he reportedly told investigators.

Police presence at stations in the capital has risen since the Odakyu attack in the summer. Following this week’s train crime, it’s likely to increase further. On Tuesday, more than 20 officers took part in a drill at Shinjuku Station. They had to deal with a scenario involving two unruly men brandishing knives near a ticket gate. Looking ahead, police authorities intend to work more closely with railway operators. However, with thorough security checks impractical at stations in the capital, there is only so much they can do.

Japan’s ruling political party secured an absolute stable majority in the first Lower House election of the Reiwa Era. Though falling short of the 276 seats it held previously, the Liberal Democratic Party (LDP) won 261 of the 465 seats in the powerful chamber. Its coalition partner Komeito, meanwhile, secured 32 seats, three more than last time around. “It was a tough election, but the outcome shows the will of the people to task my government with shaping the future of this country,” said Prime Minister Fumio Kishida.

The LDP performed better than many had expected, but it wasn’t all good news. The party suffered a number of high-profile losses, most notably Secretary General Akira Amari. He was defeated by rookie Constitutional Democratic Party of Japan (CDPJ) candidate Hideshi Futori in the Kanagawa No. 13 district. Despite gaining a seat in the Lower House through the proportional representation section, he decided to step down as the party’s second in command. He’ll be replaced by Toshimitsu Motegi, the current foreign minister.

Amari wasn’t the only one offering his resignation following the election. Yukio Edano, leader of the CDPJ, announced that he will walk away from his post after a special parliamentary session on November 10. While his party retained its position as the largest opposition, it disappointingly lost 13 seats. “My inadequacy is the reason this happened,” he said after the result. His decision led to the hashtag “edanoyameruna” (Edano don’t quit) trending on Twitter. A successor will be selected by the end of the year.

The biggest climber in the election was Nippon Ishin no Kai (the Japan Innovation Party) which tripled its share of seats. The Kansai-based right-wing populist party is led by Osaka Mayor Ichiro Matsui, though it’s deputy chief Hirofumi Yoshimura who appeals most to the masses. The man who also serves as Osaka governor has a pop star-like status in Japan with more than one million followers on Twitter. Both he and Matsui have been openly critical of the government and don’t intend to form a political alliance with the LDP.

According to the Nikkei Daily, Japan is planning to shorten the quarantine time from ten days to three for fully vaccinated businesspeople arriving from overseas. To qualify, travelers need to have received one of the three vaccines approved in Japan: Pfizer, Moderna and AstraZeneca. This means the 15 million Americans who had the Johnson & Johnson jab, as well as a huge number of Southeast Asians who received China’s Sinovac or Sinopharm doses, must still isolate for 14 days as is the rule for unvaccinated entrants.

Foreign students and technical trainees are also expected to be allowed into the country again. Schools and firms who accept them, though, will be required to report in advance of their planned movements in Japan. They will also be asked to provide details on how they are being supervised to prevent the virus from spreading. Japan will continue to limit the number of foreign nationals allowed in per day. However, the current ceiling of 3,500 is likely to increase to 5,000 by the end of November.

It’s a name the public love but one that commentators dread seeing line up to race. Cult hero Sumomomomomomomomo enjoyed her first victory this week. Inspired by the manga series Sumomomo Momomo: The Strongest Bride on Earth, the name comes from the Japanese tongue twister: Sumomo mo momo, momo mo momo, sumomo mo momo mo momo no uchi. It means plums are peaches, and peaches are peaches, and plums and peaches are both types of peaches. Fortunately for race callers, 18 characters is the maximum length for racehorse names.

In football this week, Kawasaki Frontale secured their fourth J-League title in five years. A 1-1 draw with Urawa Reds gave them an unassailable 13-point lead with four games to play. They were greeted with polite clapping at the end of the game as cheering and singing is still banned in stadiums. In the Europa League, Kyogo Furuhashi netted again as Celtic defeated Ferencvaros 3-2. Daichi Kamada also hit the net in Eintracht Frankfurt’s 2-1 win over Olympiacos. Junya Ito, meanwhile, impressed in Genk’s 2-2 draw with West Ham.