Architecture in Japan, and Tokyo architecture in particular, has always been shaped by an intersection of constraints. Earthquakes, typhoons, floods, lack of space, and potential longevity, are all major concerns that must be taken into account when building, sometimes resulting in creative solutions.

Tokyo, in regards to architecture, is a relatively young city. The city faced the Great Kanto Earthquake and subsequent fires in 1923, and then the single most destructive bombing raid in human history during World War II. Tokyo’s constant state of renewal has allowed it to both follow and lead architectural design trends throughout the 20th and 21st centuries. It’s hard to say which Tokyo buildings are the most famous or most beautiful examples of Tokyo architecture, but the ones selected here are emblematic of the architects who built them, and the modern global capital in which they stand. St. Mary’s Cathedral was finished in 1964 and was the site of Kenzo Tange’s own funeral in 2005. The cathedral is clad in shiny stainless steel that provides a uniform look free of the ornamentation you might find on a more traditional cathedral. Unlike the works Tange designed during his time as the leader of the Metabolist architecture movement, which feature many repeating geometric shapes and flat planes, the cathedral features more organic looking sweeping curves which are said to recall the lightness of a bird’s wings. The structure’s concrete interior is also without any structural ornamentation, but the way light plays with the eight concrete interior walls is magnificent and impressive. Photos are not permitted inside, but the interior of this building is what truly makes it a special work of architecture, and a place of worship in more than one sense. 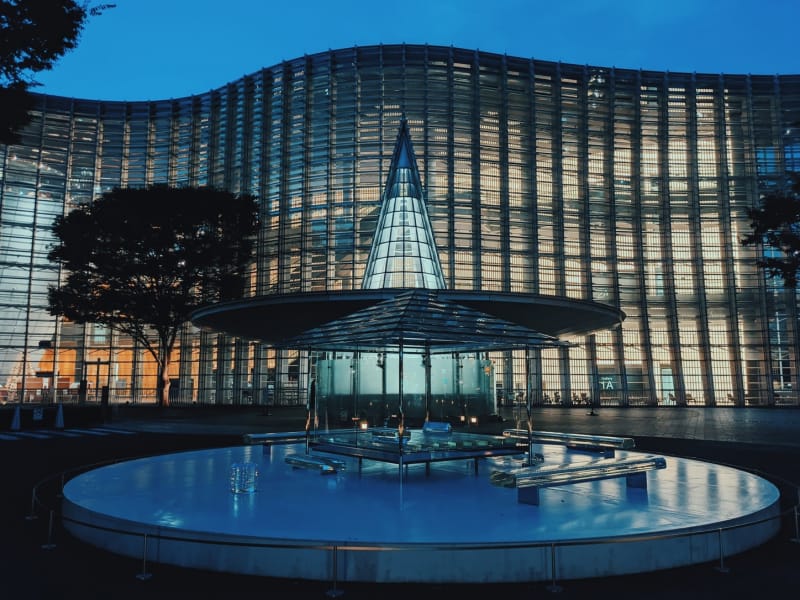 The organically flowing facade of The National Art Center in Roppongi contrasts starkly with the mechanically repeated geometric forms of Kisho Kurokawa’s most famous work, the Nakagin Capsule Tower; however, both structures explore some of his key architectural concepts. His focus on using materials in their natural form, and having buildings that change or adapt to their surroundings are both featured in these two buildings. The National Art Center’s main atrium is designed to feel open with the lively streets of Roppongi that surround it, but also connected with nature as the surrounding trees grow tall and stretch over the museum. The National Art Center can be easily visited, while the Nakagin Capsule Tower is a private residence so it can only be entered through a booked tour. Both are great examples of Kurokawa’s work and Tokyo architecture spots worth visiting. This sleek Tokyo architecture spot is a great example of Tadao Ando’s way of creating unique but unobtrusive works that consider the natural environment and light as critical aspects of design. 2121 Design Sight, located in Roppongi near Kurokawa’s National Art Center, is made of giant steel sheets that slope gently into the ground, so the building manages to blend into the surrounding park. Most of the volume of this design museum is located underground to preserve the look of the park. Like most of Ando’s works, the form is simple and clean, and light plays a large role in the overall design. I chose two works by Kengo Kuma to highlight his transition as an architect. These structures are only about ten minutes away from each other by bicycle, but they represent the dramatic change Kengo Kuma’s style has made since 1991. The M2 building is an almost grotesque postmodern Frankenstein monster of concrete, steel, and glass. It is saturated with contrasting architectural styles and superfluous aesthetic elements. The giant roman column in the center is anything but structural, and the artificially damaged concrete is particularly unnecessary. Kuma admits to being embarrassed by some of his works, and I can’t help but think of the M2 building as an example of one of those works. The 120×120 Forest is then, like his Tokyo Olympic Stadium design, a representation of his current approach. Kengo Kuma prefers natural materials to play with light and shadow. This small wooden home is aesthetically consistent and simple, but is still very representative of his style. The name comes from the cypress columns with a cross-sectional dimension of 120×120 used for the building. Kuma believes that wood will be the dominant material of the 21st century, and his work shows that. Despite being a home, the 120×120 Forest is open to the public, as it is part of a home-building showcase. For those who cannot visit it in Tokyo, there is also a VR video of 120×120 Forest. Cycling 45 minutes to see a public toilet isn’t something I thought I’d ever do, or enjoy doing, but seeing Shigeru Ban and Associates’ public toilet outside of Yoyogi Park in Shibuya Ward was a real pleasure. The facility is fun and playful while providing real improvements to functionality. The toilet facility is made of multicolored translucent glass that becomes opaque when locked. This allows for anyone to see into the facility to see if it is clean and safe, or not, and it also puts some responsibility on users to keep it clean. If you make a mess, it will be immediately apparent when you unlock the door. This facility might not be as innovative and important as Ban’s recycled paper structures which are used for temporary evacuation shelters, but it does offer a fun experience to an otherwise routine activity. Opened in 2020, the transparent toilet is part of a bigger project in Shibuya Ward called The Tokyo Toilet Project, with 16 prominent architects from Japan and the rest of the world designing unique toilet facilities.

What’s your favorite Tokyo architecture spot? Let us know in the comments.