The Meiji Jingu Story: Creating a Sustainable Ecosystem in Tokyo

People often assume that a city the size of Tokyo could be nothing more than a concrete jungle. However, the shrine forest of Meiji Jingu challenges this assumption with an area encompassing 700,000 square meters of lush flora. It offers a place of tranquility, recreation and relaxation right in the center of the ever-busy capital.

Since ancient times, the Japanese people have had a strong relationship with nature, believing that deities come down to earth from the tops of tall trees and that their spirits dwell in plants, trees, water, stones, and other natural objects. Shinto shrines are built to offer respect to these deities and the sacred forests that surround these shrines are carefully protected. Forest surrounding Meiji Jingu started about 100 years ago when the citizens of Tokyo asked the government to build a Shinto shrine in Tokyo rather than a grave to commemorate the virtues of and offer veneration to the recently passed Emperor Meiji. 120,000 trees representing 365 different domestic species were donated by people from all over Japan and planted by 110,000 volunteers. Previously marshland, farms, and grassland, a shrine forest composed primarily of evergreen broadleaf trees such as oak and camphor was created.

The planners were painstaking in their consideration of creating a natural setting appropriate for the majestic shrine buildings. The gravel-strewn paths symbolize purification and the tree canopy towering above envelops visitors, creating a feeling of serenity. Created as the first ‘eternal forest’ in Japan, the planners decided that it must regenerate itself without human intervention and that the dominant trees should be adapted to the climate and the soil type, resistant to smoke pollution from steam trains of the then-new and nearby Yamanote Line, and able to grow naturally without maintenance. Urban forests are essential environments for humans and bird wildlife as they provide at least 30 times more surface area than the same area of grass and significantly promote water conservation and air quality while reducing noise pollution and energy consumption. So on your next visit to the famous Shinto shrine, take it all in with new appreciation for this pocket of fresh air that was possible thanks to the work and passion for nature of Tokyo’s previous generations of citizens.

The original article was written by Danielle Rippingale and published in April 2009. It was last updated by TW staff in February 2021. 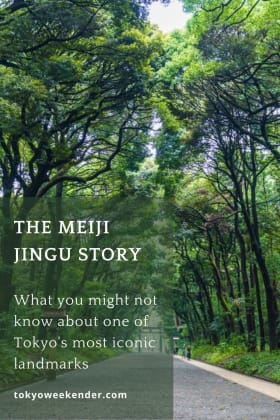