The Race for 100% Zero Waste: Inside Kamikatsu’s Zero Waste Center in Tokushima

Kamikatsu in East Tokushima made headlines across the world for its zero waste goals. We went to the mountain town’s Zero Waste Center to get to the bottom of things.

From a bird’s-eye view, “Why,” Kamikatsu’s famed recycling facility and zero waste center, looks like a question mark. The recycling center and related facilities curl into a semi-circle with a tail, while the newly constructed Hotel Why serves as the question mark’s dot. This place serves as a gathering point where townspeople drop off recyclables, leave things in the swap shop and occasionally use the laundromat and café. But this project has never been just about the locals: from the very start Kamikatsu’s vision has been to raise awareness across Japan and the world about creating more sustainable living practices. A Zero Waste Society Almost 20 Years in the Making

Kamikatsu was the first town to introduce a nine-category separation system in 1997, which rapidly increased to 35 categories by 2001. In 2003, the town declared its goal to become a zero waste town — with 100% of its waste recycled — by 2020. Changes to the system in 2016 created a total of 45 categories, and a zero waste accreditation program for local businesses was initiated.

As of fiscal year 2019, Kamikatsu recycles 80.7% of its waste — any more is impossible at this point, says Zero Waste Center operation member Hiroki Tamura. He says, “At this point, we’ve reached a stage where our efforts aren’t enough. Some things, like zippers, can’t be completely separated, and thus can’t be recycled. The next step — which we’ve already taken — is to educate manufacturers of the benefits of sustainable practices, and cooperate with them and universities to create more sustainable practices for the future. We can’t reach our goals if the industry as a whole doesn’t change as well.” Recycling — A Way of Life

Tamura is a so-called “u-turnee,” who returned to Kamikatsu after a stint in Aichi, where he became familiar with a company that started charging for plastic bags from 2009 — more than 10 years ahead of the rest of the country. For him, that aspect of more sustainable living was already in place when he joined Big Eye Company, Ltd, the company that runs the recycling facility. When asked how he and other townspeople had adjusted to the strict recycling rules, Tamura says, “People’s habits have changed a lot since the system began. They used to — like a lot of places in rural Japan — burn their trash in their garden or dumped it in an area nearby.” “Personally, it has made me more aware of my consumption habits. I don’t buy anything with complicated packaging if I can help it. For example, I prefer the taste of Pringles but I have to separate the packaging into four different parts when I recycle it. Chipstar only takes two, so I buy that instead,” he continues.

Though Kamikatsu and its 1,500 residents are only a small portion of Japan’s population — and an even smaller portion of the world at large — the town believes its proactive approach will continue to inspire people around the world to think about their daily practices and how they affect the environment around them. The Kamikatsu Life for Visitors

Only Kamikatsu residents are allowed to use the waste station, but visitors can take study tours to see how it works. They can also pick up items to take home at the Kuru Kuru Shop, a swap shop at the center where residents drop off household goods and appliances that can still be used. Items must be registered and weighed before they can be taken home, as the center records everything. Kuru Kuru moves about 500-1,500 kilos of goods every month, totaling an approximate of 10 tons annually. Hotel Why, opened in May 2020, is the latest effort to encourage outsiders to learn about recycling through experience. The octagonal building, as with the main recycling facility, is constructed using mostly leftover lumber and reclaimed waste like spades and bicycle wheels. There are no disposable toiletries — guests bring their own toothbrushes and amenities — or nightwear available. There is a study tour on check-in and guests can test the town’s strict recycle separation for themselves at checkout. Check out these zero waste accredited facilities in Kamikatsu

Learn more about Kamikatsu and other destinations in East Tokushima at east-tokushima.jp/en 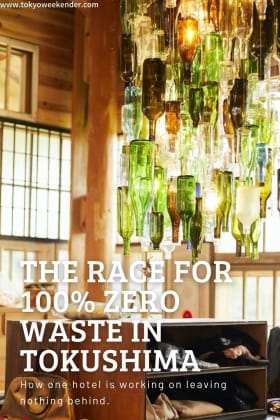