Kagurazaka is a Tokyo neighborhood with a deep historical significance

Developed along the outer moat of Edo Castle, Kagurazaka has a long history as an Edo Period geisha district and a popular entertainment hub. These days, the neighborhood is an exquisite blend of European and Japanese sophistication – though remnants of the castle and the area’s halcyon days can still be found – that demands eating, drinking and shopping be enjoyed at an appropriate, leisurely pace. The tree-lined Kagurazaka-dori is the main artery of the neighborhood, with boutiques and specialist stores oozing quality along its route. Heading up the hill from the river, enjoy alfresco dining on the boat deck of Canal Cafe, grab an area-exclusive Peko-chan-shaped obonyaki from Fujiya Iidabashi-Kagurazaka, or a fresh, steamy nikuman from the long-standing Gojuban. Inhale the enticing aroma of hojicha being freshly roasted and browse blends of tea sourced from across Japan at Rakuzan, or pick out a stylish souvenir (that you’ll likely want for yourself) at Noren.

For something a bit more fun and quirky, The Shop Called the Cat Post Office is chock-full of cat-related knick-knacks in a space barely big enough, erm, to swing a cat. Although the origin of Akagi Shrine stretches back to the 1300s, 2020 sees the 10th anniversary of its contemporary facelift by Japan’s favorite architect, and local resident, Kengo Kuma (also responsible for revamping the nearby multipurpose La Kagu building). The shrine’s renovations include a new main building featuring a more open design using glass, latticed wood and steel-plate roofing. There’s also a courtyard café, and if you’ve ever wanted the opportunity to live within the grounds of a shrine (and not as a priest), a slick, aluminum-framed apartment complex.

Shrines and temples of a more traditional variety can also be found around the area. Notably, the red-lacquered Bishamonten Zenkokuji located at the crest of Kagurazaka-dori, and across the river near Iidabashi Station, Tokyo Daijingu. The latter is considered one of Tokyo’s top five shrines, and as the site of the first Shinto wedding ceremony in 1900, sees a steady stream of visitors looking for luck in love passing through its gates.

Another notable building that reflects the neighborhood’s cosmopolitan character is the English-Japanese fusion building of the Ayumi Gallery. Constructed in 1953, it was designated as an official cultural property by the Japanese government in 2011 and serves as a free-to-enter exhibition space. One thing that Kagurazaka is not short of is French restaurants. Thanks to the large contingent of French residents (in part due to nearby schools and the Institut français du Japon – Tokyo, which regularly hosts cultural events and exhibitions), Francophiles have plenty to indulge in around the neighborhood.

For some affordable Michelin-starred fare head to Lugdunum Bouchon Lyonnais and enjoy lunch like a Lyonnais (or a Lyonnaise) in a cozy, authentic-looking setting. Immensely popular, and for good reason, is the first creperie to open in Japan, Le Bretagne. They also serve wonderful Brittany-style buckwheat galettes and have a wide selection of fine ciders. Aside from the bakeries, if it’s cheese you’re after, then this is the neighborhood to be in. Fromagerie Alpage is arguably the pick of the bunch. It may be small but packs a strong cheesy punch with helpful, knowledgeable staff and a hefty selection of European produce. A Touch of Tradition

Maintaining the ambience of a bygone era, the tight, maze-like cobblestoned back alleys of Kakurenbo Yokocho and Hyogo Yokocho are home to real gems of the Japanese dining industry. The numerous, elegant ryotei (luxurious traditional restaurants) – many in former samurai homes hidden behind long, black-lacquered wooden walls – specializing in high-end kaiseki cuisine and geisha entertainment, are akin to establishments you would expect to find in Kyoto. For added ambience, go down Atami-Yu Kaidan (also known as Geisha Alley) and Kenban Yokocho where the appropriate twangs of shamisen being strung can occasionally be heard echoing out from a rehearsal hall before dropping into the Atami-yu bathhouse for a traditional soak. If you’ve worked up an appetite, but the price and exclusivity of many of the ryotei make you balk, take a walk over to Kagurazaka Kado, a refurbished, early Showa-era residence that doubles up as an affordable kappo restaurant and standing bar. 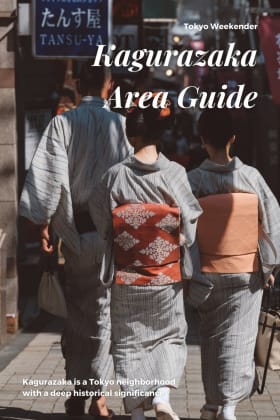 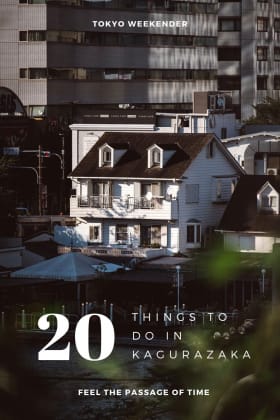