In the early ‘80s, Harlem-native John G. Russell was at a Tokyo psychiatric ward, visiting the ward’s patients as an anthropology grad student at the time. While among them, a different kind of psychosis emerged — Japan’s version of blackface appeared on Japanese TV. “What is this?” he asked, struck by the strange black figures on the screen. Russell was familiar with Japan’s literary portrayal of Black people, but since he didn’t have a TV at his Tokyo home, this was the first time that he had seen blackface on Japanese TV.

After returning to the States to finish his Ph.D. at Harvard University, Russell became keenly attentive toward the presence of Japanese politicians in American media. “Almost every year, you had a Japanese politician saying something nasty about Black folks,” he says. The various racist statements that Russell cited were like American zombies crawling out shallow graves: “NAKASONE PUTS FOOT IN MELTING POT,” read a 1986 Chicago Tribune headline. During a televised Liberal Democratic Party meeting, then-Prime Minister Nakasone Yasuhiro said, “Since there are Black people, Puerto Ricans and Mexicans in the United States, its level of intelligence is lower on the average.” He cited Japan’s supposed homogenous population as an advantage over the West, describing Japan as a “high-level information society.”

A 1990 New York Times headline captioned, “Racial Slur by Japanese Aide Rekindles Anger.” According to the article, the then-Justice Minister Seiroku Kajiyama was monitoring a Tokyo police raid that ended with the arrest of foreign women charged with sex solicitation. Kajiyama, while comparing Blacks to foreign prostitutes, evoked white flight. “It’s like in America when neighborhoods become mixed because Blacks move in, and whites are forced out, they ruin the atmosphere,” he said. As widely reported, LDP policy chief Michio Watanabe famously blurted, “Japanese people take bankruptcy very seriously, but in America, where the use of credit cards is common, many Blacks file bankruptcy and just laugh it off, thinking they no longer have to pay anything at all from the next day. They’re so casual about it.” The disparaging remarks ignited The National Urban League and the Congressional Black Caucus to threaten a boycott against Japanese products. It also resulted in several demonstrations by members of Japan’s Black, ethnic Korean and Burakumin community, which included a march on the Justice Ministry and a 24-hour sit-in in Ginza’s Sukiyabashi Park.

“This needs to be looked at,” says Russell. As an anthropology professor at Gifu University, Russell continues to teach, frequently write and publish, and this year he made his first TV appearance on NHK addressing a controversial Black Lives Matter animation clip. On the topic of race, Dr. Russell is one of Japan’s most preeminent scholars and is a leading figure within the island nation’s Black community.

Between the mid-1980s and early ‘90s, in the highly competitive global economic ring, Japan and America were in a bloody deathmatch. Both countries were accusing each other of being biased against Blacks to deflect their own racial problems. While American journalists were pointing fingers at the racial gaffes of Japanese politicians, the Japanese were pointing at Rodney King and anti-Japanese rhetoric. “Americans and Japanese calling each other racists is like two prostitutes calling each other fornicators,” Russell wrote in his 2015 essay, “The Other as Racist.” After receiving his Ph.D., Dr. Russell came back to Japan and interviewed more than a hundred Black people from America, Canada and Africa. While researching the country’s history, social-economic hierarchy and Japan’s marginalized Black community, Russell’s colleague invited him to a private upscale art show that featured the work of a white American photographer who took crime scene photos. In front of images of abject poverty and murdered corpses, some of them black and brown. Russell, discussing his research with one of the attendees, pointed out that the exhibit contributed to the perpetual stereotypes that Japan had about Blacks. The attendee, a publisher, suggested that Russell write a book, which became Japanese Views of Blacks: The Problem is Not Just Little Black Sambo (1991).

Written in Japanese, the book was a comprehensive study focusing on Japanese images of Black people. “The prevalent belief in Japan has been that racism is something that Japan has been free of. Racism is something that you find in America and Europe, but Japan doesn’t have the history and legacy of slavery and Jim Crow.” That’s not true, but that’s the perception, which is helped by the fact that racism in Japan tends to be viewed, as well as in America, as a black and white thing.

Japan’s racism isn’t necessarily directed only at Black people. It’s also directed at other Asians,” he says. Though Japan’s curated image is of a homogenous nation, groups like the Ainu, Burakumin, ethnic Koreans and Chinese, and Okinawans are excluded. “It’s hard to distinguish them from majority Japanese, so that kind of feeds into this myth that ‘Japan is monolithic, it’s monocultural, monoracial and therefore it lacks minorities,’” says Russell. “The discrimination that these groups face is comparable to Blacks in America … a point that was raised by the poet Langston Hughes in the 1930s when he visited Japan. Hughes, noting the press treatment of Koreans, made it analogous to the treatment of Blacks in the American press.” By aligning American slavery with Japan’s 30-year occupation of Korea, Russell exposes the parallels between the two countries. “One of the things that I think unites racisms, is that there is a history of exploitation, of subjugation,” he says.

“Western media characterizes Japan’s protests as a form of solidarity with the U.S., not as a direct response to Japan’s own racial problems.”

Just as Blacks were enslaved in the States, Koreans became wartime laborers. Just as Black women were raped, tortured and subjected to unethical medical experiments, the Japanese Imperial army forced some Korean women to work in wartime brothels against their will, later to be known as “comfort women.” Because Korea was colonized, “There’s a sense of superiority that Japanese feel towards Koreans and ethnic Koreans, so that carries over into how Japanese perceive Black folks who were also a subjugated people,” says Russell.

Asked if Japan’s Black Lives Matter protests are an imported American trend that people mimicked, Russell says, “I think many of Japanese demonstrators are motivated by real concerns about, not only racism in America, but also manifestations of racism in Japan. You see this in social media, which is also a haven for hate speech, but you also see push back against that and it’s coming from other Japanese.” Russell has lived in Japan for the past 30 years. To bridge the artificial boundaries that separated Asian, Black and American studies as a Black anthropologist has been, as he says, “lonely.” Now he encounters a plethora of students, teachers, writers and activists that he has undoubtedly taught and inspired.

Since George Floyd’s murder in 2020 at the hands of white police officers in Minnesota, activists across Japan formed coalitions and marched for Black Lives Matter. In Tokyo and Osaka, participants have been in the thousands. In rural towns where they lacked in numbers, their passion made up the difference. Western media characterizes Japan’s protests as a form of solidarity with the U.S., not as a direct response to Japan’s own racial problems. Professor Russell, commenting on the mass of Japanese people protesting, says, “I don’t think they get enough credit.” 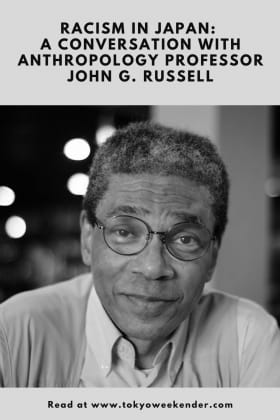